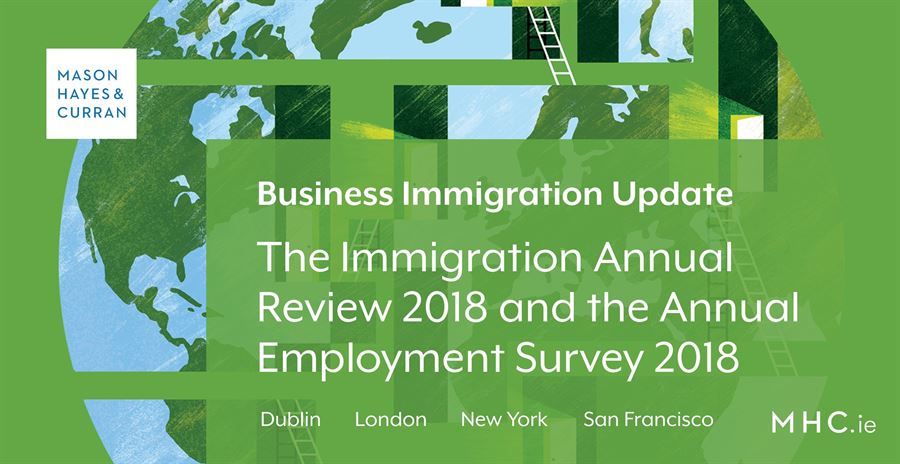 The Minister for Justice and Equality has recently launched the Immigration Annual Review 2018 (the “Review”) providing an insight into the statistics linked to immigration in Ireland. The Review also highlights the policy and operational developments which occurred during 2018 and provides an overview of the key focus areas for 2019 to help deal with the increased number of visa and work permit applications being processed.

Alongside this Review, the Department of Business, Enterprise and Innovation has also released the Employment Permit Statistics 2019 (the “Statistics”) (together the “Reports”) providing the latest statistics on the types of permits, nationalities of applicants and the companies that permits have been issued to so far this year.

To no surprise, the statistics highlighted in the Reports confirm Ireland’s appeal is on the rise with more and more foreign nationals looking to invest, visit, work and study in Ireland.

The Review confirms a 12% increase in the number of visa applications processed and an 11% increase in the number of foreign national’s granted residency in Ireland. The largest number of applications came from China, India, Indonesia, Nigeria, Pakistan, Philippines, Russia, Saudi Arabia, Turkey and the Ukraine with these individuals contributing to the diversity of our nation and to our economic, social and cultural development.

The total amount of employment permits issued for the period of January to August 2019 was 11,169. This is an increase of 3,126 permits compared to the same period in 2018 during which 8,043 permits were issued. Of the total 11,169 permits issued to date this year, the overwhelming majority have issued for the service industry sector.

140,533 visa applications were made in 2018, evidencing a 12% annual increase. This is no surprise due to Ireland’s strong economic performance and the introduction of new flight destinations to and from Ireland. The top ten countries of applicant origin for visa decisions in 2018 were: India, China, Russia, Pakistan, Nigeria, Turkey, Philippines, Ukraine, Saudi Arabia and Indonesia.

Two new schemes were introduced in 2018 to assess people’s applications before they travel to Ireland. The first scheme is The Minister of Religion Scheme which allows Ministers to work with an eligible religious body or faith community in Ireland. 123 applications were made under this scheme, 81.5% of which were successful.

The second scheme is The Volunteer Scheme, which allows people to carry out volunteer work for registered charities in Ireland. 209 applications were made under this scheme with 81% being successful.

The statistics in the Reports no doubt confirm that Ireland’s appeal is on the rise with an increase in the number of individuals looking to invest, visit, study and work in Ireland.

The Review attributes Ireland’s strong economic performance together with the increase in the number of flights to and from Ireland as the contributing factors for the increased number of foreign nationals in Ireland.

This increased number of foreign nationals will continue to benefit the country greatly by providing a highly skilled and diverse workforce. These individuals are adding to the competitiveness in the workforce, expansion in the growth potential of the economy and increasing cultural and social development. As numbers of such highly skilled and diverse workers continue to rise, so too will the benefits for Ireland.

For more information, contact a member of our Business Immigration or Employment & Benefits teams.