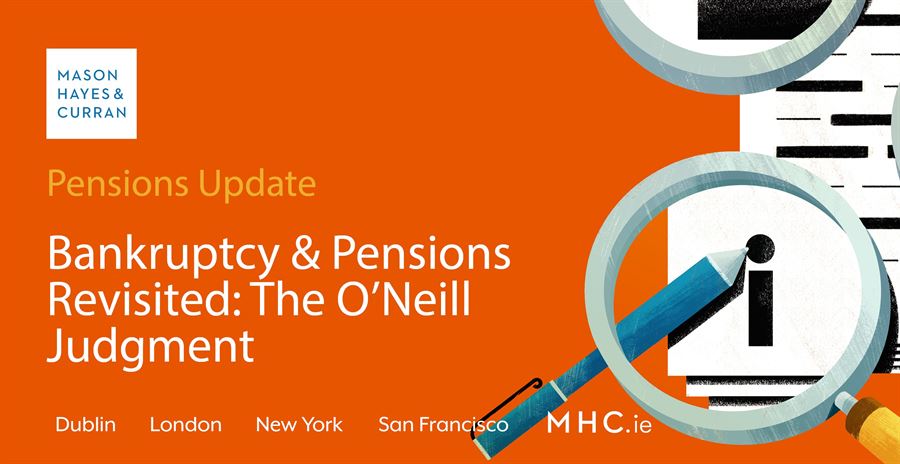 Mr. O’Neill held a Buy-Out-Bond (BOB) with a pension provider. The retirement options were standard for such a product; allowing for the purchase of annuity, or investment in an Approved Retirement Fund (ARF) or Approved (Minimum) Retirement Fund (AMRF) as well as providing for taxable and non-taxable lump sum entitlements. Mr. O’Neill denied any entitlement of his official assignee (OA) in bankruptcy in exercising the retirement options provided by his pension where a Bankruptcy Payment Order (BPO) pursuant to s85 of the Bankruptcy Act 1988 (Act) had not been obtained.

It was agreed that as Mr. O’Neill was discharged from bankruptcy at the time of the hearing, an application for a BPO could no longer be made. On that basis, the OA sought directions from the High Court pursuant to the Act as to whether a BPO is required for any lump payable for a pension held by a bankrupt or former bankrupt. The case centred on the interpretation of s44 and s44A of the Act which relate to the vesting of property in an OA and pensions in bankruptcy respectively.

However, s85D of the Act provides that an OA must make an application to the High Court for a BPO to collect ‘income’ due to the bankrupt. Any such application for a BPO may not be made after a bankrupt has been discharged from bankruptcy.

Background of the case

Mr. O’Neill was adjudicated bankrupt in 2014 and was automatically discharged from bankruptcy in 2016. The grounding affidavit of the OA was sworn in January 2019, the named respondents on the notice of motion were Mr. O’Neill and the provider of his BOB.

Mr O’Neill provided an expert’s report which concluded that, insofar as the Taxes Consolidation Act 1997 (TCA) was concerned, all pension distributions should be regarded as Schedule E ‘income’. He also pointed to the fact that the terms ‘income’ as well as ‘an amount of money other than income’ were not defined terms in the Act. If Mr. O’Neill’s interpretation were applied, it would require the OA to make an application to the High Court for a BPO for any income or lump sums, tax-free or taxable, payable from the scheme. As Mr. O’Neill was discharged from bankruptcy at the time of hearing that would not have been possible.

Throughout her Judgment, Ms Justice Pilkington refers to Costello J’s judgment in Lehane (as Official Assignee) v. James Coady & Aviva Life & Pensions Limited (Coady). In that case, it was held that a 25% tax-free lump sum was an ‘amount of money other than income’. On that basis, the OA in that case was found to be entitled to this amount without applying to the High Court for a BPO. However, Costello J also found that any annuity from the pension arrangement was ‘income’. This meant that the OA could only claim an annuity for the creditors of the bankruptcy estate by making an application for a BPO within the required period.

Ms Justice Pilkington refers to the fact that Mr. O’Neill had already opted to set up an AMRF as part of his BOB retirement options. The Judge confirmed that any monies accruing to Mr. O’Neill from the AMRF constituted ‘income’ for the purposes of the Act. This meant that the OA would require a BPO pursuant to the provisions of s85 of the Act to gain access to that income. However, Ms Justice Pilkington chose to follow Coady when it came to the 25% lump sum entitlement and also held that any taxable lump sum was ‘an amount of money other than income’ for the purposes of the Act. On that basis, she found that no BPO was required by the OA when exercising the option to draw down that amount. In this, she was supported by the position adopted by the Revenue Commissioners who were a notice party to the OA’s application. The judge noted that “The Revenue confirm and acknowledge that whilst a number of different payments arising from the pension product may be taxable under Schedule E that does not mean that all payments come under the single umbrella of a definition of “income”.

This Judgment confirms the interpretation of the relevant sections of the Act adopted in Coady and extends it to taxable lump sums. Where a bankrupt is in receipt of an annuity or income arising under an ARF or AMRF Fund then the OA must apply to the High Court for a BPO upon adjudication or within 5 years of that date. However, it is now that case that the OA is entitled to access any lump sum that becomes payable on adjudication or within 5 years without making an application for or obtaining a BPO.

This Judgment builds on the decision in Coady and provides a detailed analysis of the pension sections of the Act. It is now certain that all pension lump sum entitlements that accrue on the date of adjudication or within five years of that date are fair game for creditors without the need for a BPO application to the High Court. Where anyone is facing bankruptcy or personal insolvency it is crucial that advice is obtained promptly so that preparations can be made for managing income and assets and dealing with the Official Assignee.