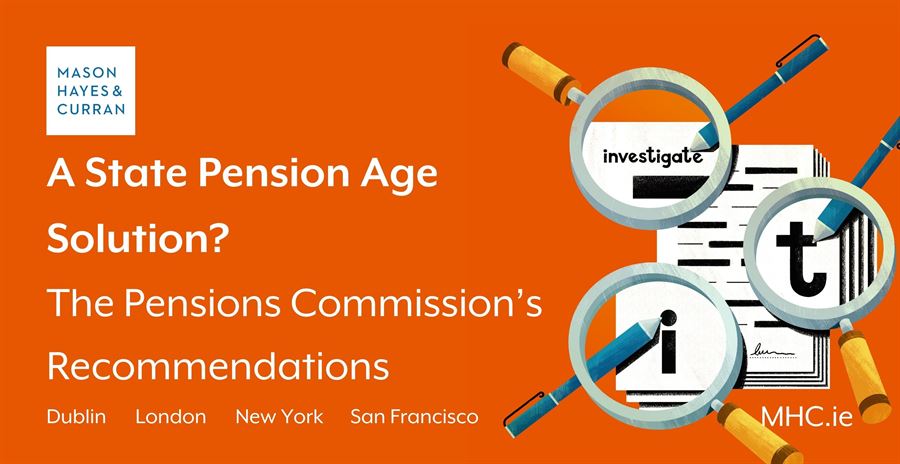 The Pensions Commission (Commission) Report has been published and it contains a range of recommendations that attempt to ensure that the State Pension remains manageable for the State for the next few decades.

The Commission has recommended the creation of a separate “State Pension” account as part of the Social Insurance Fund with 10% of pension expenditure being paid to it per annum. To allow for this, the Commission has recommended a gradual increase in the level of PRSI for self-employed individuals to 10% by 2030 and to 12.5% by 2050. It has also recommended an increase of employer and employee PRSI contributions of 1.35% starting in 2030 and ending in 2040.

The Report also contains a recommendation to introduce legislation that will allow employees to remain in employment until the State Pension age if they wish. To facilitate this, the Commission has recommended the preparation of guidance for those who wish to work past their normal retirement date.

The Commission also addresses those that look after others on a long-term basis. It recommends that those performing unpaid caring duties for more than 20 years be permitted access to the State Pension by having retrospective social insurance contributions paid for them by the Exchequer when approaching the State Pension age. This would aim to deal with any gaps in their contribution history due to unpaid caring work. To achieve this, the Commission suggests that consideration should be given to the creation of a “Family Carer Register”.

Last month, the Minister for Social Protection, Heather Humphreys noted that “very difficult decisions are going to have to be made” when it comes to the State Pension. She noted that the aim of Government is to ensure that younger workers obtain the same benefits as those that are retiring today. She stressed that this was at the “heart of the decisions” that will need to be made.

There is no question that a sustainable State Pension needs to be implemented as soon as possible to prevent a future pension crisis. However, the State Pension age has become a political football in recent years and it is unlikely to disappear from election manifestos.

For more information contact a member of our Pensions team.