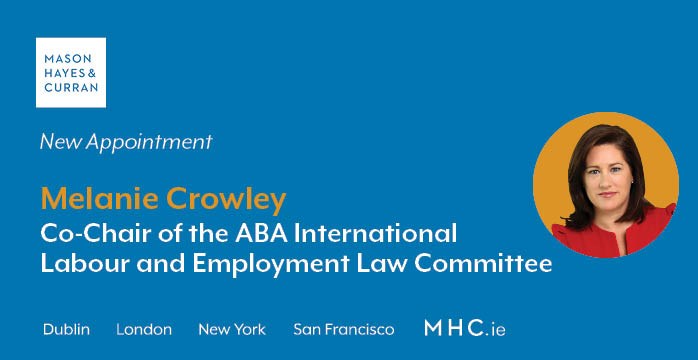 We are delighted to announce that Melanie Crowley, Head of our Employment Law team, has been appointed by the American Bar Association as Co-Chair of their International Labour and Employment Law Committee.

Founded in 1878, the American Bar Association (ABA) is one of the world's largest voluntary professional organizations with over 400,000 members. The Labour and Employment Law section members represent all perspectives of labour and employment law, including employers, employees and government.

Melanie has been a member of the ABA for over 17 years, and has featured as a speaker and panellist at numerous ABA conferences. In addition to heading up Ireland’s leading employment and benefits practice, Melanie is the go-to Employment lawyer for some of Ireland’s and the US’s biggest companies and employers.

Commenting on her appointment, Melanie said “I am honoured to have been asked by the ABA to take on the role of Co-Chair of the International Labour and Employment Law Committee. The ABA is a proud representative of the legal profession, with the goal of serving both their members and the public with law-related resources and updates on legislative developments. I look forward to working with the International Labour and Employment Law Committee to further promote this goal.”