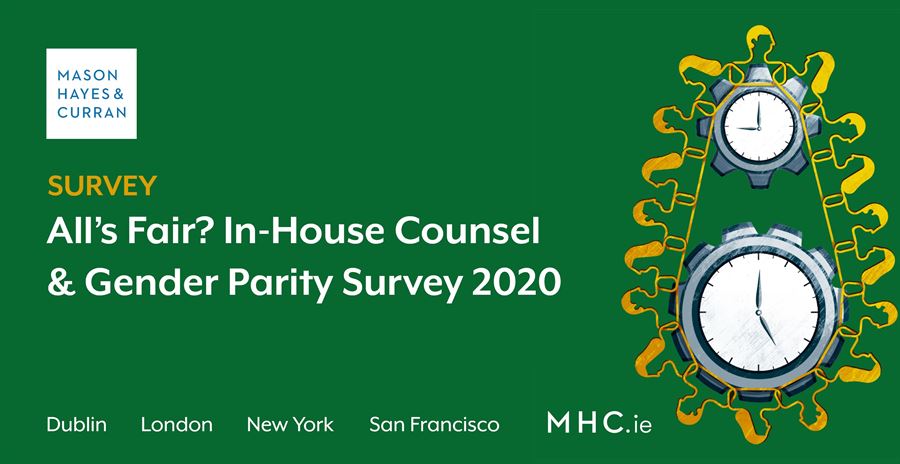 We are delighted to release the results of our All’s Fair? In-House Counsel and Gender Parity Survey 2020. Some of the key findings include a large disparity in the perception of the gender pay gap between male and female in-house lawyers, with more than double the number of women (58%) than men (27%) believing it is an issue in their industry. Also a significant number of female in-house lawyers (32%) took on the majority of the caring responsibilities during lockdown, compared to 7% of men. Now in its third year, the survey gathers data on the views of in-house lawyers on areas such as the gender pay gap, female representation at senior levels as well as their views on how the pandemic has changed their working lives.

The survey data seems to show that male in-house lawyers are not engaging with the issues around the gender pay gap, with 73% of men saying that they either don’t believe the pay gap is an issue in their industry or that they don’t know if it is an issue. “Addressing the gender pay gap brings tangible benefits to businesses”, commented Vanessa Byrne, Partner and Co-Head of Real Estate, Mason Hayes & Curran LLP. “An organisation that is proactive about addressing this can avoid reputational damage and will have greater access to pools of talent. Taking action on the gender pay gap could also mitigate against the risk of cases being taken against organisations for unequal pay.”

Despite the doubts expressed by some in the survey about the existence of a pay gap, a majority of both men and women believe that the publication of gender pay gap data is a positive development, with 92% of women and 56% of men in support. However, a significant minority of men (28%) don’t believe it is a positive development, with one respondent commenting that they are unsure what publication will do to improve the situation in practical terms. The number of companies who have carried out an analysis of their gender pay gap in advance of legislation coming into effect has increased slightly, and stands at 30% compared to 23% in 2019. But the survey shows that many organisations still need to put in some groundwork to prepare for the introduction of legislation.

As with previous years, there is a strong belief in the 2020 survey that the “motherhood penalty” is one of the main reasons for the gender pay gap. “42% of women and 44% of men cite women being the main carers for children and other family members as the main reason for the gender pay gap”, continued Ms Byrne. “The recent news that Government is looking at further extending parents’ leave for mothers and fathers is to be welcomed, however there still seems to be a cultural issue around men taking longer periods of parental leave. Changes need to take place both in organisations and in homes to normalise men staying at home to look after their children.” Many comments by respondents point to a model of shared maternity/ paternity leave as a possible solution, with one commenter saying this would “either remove the unspoken bias against women taking time off for caring responsibilities, or increase the level of caring duties taken on by men.”

The majority of both men and women who were surveyed report that they have caring responsibilities with the home, but nearly 5 times more women (32%) than men (7%) say that they shouldered the majority of the caring responsibilities during lockdown. Women also seem to be more concerned about the effect the pandemic and remote working will have on their career, with 41% of women worried about the effect on their future salary increase prospects compared to 33% of men.

“2020 will be a year that many of us will not forget quickly, and the changes it has brought about to our working lives will be felt for some time to come”, said Vanessa. “It is heartening to see improvements from year to year in terms of female representation at senior levels, but the challenge now for organisations is to not allow remote working to hamper these advancements. Research has shown that better female participation in leadership teams can lead to better financial performance, which will be key as organisations rebuild in the aftermath of the pandemic.”