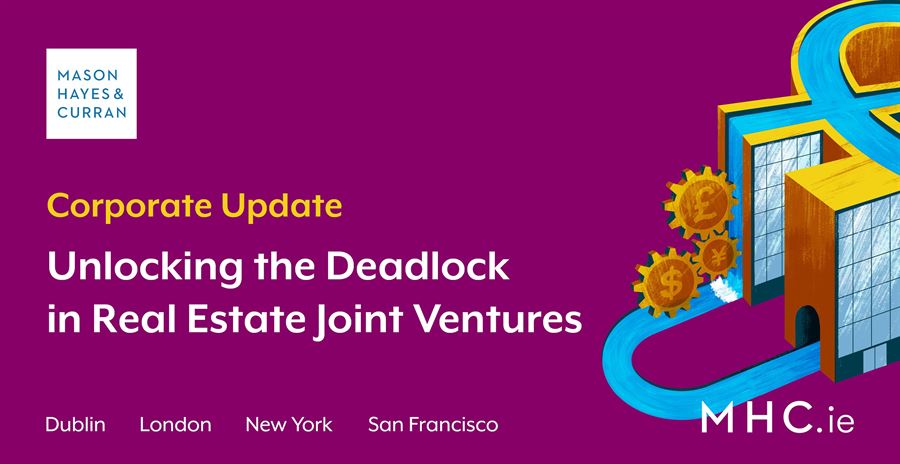 For as many reasons as parties might come together in the first place to form a joint venture (JV) for the development or construction of a project or indeed for the establishment of a new business, there are a multitude of reasons as to why a JV might come apart. Most often this happens due to some form of a dispute arising between the JV partners.

In a 50:50 JV, achieving complete agreement in decision making is not always possible. As a result, there is always a risk that the parties might encounter deadlock on an issue requiring approval from both of the JV partners in order for the project or business to move to the next phase. A deadlock can arise where, for example, there is failure, either at board level or shareholder level, to agree on an issue after two management or shareholder meetings or there is a failure to agree a budget within a stated period. What may or may not constitute a deadlocked matter will generally be defined upfront in the JV agreement itself.

Who holds the key?

To reduce the risks of a paralysis in the operation or business arising and to avoid a lengthy and costly dispute before the courts, it is generally prudent for the JV parties to consider how potential deadlock should be addressed.

Generally, where a deadlock is encountered in a JV arrangement, a multi-tiered dispute resolution mechanism can involve an “escalation” process which, if unsuccessful, can be followed by the “compulsory buy-out” or “divorce” mechanism.

If an escalation process does not work, then there are some other possible approaches available before the JV parties might be forced to resort to the courts, arbitration or legal remedies.

The receiving party then has a period in which to accept the offer made in the notice or reject it, in which case the roles of seller and buyer are reversed.

This method ensures that a realistic price is fixed by the initiating party, as that party may have to sell its shares or buy the other party’s shares at the price stated in the notice. It also avoids a third party valuation process and can therefore be relatively quick to implement.

However, it is a mechanism that is inherently risky and is really only suited to a two-party venture where the parties are roughly of equal strength. A stronger initiating party could manipulate the process where it knows that the receiving party is not in a position to fund the counter-offer.For this mechanism to be palatable in its implementation, there must also be a degree of indifference for each JV party as to whether it realises its investment or increases it.

In this version, the initiating party may serve a purchase notice on the receiving party that it is willing to buy out the other and setting the price at which it is prepared to buy. The receiving party then has a period in which to serve a counter notice, stating that it either is prepared to sell at the price contained in the purchase notice; or wishes to buy the interest of the initiating party at a higher price.

If the latter situation occurs and both wish to buy, then a sealed bid system is used with the party who bids highest being entitled to buy out the other.

This is a starker mechanism than the Russian Roulette procedure. It is more open to misuse where one or other party does not have the resources or desire to buy, requiring a strong nerve in that case to increase a low opening price.

Buy-out based on a pre-determined price/formula

Another option is for the JV parties to negotiate a specific upfront mechanism in the JV agreement for a potential buy out by one JV party of the other JV party by reference to a predetermined price or formula.

If the venture has irretrievably broken down, the parties may determine that the JV should simply be wound up and the assets distributed. In the case of a corporate JV, it would be implemented through a liquidation process.

This solution has the advantage of being so drastic that it concentrates the minds of the parties to find a solution to the issue, rather than let the venture die. However, a liquidation is not always suitable in every situation and to invoke it can have tax consequences for the parties.

In reality the ‘Russian Roulette’ or ‘Shoot-out’ mechanisms can be blunt instruments. Although these mechanisms are often negotiated and drafted into JV agreements, they are rarely used in practice. The winding up mechanism can also prove to be slow, costly and time consuming. In any event, this option is likely to represent an end-game scenario for the joint enterprise.

Often, it is in fact the in-built potential of deadlock arising that might be the strongest structure to force a resolution of the deadlock between the JV parties. Therefore, instead of spending time negotiating compulsory buy-out mechanisms, JV parties might opt not to provide for a solution, or at least avoid a compulsory buy-out mechanism, in the JV agreement on the basis that the parties are forced to find a solution to the issue themselves.

In any event, there is no one preferred method and whether deadlock provisions in JV agreements should involve straight-forward or multi-tiered dispute resolution mechanisms, will depend on the relationship, circumstances, bargaining-position and motivations of the JV parties at the time of negotiation of the JV agreement.