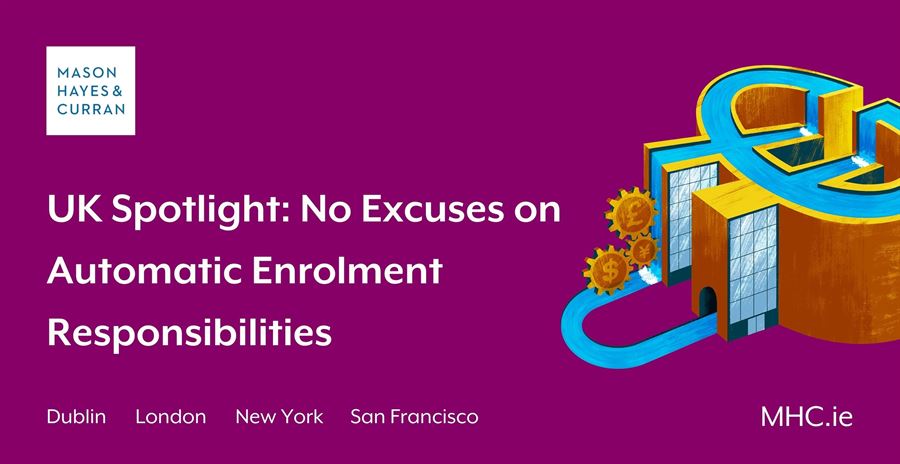 The Pensions Act 2008 (Act) provides that all employers must enrol certain workers into a workplace pension scheme, also known as automatic enrolment (AE). All employers in existence on 1 April 2012 had to begin AE duties before April 2017. The duties of IVI Metallics Limited (Employer) commenced in 2016.

Under the Act, employers that are required to provide a pension scheme must:

The Applicants in the determination were enrolled in the IVI Metallics Group Scheme (Scheme) in August 2016. During 2017 and 2018, the Applicants noticed that their monthly contributions had been deducted but had not been remitted to the Scheme. A “collective grievance” was raised by one of the Applicants and they contacted the Pensions Ombudsman (TPO). In February 2019 the Employer was bought by Vulcan Industries plc. At that point, it informed employees that it would still operate under the same name, but that ownership of the company had changed. In that notification it acknowledged that there had been a “lack of payments to the pension provider” as it was dealing with “stretched cashflow”. It also noted that it planned to continue to pay contributions to the Scheme and that it would make extra payments for the missing contributions.

The view of the adjudicator

When the matter was dealt with by a TPO adjudicator, the Employer argued that it had been impacted by the pandemic and by Brexit. The Employer also noted that it had continued to make payments to the Scheme as well as additional payments to make up for the missed contributions. However, it had submitted that it would not be in a position to compensate employees for the fact that contributions were not made in time.

Findings of the TPO Adjudicator

The TPO adjudicator found that:

The Employer argued that it could not pay the missing contributions within the 14 day limit suggested by the adjudicator and so the matter was heard by TPO.

TPO upheld the Applicants’ complaint and stated that each Applicant was entitled to redress to remedy the financial injustice suffered. As well as agreeing with the adjudicator’s view, he suggested that the pension provider calculate any loss of investment gains from the due date of each contribution to the date of actual payment. That amount, the TPO said, should then be paid by the Employer to the Scheme within 21 days of receiving the confirmation from the pension provider.

According to the Central Statistics Office, almost six in every ten workers, 59.8%, had pension coverage in Quarter 3 2019. This means that over 40% of the working population is relying solely on the State pension as a source of income in retirement. In the Roadmap for Pensions Reform 2018 – 2023, there was a commitment by the then government to develop an AE system for Ireland by 2022. A change in government in the meantime as well as the pandemic, has put this in doubt.

We are unlikely to see AE introduced in Ireland until 2023 at the earliest. When it is introduced, it will mean that those employees who have not made provision for retirement and who meet certain age and earnings criteria will be automatically enrolled into a State sponsored supplementary retirement savings system which will contain an opt-out provision. It would also mean that all employers that do not provide a pension that meets a certain standard will need to provide a workplace pension for AE eligible employees. The determination of The Pensions Ombudsman is an indication of how important it will be for employers to become familiar with their legal and regulatory obligations when AE is finally introduced.

Many Irish employers do not operate a pension scheme and instead meet the minimum legal requirement by providing employees with access to a PRSA. When AE is eventually introduced, employers will need to ensure that they understand what is required in terms of assessing their workers for enrolment, communicating with employees on AE and contributing to the scheme.

For more information or if you would like to discuss the potential impact of this issue on your business, please contact a member of our Employment & Benefits team.