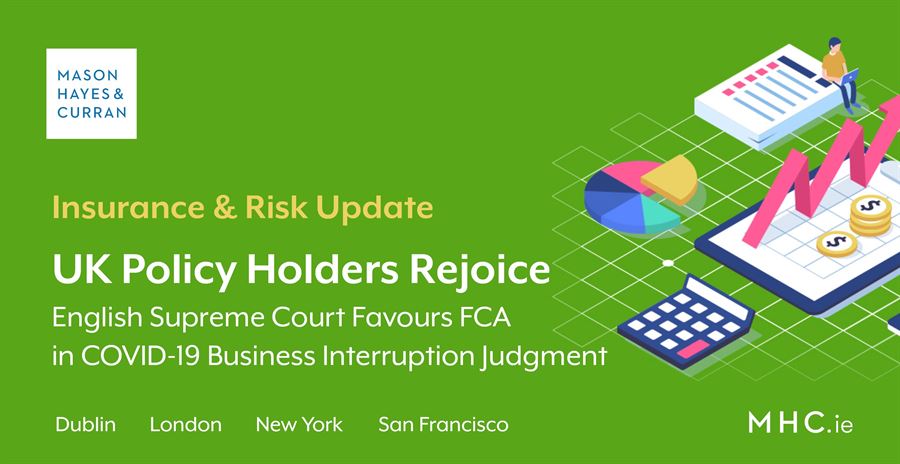 The English Supreme Court has handed down judgment in appeals taken by the UK Financial Conduct Authority (FCA), and a number of insurers against last year’s decision of the English High Court in a case concerning the interpretation of various business interruption clauses. The Supreme Court substantially allowed all of the FCA’s appeals and dismissed those of the insurers. This is significant as it means that thousands of policy holders in the UK will now be able to access cover for business interruption losses arising from the COVID-19 pandemic.

The High Court considered 21 sample wordings from eight insurers and the resulting judgment was seen at the time as a victory for the FCA. However, the FCA and the Hiscox Action Group later appealed on a number of issues on which they did not succeed.

We review the issues which the Supreme Court considered in reaching its judgment.

The interpretation of disease clauses

Disease clauses usually provide cover for business interruption losses caused by the occurrence of a notifiable disease at or within a specified distance of the policyholder’s business premises.

In considering the disease clause of the RSA policy, the Supreme Court interpreted it more narrowly than the High Court and the FCA. They accepted the insurers’ contentions that each case of illness sustained by a person as a result of COVID-19 is a separate “occurrence” and that the clause only covers business interruption losses resulting from cases of disease which occur within the specified radius. However, this narrow interpretation of the disease clause by the Supreme Court must be read in conjunction with its assessment of the causation issues, as discussed below. This meant that the Supreme Court ultimately reached a similar conclusion to the High Court.

The interpretation of prevention of access and hybrid clauses

The Supreme Court did not agree with the High Court’s interpretation that measures imposed by a public authority, to restrict access to a premises, must be mandatory and have the force of law. The Supreme Court considered that an instruction by a public authority may fall under the policy wordings if there is an imminent threat of “legal compulsion”, or where it is expressed in mandatory and clear terms.

The Supreme Court rejected insurers’ contention that the “but for” test should be applied to causation in the context of business interruption losses. Insurers had argued that, because of the very nature of a pandemic, policyholders would have suffered the same business interruption losses even if the insured risk, e.g. the occurrence of the disease within a specified radius, had not occurred.

The Supreme Court found that the “but for” test was not always appropriate and that it was not appropriate in this case. It noted that, in some situations, a series of events together  cause a result although none of them would be by themselves necessary or sufficient to cause the result.

Most of the policy wordings considered included trends clauses. These clauses are used in the calculation of business interruption losses by allowing an adjustment of business for the previous year by reference to trends or circumstances. Insurers argued that they should be allowed to consider the effects of the COVID-19 pandemic. However, the Supreme Court found that the trends and circumstances requiring adjustments to be made  do not include those arising out of the  same  underlying or originating cause as the  insured risk – in this case the effects of the COVID-19 pandemic.

The Supreme Court disagreed with the High Court’s finding that, where there was an effect on turnover due to COVID-19 before the insured risk was triggered, then the continuing effect of that downturn could be considered as a “trend or circumstance". They reiterated that only circumstances unconnected with COVID-19 should be considered.

This well-known decision arose out of a claim for business interruption losses when a hotel was damaged during Hurricane Katrina. The High Court, on appeal from an arbitration tribunal, held that cover did not extend to business interruption losses which would have been sustained anyway as a result of damage to the city of New Orleans even if the hotel itself had not been damaged.

The Supreme Court in the present case held that the Orient Express case was wrongly decided and should be overturned.

The Supreme Court judgment is certainly a victory for the FCA and the UK policyholders who eagerly awaited its delivery. In practical terms, it means that thousands of policy holders in the UK will now be able to recover for losses arising from the COVID-19 pandemic. The FCA estimates that the effect of the judgment will be seen not just in relation to the policies specifically considered by the Supreme Court but also potentially 700 other types of policies issued by 60 UK insurers. UK insurers and policy holders alike will no doubt be reviewing their policy wordings in light of the judgement and the cost to insurers is likely to be extremely significant.

Delivery of the decision of our own High Court here in Ireland was postponed to allow the parties to make submissions after considering the UK judgment. The decision is now due to be delivered on 5 February 2021 and insurers are likely to be apprehensive about the outcome.

For more information on the impact of COVID-19 on your businesses operations, contact a member of our Insurance & Risk team. 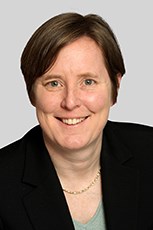