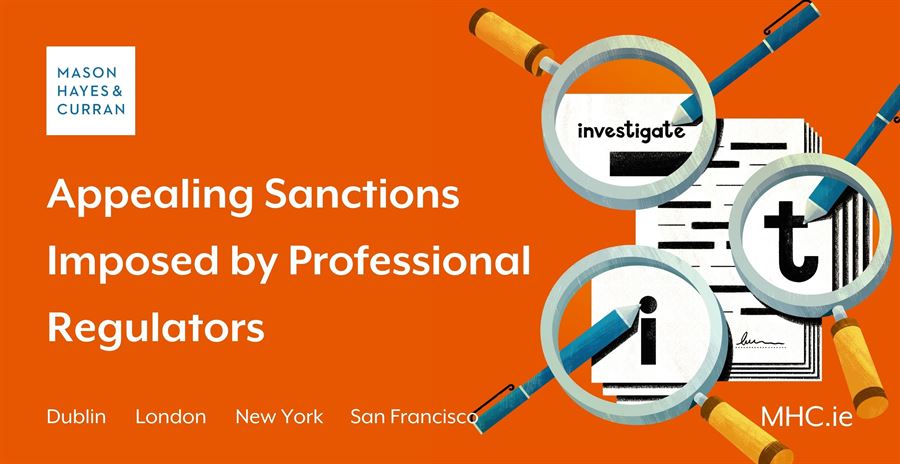 The Regulated Professions (Health and Social Care) (Amendment) Act 2020 (2020 Act), which has almost fully come into force, provides doctors, nurses, and other health and social care professionals with a right of appeal against all sanctions, including advice, admonishment, or censure, although the relevant section amending the Medical Practitioners Act 2007 has not been commenced as of the date of this ezine. The changes brought about by the 2020 Act will be welcomed by professionals. For some, the changes brought about by this Act won’t come soon enough, as the recent case of Ahmed v the Medical Council shows.

A health or social care professional may want to challenge the imposition of a sanction, even if there are no restrictions on their professional practice. The Medical Practitioners Act 2007 (2007 Act) currently does not allow registered medical practitioners to appeal lesser sanctions like written advice, admonishment, or censure to the High Court. The Nurses and Midwives Act 2011, and the Health and Social Care Professionals Act 2005 contained similar restrictions. The 2020 Act gives a right of appeal to health and social care professionals where the sanction imposed is advice, admonishment, or censure. While the Act is substantially in force, the section amending the Medical Practitioners Act 2007 has not been commenced as of the date of writing. The 2007 Act allows other, more severe, sanctions to be appealed to the High Court, but the only option for registered medical practitioners to appeal these lesser sanctions is to judicially review the regulator’s decision. In the recent case of Ahmed v, the Medical Council, Dr Sajid Ahmed did just that.

The complaint against Dr Ahmed

Dr Ahmed was employed as an oncology registrar at University Hospital Limerick in 2012. A colleague made a complaint to the Medical Council about Dr Ahmed’s treatment of a patient who was transferred to the hospital with a large mass in his abdomen. It was alleged that Dr Ahmed failed to request basic tests including blood, urine and/or kidney function tests.

The Medical Council’s Fitness to Practise Committee made a finding in July 2015 of poor professional performance against Dr Ahmed. The sanction of written advice was imposed.

Dr Ahmed initiated judicial review proceedings to challenge the way in which the Fitness to Practise Committee reached its decision. Dr Ahmed alleged that the decision was irrational and not underpinned by any factual basis. One of the arguments made by Dr Ahmed was that the Medical Practitioners Act 2007 (2007 Act) was unconstitutional because there was no right of appeal against lesser sanctions. In support of his argument, Dr Ahmed sought to rely on the 2020 Act, which, of course, had not been passed as at the date of the finding against him. The 2020 Act amended the 2007 Act to provide doctors with a right of appeal, even where the sanction imposed is advice, admonishment, or censure. Dr Ahmed argued that the amendment was made to address the injustice that arose as a result of a blanket prohibition on appealing minor sanctions.

At first glance, it might seem that the 2020 Act has resolved the issue raised by Dr Ahmed in his proceedings. However, careful analysis of the legislation is required to establish whether the amendments made by the 2020 Act apply in all cases. For example, the amendment made by the 2020 Act to the Nurses and Midwives Act 2011 requires that all complaints made to the Nursing and Midwifery Board before 1 August 2021 to be to be dealt with under the terms of the 2011 Act as it was in force before that date. A similar provision is made in respect of the 2007 Act, although that section has not been commenced as of the date of writing. While health and social care professionals will welcome the changes introduced by the 2020 Act regarding appeal of sanctions, we expect that the case of Ahmed v The Medical Council will continue to be relevant to some health and social care professionals for some time to come.

For more information on the likely impact of the proposed changes on health care professionals contact our Public, Regulatory & Investigations team.