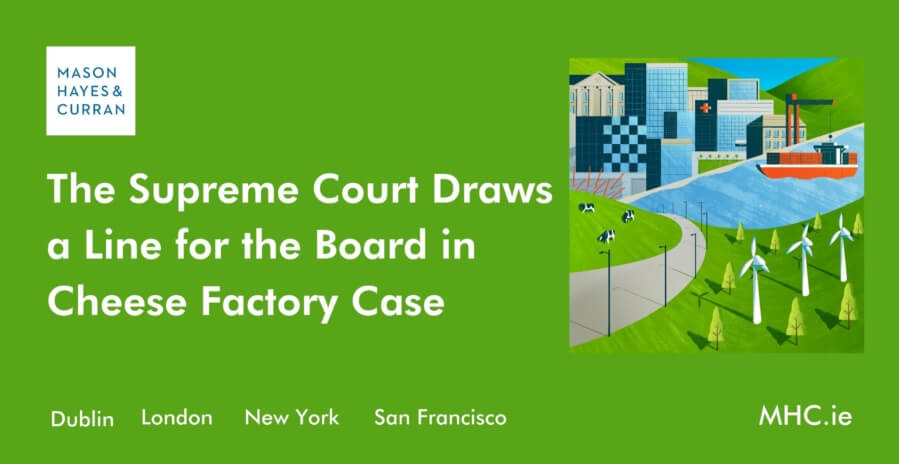 The Supreme Court delivered a judgment[1] on 16 February 2022 providing a level of certainty for the construction of a major cheese factory at Slieverue, Co. Kilkenny. The judgment determined several substantial issues raised by An Táisce challenging the grant of planning permission by An Bord Pleanála (ABP) on 30 June 2020. We look at the implications of this decision.

The case has been the subject of several judgments to date, most notably the judgment of Mr. Justice Humphreys dismissing the application for judicial review on 20 April 2021. These have been considered and are set out in more detail here.

At the core of An Táisce’s case is its contention that the scale and size of the proposed factory will undoubtedly lead to an increase in demand for milk, which can only be met by an expansion of the national herd leading to increased methane and other GHG emissions. An Táisce argues that amongst other things this is contrary to the path to a carbon-neutral society manifested in the Climate Action and Low Carbon Development (Amendment) Act 2021 (2021 Act).

The central issue of the appeal was whether ABP was under an obligation to assess the upstream consequences of the operation of the proposed factory, specifically, the milk necessary to supply the factory which was to come from circa. 4,500 independently run farms. In this respect, An Táisce focused on three main challenges: -

What is an indirect significant effect?

The Court focussed on the question as to whether implications for general milk production and, consequently, environmental emissions arising as a result, formed part of “indirect significant effects of a project” within the meaning of Article 3(1).

Whilst accepting the ABP determination that the project did not in and of itself create a demand for milk production, the Court acknowledged a potential link at an “elevated macro-economic level”. In this respect, the Court agreed with the Mr. Justice Humphrey’s determination in the High Court that the overall milk production assessment was to be considered in the manner provided for by s. 5 of the 2021 Act.

The Court identified issues arising from an open-ended interpretation of Article 3(1) on the range of indirect effects which would have to be assessed for EIA purposes, which would be entirely impractical and unfeasible in practice, referring to the impossibility of auditing or assessing the circa. 4,500 independently owned and operated farms.

The imposition of such an impossibly onerous and unworkable obligation on developers was cited as sufficient reason to dismiss an open interpretation of Article 3(1) in favour of a requirement that effects should be “firmly tethered to the project itself, so that the indirect significant effects to be assessed must be intrinsic to the construction and operation of the project.”

The Habitats Directive and AA

The issue of the Habitats Directive (Directive 92/43 EEC of 21 May 1992) and, specifically, whether the AA required under Article 6(3) was satisfactory for this purpose was considered.

An Táisce put forward three key challenges as to how the AA was deficient, which were considered in full:

The Court succinctly set out that the project requiring the AA was the cheese factory itself and not the farms supplying milk or indeed any other farms.

The Court applied the principle confirmed by the judgment from the Court of Justice in Sweetman5 that the AA “cannot have lacunae and must contain complete, precise and definitive findings and conclusions capable of removing all reasonable scientific doubt”.

The Court concluded that no gap was identified to hold the AA deficient, accepting ABP’s determination that the proposed development, by itself or in combination with other plans or projects, would not adversely affect the integrity of the European Natura Sites. In reaching this conclusion, the NIS, the Inspector and ABP did, to some extent, assess the potential indirect effects of the milk production on the Natura sites, although the Court held that they were not obliged to do so.

The Court went on to consider the application of the Water Framework Directive (WFD) (Directive 2000/60/EC), notwithstanding objections from ABP around An Táisce’s, right to raise this challenge.

An Táisce sought to rely on the judgment the Court of Justice in Bund für Umwelt und Naturschutz Deutschland eV (Weser)[3] , arguing that ABP was precluded by Article 4(1) of the WFD from granting permission for the cheese factory. In Weser, the Court of Justice held that, without an exemption, Member States were prevented from granting authorisation for a particular project where it may cause a deterioration of the status of a body of surface water. As with the other grounds of challenge, this argument was underpinned with the premise that the projected enhanced milk production from Glanbia farms should be regarded as part of a ‘wider project’ in assessing compliance with the WFD.

Whilst recognising the importance of maintaining the integrity of the watercourses, the Court considered that it would be entirely unrealistic to apply the principles in Weser beyond the limits of projected discharges into watercourses from the cheese factory itself, rejecting the appeal.

The Court recognised that, as appropriate, indirect effects of a project “where the causal connection between certain off-site activities and the operation and construction of the project itself is demonstrably strong and unbreakable” should be measured and assessed. However, based on the facts before, the Court concluded “that these effects are so remote from the present project that they cannot realistically be regarded as falling within the scope of Article 3(1).”

The Court found that the facts of the case identified no substantive gaps in the ABP obligations under Article 6(3) of the Habitats Directive rejecting the contentions raised by An Táisce. Finally, the Court dismissed the arguments advanced by the Applicants An Táisce in relation to compliance with the WFD, concluding, “the suggestion that the Board should consider and examine discharges from each of these 4,500 farms in order to ascertain compliance with the requirements of Article 4(1)(a) of the WFD prior to granting planning permission in the present case is, again with great respect, simply divorced from reality.”

This significant Supreme Court decision looks to strike a balance between progression towards a carbon-neutral society, manifested in the 2021 Act, and ensuring that legislative provisions, such as the EIA Directive, are not artificially expanded beyond their remit to this end.

If you would like to discuss any related queries, please contact a member of our Planning & Environment team.