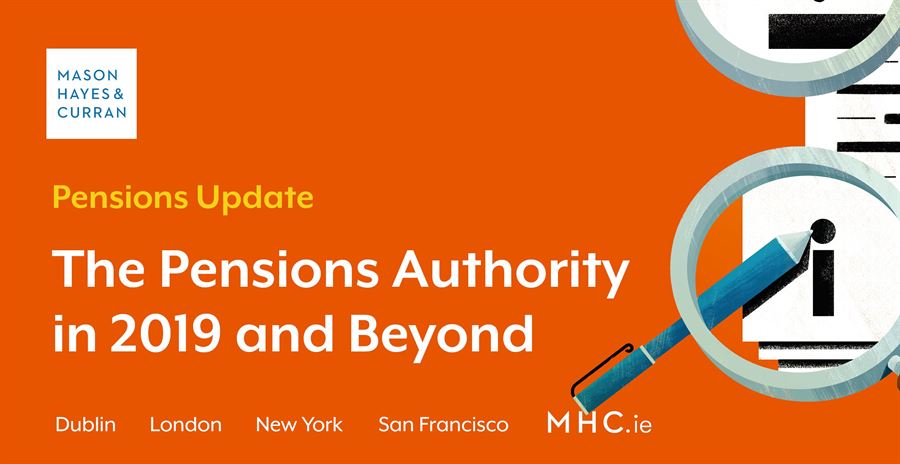 The Pension Authority’s (Authority) annual report (Report) confirms that, to ensure that the Authority is directing the resources of its regulatory practices efficiently, it has adopted a “hierarchy of risk priorities”. The priorities rank in the following order:

The Report confirms that the Authority completed nine prosecutions in 2019. It notes that non-compliance is treated very seriously by the Authority especially in instances where it suspects that scheme assets or contributions are at risk, or where a response is not received from employers or trustees where a statutory request is made by the Authority.

In 2019, the Authority commenced 55 new investigations of alleged breaches of the Pensions Act 1990. The alleged breaches ranged from issues surrounding the non-remittance of pension contributions to failures to reply to statutory requests for information. During 2019 63 investigations were closed by the Authority and 17 reports of non-compliance were advanced to prosecution or sanction.

The Authority conducted 159 desk-based audits on regulated entities in 2019. The audits focussed on the following:

The Authority’s aim in conducting audits is to ensure that the regulated entity is compliant; in some instances the Authority may consider an enforcement action.

The Authority issued just one determination under section 64 of the Act. S64 provides that where there are no trustees of a scheme or a trustee cannot be found, the Authority may appoint a new trustee or trustees in substitution for any existing trustee(s).

The Statement from the Pensions Regulator

Much of the Statement From the Pensions Regulator (Statement) concerns the imminent transposition of the IORP II Pensions Directive (Directive). However, the Regulator also provides an update on the Authority’s staffing needs, given the anticipated requirements of the Directive and once again mentions the need to reduce the overall number of pension schemes operating in Ireland.

A lack of focus on investments

In the Statement, the Regulator notes that a challenge remains for trustees and their advisors in ensuring that member outcomes are met. He states that investment decisions have often led to poor value for money and a lack of risk management. He also mentions poor quality member communications as an issue.

The Authority’s staffing needs and fees

The Regulator confirms that the Authority has received approval to increase its staff by 17. He notes that these additional members of staff will be required to meet the “forward looking risk-based supervision” of pension schemes as required by the Directive. He adds that the Authority will have a greater level of capital expenditure in both meeting the requirements of the Directive and meeting its obligations to collect and provide data to the European Insurance and Occupational Pensions Authority. The Regulator notes that the necessary increases in staffing and expenditure will increase the running costs of the Authority and that a submission regarding an increase in the Authority’s annual fee has been made to the Minister for Employment Affairs and Social Protection

The impact of the pandemic

The Regulator notes that while there has been a significant financial market recovery since the dramatic falls in March of 2020, “the first six months of 2020 clearly demonstrate the vulnerability of many Irish pension schemes to investment risk”. He adds that long-term pension provision requires an element of risk, but many DB and defined contribution schemes hold excess levels of risk and are not managing or measuring investment risk in a structured manner.

The transposition of the Directive

The Regulator notes that transposition of the Directive is expected to occur before the end of 2020. In noting that the purpose of the Directive is to improve outcomes for members, the Regulator adds that there are “too many schemes that are not run to the standard that members are entitled to expect”. The Regulator points out that luck should not be a factor for members when it comes to how well their pension schemes are run and that there is no justification for a lower standard of care applying to retirement savings as opposed to any other type of savings.

In discussing the changes that the Directive will bring about, the Regulator states that trustees will need to “satisfy themselves and the Authority” that they have the expertise, commitment and professional support to meet their obligations to members. The Regulator adds that “any trustee whose sole or primary focus is on compliance will not be doing enough”

The number of schemes in Ireland

The Regulator refers to the abnormally large number of pension schemes in Ireland. He notes that this historical issue is due to the fact that setting up a pension scheme in the past was comparatively easy with “no barriers or costs to setting up a scheme”.

The Regulator adds that the Authority is of the view that large schemes are better able to protect the interests of members and that multi-employer schemes and PRSAs are practical alternatives to defined contribution schemes. The Regulator notes that large schemes “provide the possibility of efficiencies of scale and allow the Authority to supervise more efficiently and safeguard the interests of pension savers”.

The Directive and defined benefit schemes

The Regulator also notes that the Directive will place an increased burden on the trustees of DB schemes. Trustees will be need to prepare and be familiar with a greater range of financial and actuarial data and show that schemes are being managed to ensure that “members have a reasonable chance of receiving the benefits set out in the scheme rules.” The Regulator expects that these new obligations will improve prospects for DB scheme members in making it more likely that they will receive their benefits and ensuring that “unachievable promises are identified in good time”.

While the Authority’s Annual Report and the Regulator’s Statement provide a range of new considerations for trustees and employers, the main theme and take away point for the rest of 2020 and beyond is the transposition of the Directive into Irish law. Trustee boards should be well underway in ensuring that written policies are in place in respect of risk management, scheme administration, outsourcing activities, data privacy and remuneration. Trustee training should be arranged and completed and the trustee board should be in a position to confirm that all member personal data is stored securely.

It is clear that from the staffing strategy, outlined in the Regulator’s Statement, that the Authority aims to be fully engaged in overseeing scheme adherence to the obligations set out in the Directive. Where legal advice is deemed necessary it should be sought without delay.