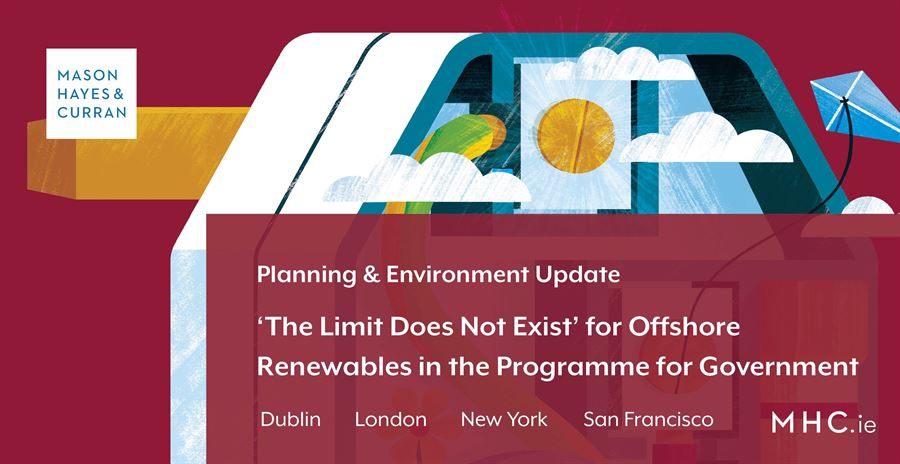 The Irish government’s Climate Action Plan 2019 (CAP) targets 70% of electricity to be generated from renewable sources by 2030. The CAP suggested that 3.5 GW of electricity generated from renewable sources would be produced from offshore renewable energy. The incoming Government have indicated that this target will be increased to 5GW. It has also reconfirmed that the first RESS auction for offshore renewables would take place next year.

The Marine Planning and Development Bill

The PfG has pledged to give priority to the drafting of the Marine Planning and Development Bill. A final General Scheme of the proposed Bill was approved by the outgoing Government in December 2019, which envisages a three step consent process to secure permission to develop a maritime area. It has also committed to enacting the Bill within nine months of its publication. This means that the General Scheme will have to be scrutinised, passed through both Houses of Government and enacted by the President in a relatively expedient manner.

The National Maritime Planning Framework, currently under consultation, obligated under Article 4 of EU Directive 2014/89/EU is required to be finalised by March 2021. The PfG proposes that this new framework, once enacted will work in tandem with the National Planning Framework for land to deliver Project Ireland Marine 2040 to set out and implement long term strategies to manage and efficiently use Ireland’s vast maritime resources.

The incoming Government also appear ambitious to explore the offshore renewable potential along the West Coast. Up until now, the West Coast has been side-stepped as a primary focus area for offshore renewable exploration due to challenging water depths and feasibility issues. The PfG has committed to release a long term plan to generate at least 30GW of renewable electricity from the Atlantic shores. This would be the equivalent of the ability to power around 30 million homes.

So the time for the Irish offshore sector seems to be imminent. The enactment of the long awaited Marine Planning and Development Bill will be a major boost for the industry as it aims to streamline the maritime planning process and avoid conflicts between competing interests. The PfG also appears to be focused on the longer term aspects of marine spatial planning. These initiatives clearly resonate with the EU’s commitment to become carbon neutral by 2050, announced under the European Green Deal. If Ireland can efficiently and sustainably harness its marine resources, it will not only go a long way to reaching the CAP targets, it will also greatly assist to align Ireland with the EU’s ambition to decarbonise the energy sector.