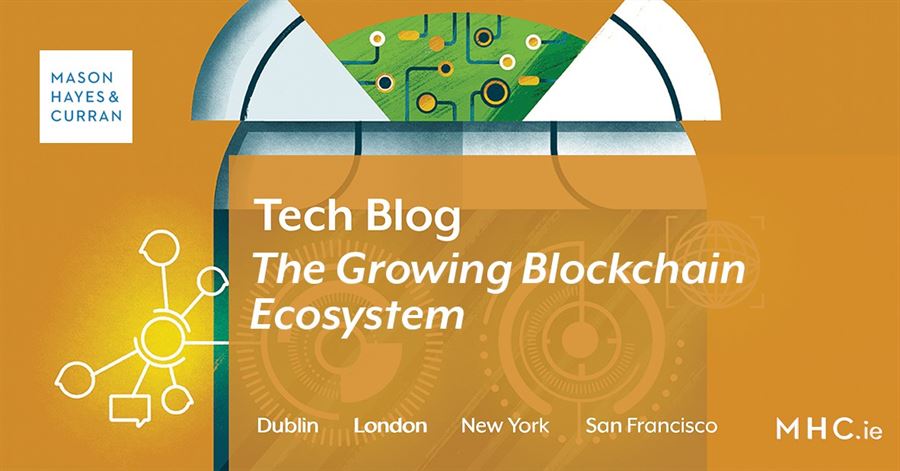 Following a recent talk by Minister for Finance, Paschal Donohoe TD, on The Growing Blockchain Ecosystem and the Role of Government at Blockchain Ireland Week, we take a closer look at the Irish Government’s approach to blockchain technology and the views of regulators in Ireland and Europe.

A refresher on blockchain

Blockchain is at the cutting-edge of technology and online services. It is essentially a database that allows parties to collaborate and share information without the need to trust the other parties because transactions can be recorded in a verifiable, secure and immutable way. Blockchain can be applied to a variety of digital applications such as financial services, supply chain management, government services, and regulatory reporting. Our previous blog post examines in more detail what blockchain technology is and how it works.

In May 2019, the first ever Blockchain Ireland Week took place in venues across the country. Its mission was to help spread knowledge and grow the blockchain ecosystem in Ireland.

In his speech at the event, Minister Donohue provided an update on what the Irish Government is doing in the blockchain sector. The Minister reiterated the Government’s support for new technologies like blockchain, and its commitment to foster innovation and adapt to change. He also confirmed the Government was working with a variety of stakeholders here in order to better understand how the technology works and assess how the use cases for blockchain can be put into practice.

The Minister reflected on a number of initiatives that he heralded as tangible results of the Department’s Working Group on Virtual Assets and Blockchain, which has been monitoring technical and regulatory developments in the sector at an EU and global level over the last 15 months.

Governments across the EU are taking an interest in how they can leverage blockchain. Like Ireland, France recently hosted a Blockchain week in Paris that was attended by France’s Minister of Economy and Finance. The French Government has pledged to invest €4.5 billion in new innovations like blockchain in the coming years.

Some EU countries are actually employing blockchain technology in practice. For instance, Austria uses blockchain technology to auction governmental bonds worth billions of euro; Switzerland has implemented a form of blockchain electronic voting; Sweden uses it to notarise real estate transactions; and the French agricultural industry has adapted blockchain to improve its existing supply chains and guarantee the origins of food.

While many of the use cases for blockchain are largely in a ‘proof of concept’ stage, EU stakeholders are trying to harmonise the development of the technology and the standards that should apply to it. Ireland is a member of the European Blockchain Partnership. Formed in 2018, the EBP identifies cross-border digital public sector services that could be deployed through a common European Blockchain Services Infrastructure, with a shared governance model.

Last year, the European Parliament adopted a non-legislative resolution on distributed ledger technology (DLT) and blockchain. The resolution emphasises the importance of taking a global approach to standards setting so that innovative companies are not swamped with regulation and decide to move their headquarters outside the EU.

In March, the EU Blockchain Observatory and Forum (BOF) published its Report on Scalability, Interoperability and Sustainability of Blockchain. The report addresses the lack of appropriate legal and regulatory frameworks as well as the on-going need for suitable technical hardware and software to foster innovation.

As data protection and security play such an important role in blockchain, the Irish Data Protection Commission (DPC) has noted that it continues to carefully monitor developments in the technology sector, including blockchain.

Given the complexity of applying blockchain technology in privacy-friendly ways, it is no surprise that the Irish and other European data protection authorities have so far been cautious about expressing their opinion on blockchain and related technologies. Late last year, however, France’s data protection commission, CNIL, published a paper describing the tension between data protection and blockchain, along with solutions to promote the responsible use of blockchain in the context of personal data.

We are likely to see further developments in this key area in 2019, as the European Data Protection Board is considering blockchain as one of the topics it may cover in its 2019/2020 work program.

Where do we stand?

It’s unclear what the future holds. Ireland has traditionally been able to attract some of the world’s most innovative technology and financial services companies to these shores. As Minister Donohoe’s speech noted, there has been a degree of progress in the blockchain sector in Ireland over the last two years. However, there is still a lot of work to do to catch up with our EU neighbours. To fully capitalise on the opportunities that blockchain offers, all blockchain stakeholders in Ireland; government, private and public sector companies, academia and others, need to study what other countries are doing, and urgently collaborate with each other on practical steps forward.