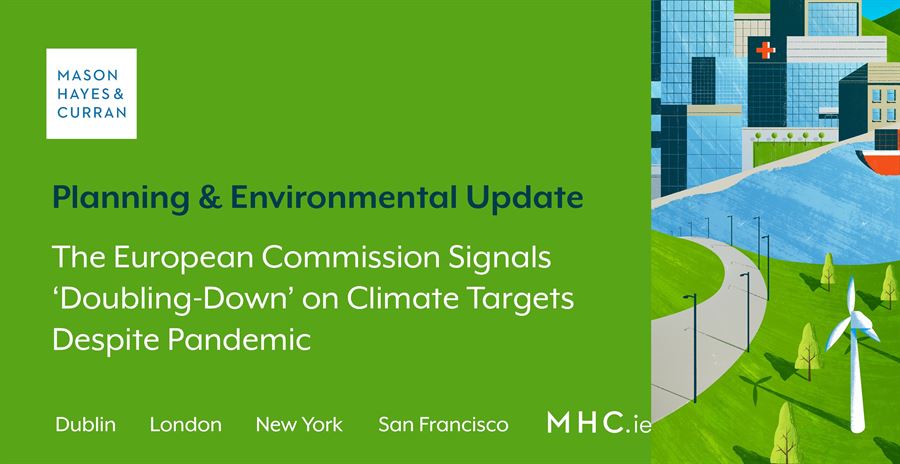 The need to transform the European economy and society to deal with the climate change emergency was a defining theme of European Commission President, Ursula von der Leyen’s inaugural ‘State of the Union’ address delivered on 16 September 2020. She linked the threat of the global pandemic to that of climate change, demonstrating how “A virus a thousand times smaller than a grain of sand exposed how delicate life can be. It laid bare the strains on our health systems and the limits of a model that values wealth above wellbeing. It brought into sharper focus the planetary fragility that we see every day through melting glaciers, burning forests and now through global pandemics.”

The speech set out a vision for increased harmony between the development of the European and international economy on the one hand, and individual and planetary well-being on the otherhand. In doing so it articulated the core conception of this Commission’s flagship European Green Deal policy. This includes the ambition to make Europe the first carbon neutral continent by 2050, and a beacon internationally for how institutions can repair our damaged relationship with the natural world.

In that regard, the announcement was made to increase the 2030 target for emission reductions from 40% to at least 55% compared to 1990 levels. In order to facilitate this, 30% of the €750 billion post-coronavirus “Next Generation EU” recovery package, is to be ring-fenced for climate-friendly projects. This will represent, if implemented, a very significant financial intervention helping to drive investments into new green technologies and supporting Member State programmes to reduce emissions. Such financial measures it is hoped will encourage investors to abandon fossil-fuel backed assets, and thus drive down the value and investment-potential of such assets.

It was also proposed that there will be a revision of climate and energy legislation to make it “fit for 55”. This will entail legislative amendments to be published by June 2021 of the following pieces of EU legislation:

The Commission has also indicated an intention to adopt the increased target of 55% as the EU's Nationally Determined Contribution (NDC) under the Paris Agreement by the end of 2020. As well as the target being given legislative force in the EU through the proposed EU Climate Law, it will oblige all EU institutions across all areas of competence, and the Member States, to work collectively to achieve the target of 55%.

This legally binding emissions reduction target at EU level, will have to be reflected in Irish climate change legislation and policy. Minister Ryan has responded to the EU proposals by stating that the increased ambition will be reflected in a soon to be published Climate Action (Amendment) Bill. This will strengthen the governance arrangements for addressing the climate challenge contained in the Climate Action and Low Carbon Development Act 2015. In that context it is worth recalling that any government policy in relation to climate action must now have regard to the possibility of legal challenge in the event that stated ambition does not translate into concrete actions. This is following the recent landmark Supreme Court judgment in the Climate Case Ireland which struck down the previous National Mitigation Plan adopted under the 2015 Act.

The unanimous ruling by seven Supreme Court judges made it clear that the National Mitigation Plan did not contain the specificity required to explain how it intended to meet its obligation to cut emissions by 80% by 2050 compared to 1990 levels, and consequently quashed the Plan. The implications of this decision for climate action are profound, given that the Courts have confirmed their ability to review the mitigation plans which will flow from the amended Climate Action Act.

Thus enacting, and actually implementing, laws that are “fit for 55” will now require legislators and policy makers to adopt measures which will have real impact on sectors, and thereby the community at large. The next number of months will determine how these legal requirements impact on the various domestic economic sectors, many of which are reeling from the consequences of the coronavirus pandemic and as the wider economy remains in economic shock.

Emissions from agriculture, transport, the built environment, and small industry are currently addressed in the non-ETS sector. Ireland’s current non-ETS targets are to achieve a 30% reduction in non-ETS sector emissions by 2030, relative to 2005 levels. In Ireland, agriculture, transport and buildings represent the largest contributor to non-ETS emissions with agriculture representing 46% of the non-ETS emissions, compared with 17% in the rest of the EU.

However, the EU Commission has signalled the potential expansion of the ETS to include road transport and buildings, which would take these out of the non-ETS sector, and require a rebalancing of the Effort Sharing Regulation which governs national reduction targets for the non-ETS sector. Significantly the Commission have signalled that they will allow emission ‘removals’ associated with agriculture and forestry to be accounted towards the 55% target to be assessed in line with the LULUCF Regulation. The calculation and accounting of such removals is certain to be a contentious exercise and one which will greatly affect Ireland’s large agriculture and food sector.

Ms von der Leyen has also placed considerable emphasis on green hydrogen as part of the EU’s Hydrogen Strategy, and particularly on research and development in relation to this emerging technology. The Strategy seeks to develop an investment agenda with a pipeline of viable projects and further develop clean hydrogen supply chains and downstream technologies. Hydrogen is clearly seen as an important tool in transitioning the EU’s heavy industry away from coal and other fossil fuels.

The Commission also indicated that a transformation of the construction sector is required to make our buildings “less wasteful, less expensive and more sustainable”. There is a clear emphasis in the Commission proposals on economic recovery and job creation from investments and new technologies in the construction of new , and the renovation of existing buildings.

Prior to the onset of COVID-19, the new European Commission which took its mandate following the May 2019 European Parliament elections signalled that its key policy priority was to achieve a European Green Deal. It is hoped this deal would transform the nature of the economy and address the ecological implications of unregulated economic growth and consumption of resources. Despite the unprecedented nature of the global pandemic, Commission President Ursula von der Leyen has reaffirmed the EU’s determination to create a more resilient economy which can withstand the threats from biological and environmental sources. The Commission have indicated that instead of easing off on climate emissions targets in view of the pandemic, the EU would in effect ‘double-down’ on its ambition to achieve transformational change from the existing fossil-fuel dependent economic model.

Over the next number of months the revised legislative instruments at EU level, and the revision to the government’s National Energy & Climate Plan promised in the Programme for Government will be published. This will set out a target to achieve a 7% annual reduction in greenhouse gas emissions between 2021 and 2030. The actions which will be required will have a profound impact on key aspects of the economy, at a time when unemployment is rising sharply and entire sectors of the economy are in serious difficulty. Within that context, the requirement to ensure that measures to be taken to address the climate challenge are equitable across all sectors and groups in society will be critical to ensuring that they can command the necessary public acceptance.

For more information, contact a member of our Planning & Environmental team.