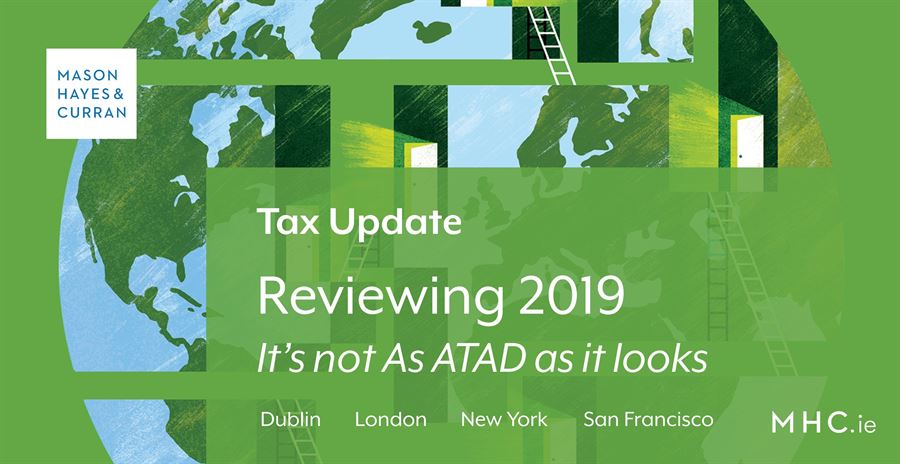 The evolution of the international tax landscape continued in 2019. Tax changes driven at an EU and OECD level have all impacted on Ireland and the attractiveness of its tax regime. The changes have brought both opportunities and challenges for Ireland as it adapts to the changing environment, while seeking to maintain its position as a competitive regime for international business. Highlights from the year on the international tax front include:

New rules are being introduced to give effect to the anti-hybrid rules contained in the EU Anti-Tax Avoidance Directive. These rules are intended to counter tax avoidance strategies where one jurisdiction sees an instrument or entity different to the way another jurisdiction see it such that it results in a tax advantage. For example, where a group gets a double deduction for an expense or where a group gets a deduction for an expense but the corresponding amount is not taxed anywhere. Taxpayers will need to carefully consider the impact of these anti-hybrid rules on their groups.

Significant changes are due to be introduced to Ireland’s transfer pricing regime. These changes had been signalled in the Transfer Pricing Feedback Statement issued last August. The key change is the application of the 2017 OECD Transfer Pricing Guidelines, superseding the previous 2010 version, which amongst other provisions updates the definition of the “arm’s length principle” and increases the focus on substance in intercompany transactions.

Ireland has transposed the EU Directive on the mandatory disclosure of certain cross-border arrangements (DAC6) into the Irish tax code. While the reporting of transactions within 30 days generally applies from 1 July 2020, under transitional rules the Directive will apply also to reportable cross-border arrangements the first step of which was implemented after 25 June 2018.

The Directive is primarily aimed at requiring intermediaries and taxpayers to make returns to Revenue regarding certain types of cross-border arrangements with ‘hallmarks’ of aggressive tax planning. However, the reporting is not simply a cross-border extension of Ireland’s existing disclosure rules but also extends the type of transactions reportable beyond tax planning to certain transfer pricing arrangements and structures involving specified jurisdictions that may pose money laundering concerns.

Ireland’s tax regime remains internationally competitive and Ireland continues to be attractive as a country in which to do business despite the changing landscape. Ireland witnessed fundamental changes to its corporate tax system in 2019 through the introduction of new legislation required under EU law. Further change is expected in 2020 and work will continue on the implementation of ATAD. The Irish Department of Finance is taking the approach of consulting and engaging with stakeholders in advance of implementing the significant changes which are on the horizon and this is welcomed.

For more information on tax issues which may impact your business in 2020, contact a member of our Tax team.