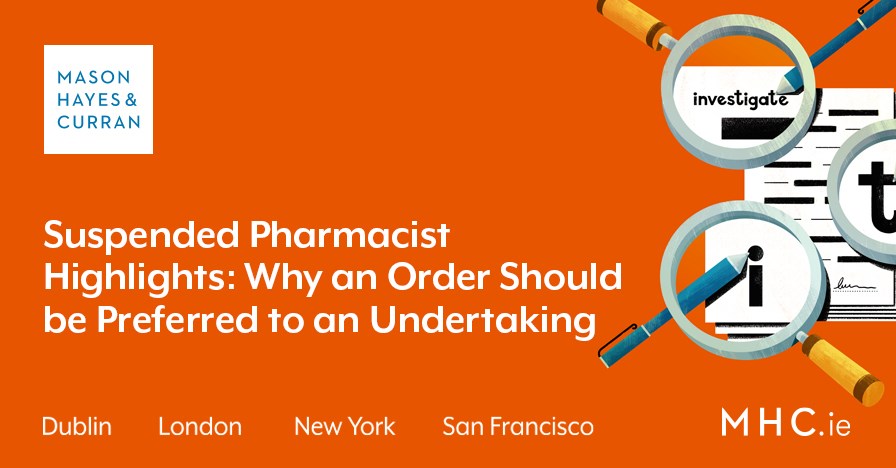 The statutory power to suspend from practise

Professional regulators, such as the Pharmaceutical Society of Ireland (PSI), usually have a statutory power which gives them the authority to make an application to the High Court for an interim suspension of a registrant.

In 2004, the Supreme Court in Medical Council v PAO described the effect of an application, as ‘a “holding position” pending a final decision on the fitness to practise of the [registrant]’.

Legislative framework and the role of the High Court

The Pharmacy Act 2007 (“Act”) provides for the suspension of the registration of a registered pharmacist against whom concerns to public protection have been made. The application is to be made by the Council of the PSI.

The Act provides that an interim suspension order may be made only if the High Court considers that there is a risk to the health and safety of the public which is of such magnitude that the pharmacist’s registration should be suspended pending further procedure under the Act.

The Council of the PSI decided to apply to the High Court for an order suspending the pharmacist from the register.

The reasons for taking that approach included:

The reliefs sought by the Council of the PSI included an order suspending the registration of the pharmacist and prohibiting the pharmacist from engaging in the practise of pharmacy pending further procedure under the Act.

The High Court had to consider the issue of risk and whether sufficient risk to the public existed, given that the pharmacist had taken certain steps to remove himself from practise.

The High Court outlined that questions might arise in other cases such as hardship to the practitioner, the draconian nature of suspension and the need to avoid unduly lengthy suspensions. However, the High Court considered that these questions were not as critical in this case as the pharmacist clearly stated that he was not going to practise.

The Court considered whether informal options were available if a regulator was prepared to accept undertakings by a practitioner either to restrict practise or not to practise. However, the Court noted that, in the pharmacy context, there is no statutory basis for this. Mr Justice Humphreys also considered a point made by President Kelly in a previous case that the meaningfulness of informal undertakings is diluted by their lack of enforceability.

He also noted that the 2007 Act did not permit the subject of a complaint to cancel their registration, or for the registrant to request suspension without recourse to the Court.

The pharmacist argued that “risk” means risk construed holistically in all the circumstances of the case; therefore, if an undertaking was provided, there was not sufficient risk and an order would not be required.

However, the Court viewed the Act as implying that the risk should exist independently before the application for a suspension. Using this logic, an undertaking does not “kill off” the process, and the regulator or Court, having identified a risk, can then assess the most appropriate response to mitigate that risk.

The pharmacist argued that an undertaking should be preferred to an order. It was submitted that the pharmacist should not be subjected to a draconian order if another method was available. Mr Justice Humphreys rejected this, stating that the “order isn’t in fact draconian if the practitioner isn’t going to be practising anyway”. The Court said that the pharmacist’s good name and reputation would be affected by the imposition of either an undertaking or order.

Mr Justice Humphreys outlined that the enforceability of an undertaking was less convenient and only the suspension carried with it a specific statutory offence for non-compliance. Mr Justice Humphreys was ultimately satisfied that a risk to the public did exist and this risk warranted the pharmacist’s suspension. An order suspending the registration of the pharmacist was made.

This was an interesting exploration by the High Court of the statutory framework underpinning the suspension of registration of a pharmacist.

Mr Justice Humphreys drew attention to possible inflexibilities in the legislation. He highlighted potential improvements such as allowing a practitioner to agree voluntarily to a measure, which would have equivalent legal effect to a suspension, but without the need to go to the Court.

At the time of his judgment, Mr Justice Humphreys noted that the Oireachtas was considering this area in the Regulated Professions (Health and Social Care) (Amendment) Bill 2019 and he took this opportunity to draw attention to certain issues which arose in this case which could be considered in future legislation, as they could potentially be applied to other disciplines depending on the legislative scheme.

When faced with a decision as to whether an undertaking is sufficient to protect the public, professional regulators should be aware of Mr Justice Humphreys’ forensic consideration of this issue and the Court’s view surrounding enforceability.