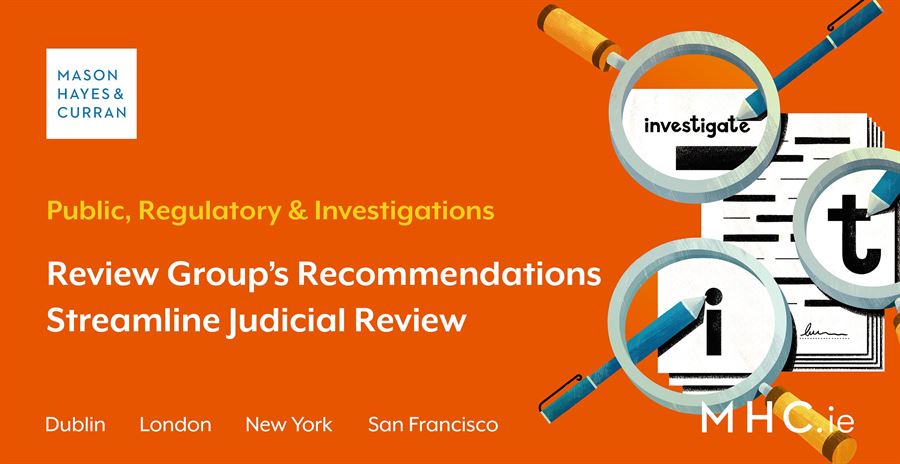 The much-anticipated report of the Government’s Review Group, entitled the “Review of the Administration of Civil Justice”, was published by Minister for Justice, Helen McEntee, in December 2020. Chaired by former High Court President, Mr Justice Peter Kelly, the Group’s review commenced in March 2017. Its remit was to examine the current administration of civil justice in the State with a view, amongst other things, to:

We look at the Group’s particular recommendations for the reform of procedure in the area of judicial review. The most significant of these relate to:

Conscious of the ‘reports-gather-dust-on-shelves’ phenomenon, the Group has made straightforward recommendations with a view to easy implementation. The Review Group considered and made recommendations on the following issues:

The requirement for leave to apply for judicial review

The Review Group recommended that applicants for judicial review should continue to have to seek the permission of the High Court before they can commence proceedings.

This is a significant recommendation given the view expressed to the Group by the current President of the High Court, Ms Justice Irvine, that:

“the reality is that the leave requirement adds little or nothing to modern judicial review practice, save perhaps that it represents a burden on the judicial system and adds to costs”.

However, in order to increase the effectiveness of the leave requirement, which is intended as a ‘filtration process’ to weed out unmeritorious cases, the Review Group recommended that the threshold for granting leave should be increased.

The threshold for granting leave

The Review Group has recommended that the current “arguable case” requirement to obtain leave be replaced by a requirement to demonstrate not only substantial grounds but also that the claim has a reasonable prospect of success.

It is not clear that this would necessarily lead to a more effective filtration of judicial review cases. Ms Justice Mary Irvine has, for example, commented that the existing threshold of “substantial grounds” in planning judicial review cases has not operated to weed out the commencement of weak cases. However, it may be that adding the further express requirement of having to demonstrate a reasonable prospect of success may achieve better results than a “substantial grounds” criterion operating on its own. Indeed, the Group has asked that consideration also be given to incorporating the proposed ‘reasonable-chance-of-success’ criterion into statutory judicial review remedies generally.

The Group recommended that statute preclude a person from seeking judicial review in cases involving certain factors. These factors include, for example: clerical or typographical errors, unintentional slips or omissions, or text or omissions of text in a determination or order, or in material relied on in making a determination or order, unless s/he had previously applied to the body concerned for a rectification, and had wrongly been refused.

In cases where judicial review was in train in the High Court, the Group recommended that the Court be given the power to require the applicant to apply for a rectification where it was satisfied that would be an adequate alternative to granting judicial review. As a complementary matter, the Group recommended that the primary legislation underpinning adjudicative or decision-making regimes in the administrative law field should expressly confer a general jurisdiction on the decision-makers and tribunals concerned to re-open decisions to correct errors of the type referenced. This would overcome the obstacle that a decision maker might feel unable to re-open and rectify a matter once decided on, on the basis that the existing law might consider the decision-maker to be functus officio and not to have the power to do so.

Measures to address delay and inefficiency

The Group placed a particular focus on delay and inefficiency in the course of the judicial review process.

Amongst its recommendations, it suggested that the requirement to have actually made an application for leave for judicial review within three months of the cause of action accruing be amended to a requirement that the motion papers for the application be filed within that period, fostering less of a ‘rush’ to make, and hear and determine, the application within the three-month time-limit.

In terms of preparation for the substantive hearing, the Group recommended a tightening of post-leave procedures to ensure a speedy trial. These procedures include greater use of:

After the initial return date, the Review Group recommended that there be greater prescription in the setting of directions, with a six-week adjournment being granted for the lodgement and delivery of opposition papers with a possible further adjournment of two weeks. The Review Group also directed that if, after two weeks, opposition papers have not been filed, the case should be remitted to the Judge’s List for further measures, as appropriate. Once pleadings are closed, the case should be given the next available date for hearing. Submissions would then require to be delivered within two weeks of pleadings closing by the applicant, and then within a further two weeks by the respondent.

In order to overcome the current practice of populating the pleadings with unwieldy facts and grounds, and then of verifying these by way of formulaic affidavit, the Review Group recommended that the Court Rules be amended. The amended Rules would provide that there be a specific heading for facts in the statement required to ground the application for judicial review, and that these facts should then be set out in the grounding affidavit in a narrative manner.

Similarly, in the opposition papers, the Review Group recommended a change in the Rules such that, where no specific new facts or matters were being alleged by the respondent, a general traverse or denial of the claims should be acceptable. In turn, the statement of opposition should only address any material facts or issues disputed, and incorporate any matters positively relied on, such as time, discretion, or alternative remedies. The Group recommends that an affidavit verifying a statement of opposition should only be necessary if there is a distinct plea as to a new fact that is not otherwise in evidence.

The Review Group has also recommended that it be open to both the applicant and the respondent to seek to apply for a “leapfrog” appeal to the Supreme Court, bypassing the Court of Appeal - as opposed to the current position where this procedure is available to the applicant only.

The recommendations of the Group are practical ones that could be implemented relatively easily, with minimal legislative change, resources or cost. Overall, it is anticipated that these would result in a pronounced streamlining of the judicial review process. Genuinely-affected parties could bring only substantially-grounded claims standing a reasonable chance of success. Cases would not come to court, or applicants would be sent back by the court, if the matter involved a ‘technical’ error which could be reopened and rectified by the decision-making body. Pleadings would be more concise, and court procedures would ensure better progression of matters to a hearing, resulting in cases being determined more quickly. There is also some prospect for cost-saving; however, it is unclear to what degree the recommendations will result in a major saving of costs.

If you would like to discuss the impact of the Review Group's recommendations, contact a member of our Public, Regulatory & Investigations or Dispute Resolution teams.