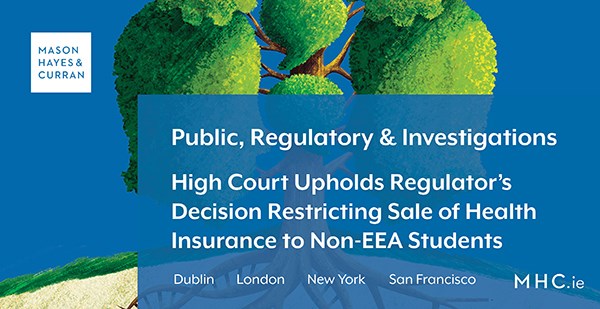 Under the Health Insurance Acts, providers of “health insurance contracts” must register with the HIA and comply with the four principles of private health insurance. These are:

There is an exception to the definition of “health insurance contracts” where insurance is provided to persons, and their dependents, who are not “ordinarily resident in the State”. Chubb argued that its policy fell within this exception as the non-EEA students attending academic courses in Ireland were not, in its view, “ordinarily resident” in this country. Chubb therefore provided, and renewed, the 12 month policies for non-EEA students for the duration of their stay in Ireland. In some cases, the period of such a stay could be up to seven years.

The HIA, on the other hand, formed the view that students living in Ireland for more than one academic year were “ordinarily resident” in the State. It therefore requested that Chubb restrict the sale of its policy to students attending courses of one academic year’s duration or less. While Chubb offered to limit the sale of the policy to students attending a course of study of no longer than three years, the HIA was not satisfied with this and served an Enforcement Notice directing Chubb to:

In response, Chubb issued judicial review proceedings and a statutory application challenging the Enforcement Notice and the HIA’s interpretation of the phrase “ordinarily resident in the State”.

Chubb argued, among other matters, that the HIA was not entitled to define the term “ordinarily resident in the State” in a general way and instead must determine the meaning on a case by case basis. In addition, Chubb contested the interpretation of the HIA as determined in its case. Chubb also argued, in its judicial review proceedings, that the HIA had breached Article 15.2.1 of the Constitution by engaging in a legislative function through determining/imposing its view of the meaning of the phrase.

In October 2018, Ms Justice Burns delivered judgment in favour of the HIA. The judge rejected the arguments made by Chubb and upheld the Enforcement Notice and the HIA’s interpretation of the phrase “ordinarily resident in the State”. The judge found that the HIA had full authority to determine the phrase, which was “entirely within [the HIA’s] remit in regulating the health insurance market”. The judge gave detailed consideration to the case law presented by both parties in support of their interpretations. In considering the natural and ordinary meaning of the words “ordinarily resident in the State”, in the context of the general aims and objectives of the Health Insurance Acts and taking into account the amendment history of the legislation, the judge held that students attending a course of study of more than one academic year are “ordinarily resident” here. The judge also rejected the argument that the HIA had breached Article 15.2.1, holding that “[the HIA] has not purported to legislate in the matter” but rather had “set out the factual circumstances which will give rise to a non-EEA student being considered by it to be ordinarily resident in the State”.

Impact of the Judgment

This judgment reflects a positive regulatory development for our client and consumers. Registration of insurers with the HIA and compliance with the Health Insurance Acts forms part of the community rating system of health insurance in Ireland, which ensures that all consumers pay the same premium for the same health cover regardless of their age, gender, health or past record of claims. In the view of the HIA, ultimately, this scheme tries to promote a fairer – or more equal - health system for consumers.

Chubb was recently granted leave to appeal the judgment to the Court of Appeal.