Pharmacists Beware! A New Code of Conduct Is Now In Effect 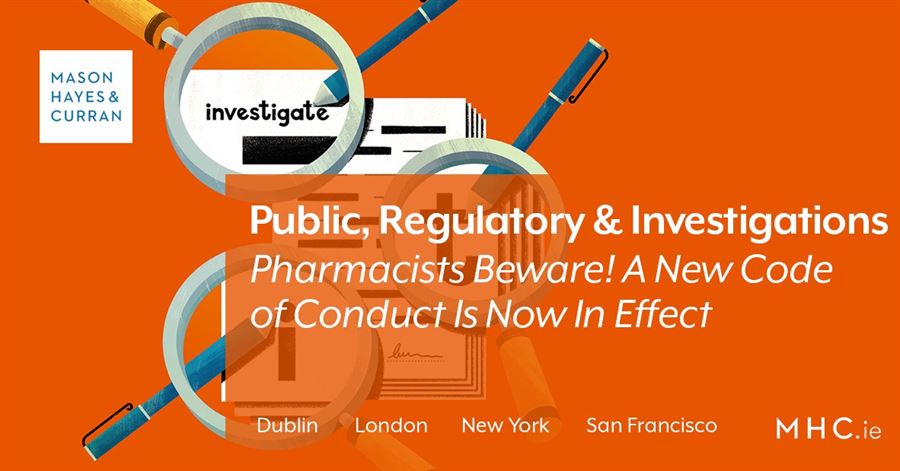 Following a public consultation, the Pharmaceutical Society of Ireland (PSI) launched its new Code of Conduct: Professional Principles, Standards and Ethics for Pharmacists (new Code) in September. The PSI is the pharmacy regulator and is a public body established in law to protect the health, safety and wellbeing of patients and the public by regulating pharmacists and pharmacies in Ireland.

To achieve this aim, the PSI sets the standard for pharmacists’ education and training in Ireland and creates the standards and supports to promote good professional practice in pharmacy. The PSI is also responsible for maintaining the register of pharmacists, pharmaceutical assistants and pharmacies, carrying out inspections of pharmacies, and taking action when there is a concern about a pharmacist or a pharmacy, including when a complaint is received from a member of the public.

The governing legislation is the Pharmacy Act 2007 (Act) and this requires and enables pharmacists to practise in their profession in a regulated, controlled and safe environment in a way that is focussed on the safety and interests of their patients.

Section 7(2)(a)(iii) of the Act creates the statutory basis for the implementation of a code of conduct and places the duty on the PSI to draw up a code of conduct for pharmacists. The first Code of Conduct for Pharmacists came into effect in 2009. This Code had been under review since 2017, to ensure that it continued to reflect the current environment, the evolving role of pharmacists and a changing health service.

The new Code applies to all pharmacists: they are personally accountable for their actions and must be in a position to justify any decision made.

The new Code is clearly patient-orientated and acknowledges the changes that have taken place since 2009 in:

The new Code is intended to support pharmacists and sets out the following seven statutory principles with which pharmacists are obliged to comply:

Every code of conduct can be described as a significant document and the new Code is no exception. Any act, omission or pattern of conduct by a pharmacist that is a breach of the new Code may fall within the definition of professional misconduct as set out in section 33 of the Act and may result in a complaint being referred to the Professional Conduct Committee of the PSI for a public inquiry. If a pharmacist is found to be guilty of professional misconduct, they can then be sanctioned under Part 6 of the Act.

The likely effect of the new Code is that the conduct of a pharmacist will remain open to both professional and public scrutiny, susceptible to complaint, subject to regulatory inquiry and may result in the imposition of a disciplinary sanction(s).