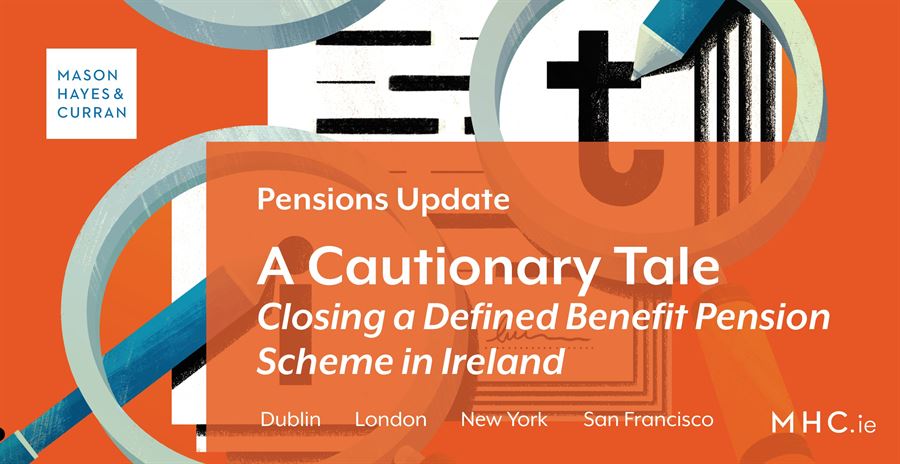 In a 2018 Pensions Update we outlined Pfizer’s efforts to close its Defined Benefit (DB) scheme and set out some of the difficulties faced by employers in maintaining these schemes. In general, the risk relating to the adequacy of the funding of these schemes falls squarely on the shoulders of the employer. For a number of reasons employers are facing significant challenges in funding the liabilities of DB schemes. To address this issue with its DB scheme, Pfizer sought to move its plant employees in Ringaskiddy and Little Island to a new Defined Contribution (DC) scheme and to close its DB scheme to the future accrual of benefits. In a DC scheme the risk, in terms of the adequacy of the fund at retirement, rests with the employee.

The WRC proposal and the union rejection

In June 2019 the Workplace Relations Commission (WRC) brokered new proposals to allow for the closure of the Pfizer DB scheme. The 2019 WRC proposals offered a significant enhancement on the Labour Court’s (the Court) recommendations from a year earlier. Both Ringaskiddy unions, SIPTU and Connect, had rejected the Court’s 2018 recommendations and issued a strike notice in response to Pfizer’s plan to implement the recommendations without agreement. However, both parties agreed to wait for the outcome of the WRC discussions.

It was noted by the WRC that this set of proposals represented the “absolute limit” achievable which was well in excess of the c. €31.5 million costs that may have been borne by Pfizer had the Court’s 2018 recommendations been implemented.

However, given that the 2019 WRC proposals have been rejected by the Ringaskiddy unions, Pfizer will not now seek to implement changes to the Pfizer DB scheme and the WRC has removed its proposals. While the proposals have been shelved in respect of the Ringaskiddy plant, it is possible that separate pension talks may be held in respect of the Little Island plant due its anticipated spin-off later this year. In a statement, Pfizer has noted its extreme disappointment that the members of the Pfizer DB scheme employed at the Ringaskiddy plant rejected the new proposals.

The outcome of this process is indicative of the issues that many employers will face where they are looking to close a DB scheme. For Pfizer, even if the 2019 WRC proposals had been accepted by workers in both plants, the costs of implementing them would have been substantial. The alternative, of course, is to force through the closure of a DB scheme and in those cases industrial action and the associated costs that it brings are almost inevitable. Consideration also needs to be given to the role played by the pension scheme trustees and whether or not their consent is required to close a scheme. Given that there are still in excess of 600 DB schemes in Ireland with total assets of over €60 billion, it is highly likely that we will see other employers face similar industrial relations dilemmas in the future.

For more information on the benefits and risks of closing your organisation’s DB scheme in favour of a DC arrangement, contact a member of our Pensions team.