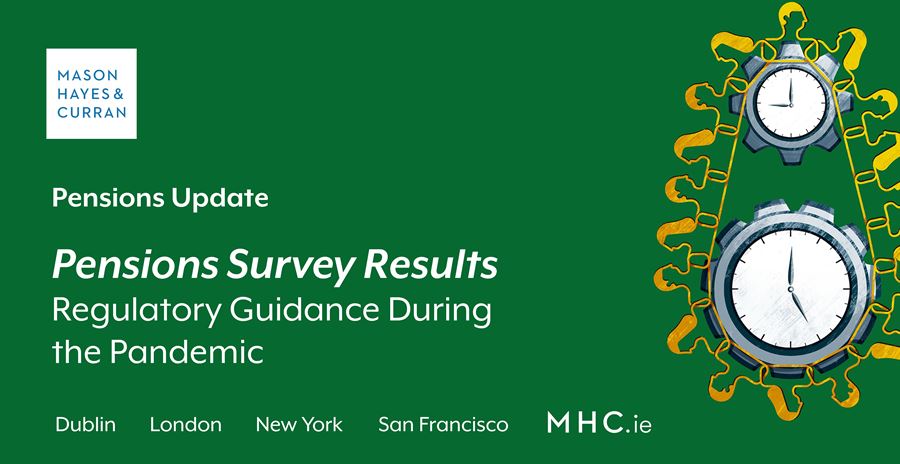 On 14 May 2020, we were delighted to co-host a webinar entitled Post COVID-19 Pensions with the Irish Institute of Pensions Management, which was co-hosted by our Head of Pensions, Stephen Gillick, and President of the IIPM, Elma Fox.

Prior to the webinar, a pensions survey was circulated to over 200 pensions industry professionals registered to attend the event. The results of the survey provide a unique insight into how the industry perceives the impact of the COVID-19 pandemic.

Here we take a look at the survey responses to a question on the pensions guidance provided by our regulatory authorities during the pandemic.

Regulatory Guidance During the Pandemic

Survey Question: How satisfied have you been with the pensions-related guidance that has been provided by the Irish regulatory authorities during the COVID-19 pandemic?

Three possible answers to this question were provided and respondents could choose one, they were:

The approach of the Pensions Authority

The Pensions Authority issued its initial COVID-19 announcement on 27 March and followed this with an update on 24 April.

The initial announcement suggested that scheme trustees contact administrators and service providers to assess the effect of the crisis on their schemes. It also asks trustees to prioritise payments to retired members and to ensure that contributions paid by members and employers are remitted promptly to trustees. The Pensions Authority also confirmed that it will take the present circumstances into account when assessing the completion of regulatory tasks by trustees and administrators.

In its subsequent update issued on 24 April, the Pensions Authority addresses some of the main concerns held by stakeholders on regulatory compliance and the employer contribution. The Authority confirms that it does not have power to waive statutory requirements in respect of deadlines, though it notes again that it will take the circumstances created by the pandemic into account when assessing compliance including those requirements relating to member communication and disclosure obligations. However, the update confirms that trustees and service providers will be expected to remain member focused and show that reasonable efforts were undertaken to meet statutory obligations.

While the update deals with the employer contribution issue, we discuss this in our related survey e-zine here. The update stresses that the employer’s obligation to make a pension contribution is governed by employment contracts, the rules of each scheme and by legislation and that the Pensions Authority’s power to intervene is a limited one.

Revenue has issued a detailed set of FAQs on the Temporary Wage Subsidy Scheme (TWSS). While some of the earliest versions of the FAQs failed to make any reference to pensions, this has since been remedied and the most recent version of the FAQs provide some guidance for employers and scheme members that are in receipt of the TWSS. Importantly, in its responses to the FAQs, Revenue confirms that “tax approval will not be withdrawn from an occupational pension for the reason that an employer who is in receipt of the temporary wage subsidy is not currently making contributions to the scheme”. The FAQs also confirm that pension contributions may not be deducted from the wage subsidy as it is to be paid in full to each employee.

The approach of the Pensions Regulator in the UK

The Pensions Regulator in the UK has issued a number of guidance notes categorised separately for employers, administrators, trustees and scheme members. The key activities that it has sought to highlight include:

The scams mentioned by the UK Regulator are those that attempt to lure members to transfer benefits and invest in “safe haven” assets. As equity markets fall and interest rates remain below 1%, pension investors may be more prone to succumbing to scams that offer an improbable return. The UK Regulator recommends that where members contact trustees with such a request that they ask members to “exercise extreme caution”. The Pensions Authority has not yet issued specific guidance on pension scams but in its announcement it warns that “markets are volatile and unpredictable, and the Pensions Authority cautions against making any immediate investment decisions unless absolutely necessary.”

In respect of administrative breaches of the law during the pandemic, the UK Regulator confirms that it expects them to occur and states that it will “maintain a proportionate and fair approach” in the actions that it takes to address any breaches. As noted above, the Pensions Authority has adopted a similar approach.

Though the UK Regulator has issued detailed guidance for each category of stakeholder, much of this guidance may have already been in the pipeline for the end of the Brexit transitional period on 31 December 2020.

A key take away from the regulatory guidance to date is that employers and trustees should obtain professional advice where there is uncertainty in respect of regulatory obligations, a scheme’s governing documentation and contracts of employment. No two employers or schemes are the same, in referring to the employer contribution in its 24 April update the Pensions Authority states that “Employers’ situations differ. There is no single answer for all employers and each employer has to consider its situation”.

For expert guidance on any pension issues presented by the COVID-19 crisis, contact a member of our award winning Pensions team.