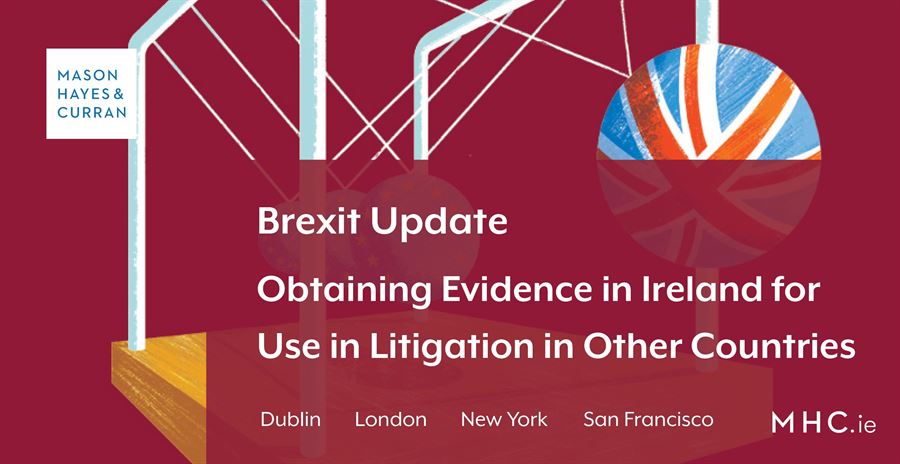 In light of the recent steady increase in multi-jurisdictional transactions and cross-border disputes, the number of applications brought to obtain evidence in Ireland for use in foreign proceedings is on the rise. How is this achieved? Evidence can be taken voluntarily from a witness in one jurisdiction for use in litigation in another jurisdiction without the involvement of the Irish courts. However, where a witness is not willing to give evidence voluntarily to a foreign court, an application to the Irish courts will be required. Different rules apply depending on whether the requesting court is within or is outside the EU.

The power of the Irish courts to take evidence for use in civil and commercial proceedings in other EU countries is governed by European Regulation (EC) 1206 / 2001, known as the Evidence Regulation. This allows for evidence to be exchanged between EU member states. The power to take evidence in Ireland for use in proceedings outside the EU, including the United States, is governed by the Foreign Tribunals Evidence Act of 1856 which remains law in Ireland.

Where a party to proceedings in one EU member state seeks evidence from a witness in Ireland, the process is straightforward and efficient. A request must first be lodged with the Irish courts using the forms specified by the Evidence Regulation. These forms require that various pieces of information be provided by the requesting court in support of the request, including:

Requests for evidence should be executed by the Irish courts within 90 days of receipt.

Obtaining evidence in Ireland for use in litigation in a non-EU country, including the United States

Ireland is not a signatory to the Hague Evidence Convention. Consequently, taking evidence in Ireland for the assistance of courts outside the EU remains governed by the Foreign Tribunals Evidence Act of 1856.

Under the 1856 Act, letters of request, known as “letters rogatory”, from the requesting foreign court must be sent to the Irish High Court. These letters request assistance by directing an Irish witness to appear for the purposes of providing evidence. They should identify the person to be examined, the issues on which they will be examined, and any documents which should be produced. These letters should also, where appropriate, specify that the requesting party’s lawyers may attend and examine the witness along with Irish lawyers when the evidence is being taken in Ireland. Although the procedure is discretionary and the request can be declined in whole or in part, the Irish courts usually adopt a facilitative approach to such requests.

Once an order is made by the Irish courts, they will appoint an individual, known as a Commissioner, to supervise the manner in which the evidence is taken at the deposition hearing. A transcript of the evidence given is prepared by a stenographer to be transmitted to the foreign court and used as evidence there. The party seeking to have the witness attend and give evidence is required to pay for any expenses that are incurred by the individual giving evidence.

The nature and extent of the impact of Brexit on the taking of evidence in Ireland for use in proceedings in the UK and vice versa will very much depend on what the future relationship will look like between the UK and the EU post 31 December 2020. Although the UK left the EU on 31 January 2020, the current trade negotiations between the UK and the EU during the ‘transition period’ which will end on 31 December 2020, have not yet reached an agreement or conclusion. However, what is certain is that in the event that no agreement is reached in those negotiations before 31 December 2020, the Evidence Regulation will cease to apply in this regard. This means that if no agreement is reached, all requests to obtain evidence in Ireland from courts in the UK post 31 Decmeber 2020, will be governed by the process under the 1856 Act outlined above, that being the procedure for countries outside the EU.

For more information on this topic, contact a member of our Dispute Resolution team.