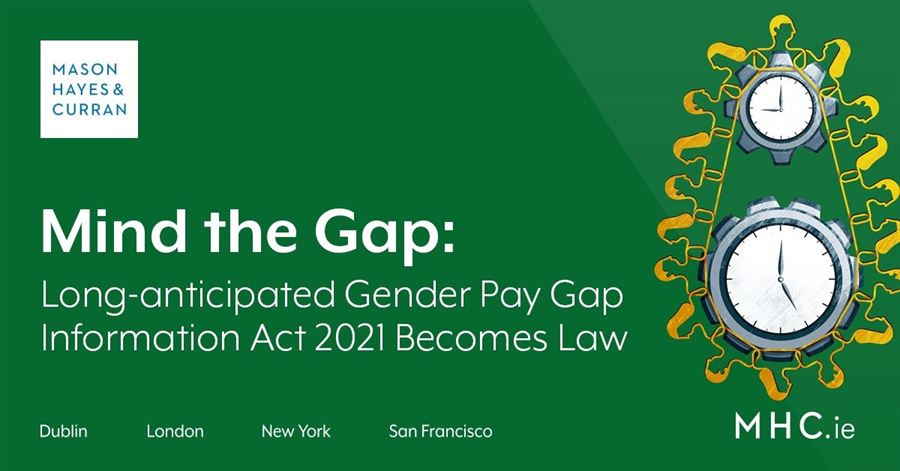 The Act amends the Employment Equality Acts 1998 to 2015 to require the Minister for Children, Equality, Disability, Integration and Youth (the Minister) to make certain Regulations. These Regulations require employers to publish information relating to the pay and bonus of their employees to identify whether there are any differences in pay and bonus referable to gender.

Where there are such differences, employers will be required to publish statements detailing the reasons why differences exist, and the measures, if any, taken by them to eliminate or reduce the gender pay gap.

Mandatory measures: what must be contained in the Regulations

The Act obliges the Minister to make Regulations requiring employers to publish information relating to the gender pay gap. The Minister is obliged to do so as soon as reasonably practicable after the commencement of the legislation. Companies will be required to publish information in relation to employee’s pay and bonus to demonstrate whether any differences in pay and bonus are preferable to gender and, if so, the size of such differences.

Under the Regulations, employers must publish details including:

It is anticipated that the Regulations will apply on a phased basis to employers with the following employee numbers:

• 250+ employees: The Regulations will apply in the first two years after their introduction, this is likely to be 2022

• 150-250 employees: The Regulations will apply in the third year

• 50-150 employees: The Regulations will apply in the fourth year

• <50 employees: The Regulations will not apply

Regulations to give effect to the provisions of the Act must now be drafted. Precise details on the manner and form of gender pay gap reporting will only become known once the Regulations are drafted. It is likely that a central website on to which employers will be required to upload their information will be established.

Optional measures: what may be contained in the Regulations

In addition to the above requirements, the Act provides that the Regulations may, but are not required to, prescribe the following:

• The class of employer, employee and pay to which the Regulations apply

• How the number of employees and pay is to be calculated

• The form and frequency of information to be published, which will not be more than once per year

• The publication of information by reference to job classifications

The Regulations may also require that employers ensure that personal data undergoes pseudonymisation, essentially a de-identification procedure, before or when published.

An employee who claims that his/her employer has failed to comply with the requirement to publish gender pay gap information may make a complaint to the Workplace Relations Commission (the WRC). If the WRC upholds the complaint, it may grant an order ordering the employer to comply with its gender pay gap reporting obligations. There is no provision for the payment of compensation to the employee or for a fine to be imposed on the employer.

The Act provides that where the Irish Human Rights and Equality Commission (IHREC) has reasonable grounds for believing that an employer has failed to comply with the Regulations, it may apply to the Circuit or High Court for an order requiring the employer to comply with an obligation under the Act. Consequently, an employer that fails to comply with a Circuit Court or High Court order may be held in contempt of that Court. This is a strong sanction which demonstrates the seriousness of these obligations.

The enactment of the Act is long anticipated. Regulations to give effect to the provisions of the Act must now be drafted. However, until we see the exact content of those Regulations, there is still uncertainty as to the precise form the publication of gender pay gap information will take. We will provide an update once the Regulations are drafted.

In circumstances where reporting obligations on employers are likely to be in place in a relatively short time period, we recommend that employers take measures now to establish whether gender pay gaps exist in their organisations. We also advise that employers contemplate the steps that they might take to reduce or eliminate a gender pay gap before mandatory pay gap information reporting commences.