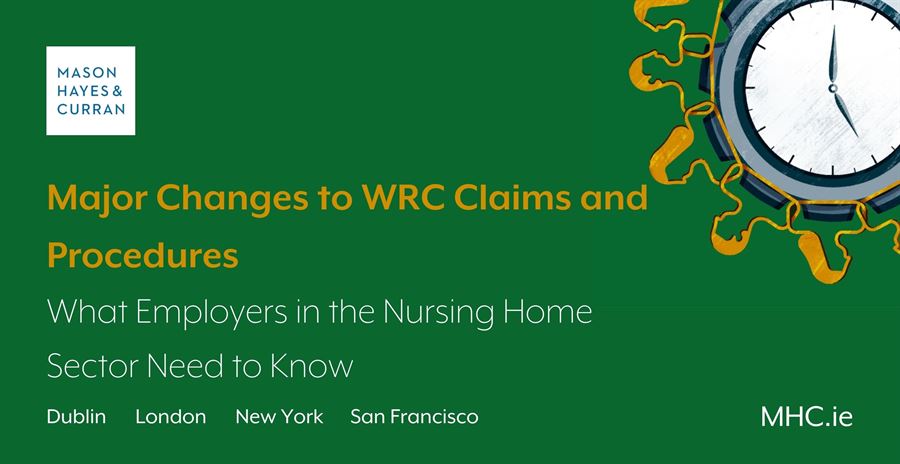 While nursing homes will be familiar with the results of statutory inspections being made public, up until recently, it had been the case that details of employment disputes were confidential, with the names of the entities deliberately withheld. However, this has now changed. It is important to be aware that once an employment claim is heard, the decision will name the nursing home as well as the staff involved. This means that now, more than ever, reputational damage from these claims being made public will have to be borne in mind.

In a seminal decision from April this year, the Supreme Court decided that the activities of the Workplace Relations Commission (WRC) constituted the administration of justice. As a result, the previous blanket requirement that WRC hearings take place in private, as well as the inability of the WRC to take evidence on oath/affirmation, and for there to be no penalty for the giving of false evidence, was deemed unconstitutional. We look at the impact of the Supreme Court decision on the processes adopted by the WRC and how this will affect employers in the nursing home sector.

In the ordinary course of business, members of the public, including members of the media, are now permitted to attend WRC hearings. This means there is increased potential for unwanted publicity.

Taking of evidence on oath

AO’s have the power to take evidence on oath. This means that any witness who provides evidence is now required to do so on oath.

Impact of COVID-19 on public access to WRC hearings

Due to current COVID-19 restrictions, the WRC is only permitted to hold remote hearings. Although this is likely to change from 22 October 2021, for the time being, a member of the public or media can more easily join a hearing by obtaining virtual log in details to the hearing.

As a consequence of the requirement for hearings to be held in public, parties’ names now appear on the WRC list of upcoming hearings. This schedule can be found on the WRC website and is updated on a weekly basis. Members of the public have access to this list which outlines the parties’ names and the specific legislation under which the claim is being heard.

Parties not anonymised in WRC decisions

Another important consequence of the ‘public’ requirement, is that WRC decisions are now published with the names of the parties included. Employers can no longer enjoy the benefit of anonymity, which may lead to more settlements and/or agreements via mediation.

There has always been the right to cross-examine witnesses before the WRC. This position has not changed, although the new procedures place an enhanced focus on this right.

Do these procedural changes apply to all hearings?

No. The changes do not apply to industrial relations disputes. These continue to be heard in private. The changes outlined above only apply where the investigation or hearing amounts to the ‘administration of justice’ which occurs in most employment and equality rights claims.

Equally, WRC mediation is unaffected by the WRC procedural changes and remains an option in all cases submitted for adjudication and continue to be entirely confidential.

In summary, employers should bear in mind that:

For more information or with any questions, please contact Avril Daly.