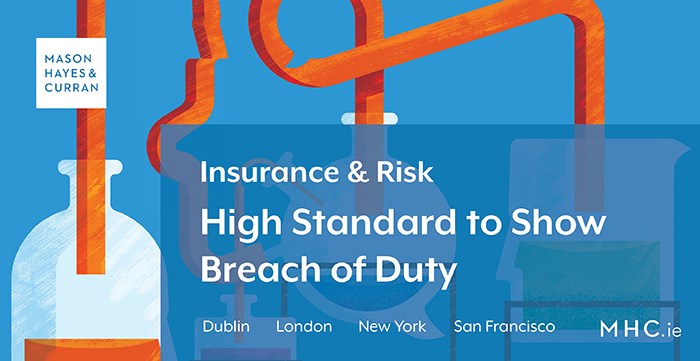 Two recent judgments demonstrate how the courts are setting a refreshingly sensible bar for plaintiffs alleging negligence on the part of defendants.

In the recent personal injury case Donnelly v Dunnes Stores, the plaintiff employee, Ms Donnelly, injured herself while putting her hand into a cardboard box to retrieve t-shirts. She leaned too close to the box and her eye came into ‘inadvertent contact’ with the corner of the flap of the box.

Ms Donnelly accepted that she had unpacked “thousands of boxes” during her 13 year term of employment with Dunnes Stores. However, she claimed that the pressure she was under, due to understaffing and being overworked, resulted in her inadvertence. She alleged that Dunnes Stores was therefore the “legal cause” of the accident. She was awarded a total of €31,000 in damages in the Circuit Court. The defendant appealed the case.

In the High Court, Mr Justice Twomey referred to the seminal case of Byrne v Ardenheath. He said that the Court is obliged to take ordinary common sense into account when deciding what amounts to reasonable care, where the activity being carried out is not specialist or complex. He found that taking t-shirts out of a box was “the epitome of an activity which is not complex”.

He also reiterated that caution should be taken in assessing expert evidence in these types of cases. He noted that the plaintiff’s civil engineer had said that, in his opinion, the plaintiff was under unreasonable time pressure. However, the only evidence of this was the plaintiff’s own assertions to that effect. He held that this was insufficient to prove a breach of duty on the part of her employer.

He stated that, “...employers do not become legally responsible for the failure of their employees to take due care in the workplace merely because the employees are under some time pressure at work.”

Similarly, the recent case Larkin v Carlingford Community Development Company demonstrated the courts setting a reasonable standard in assessing alleged negligence. In this case, Mr Larkin was playing indoor football at a centre occupied by the defendant. He suffered an injury to his left leg and knee when his shoe came in contact with sticky residue on the floor. The residue was allegedly left behind by duct tape that had been used to secure temporary carpet for a prior event.

Mr Larkin claimed the accident was caused by the defendant’s negligence in allowing the sticky residue to remain on the floor or failing to warn him of its presence.

Mr Larkin failed to make a formal report of the incident to the management of the centre. Therefore, the defendant did not have an opportunity to carry out a prompt investigation.

The defendant did, however, adduce witness evidence from a fitness instructor who used the hall a number of times a week around the time of the accident. She inspected the floor several times before conducting her classes and had never discovered any sticky residue on it.

A number of witnesses also confirmed that temporary carpet had not been installed between December 2015 and 6 August 2016. The incident complained of allegedly occurred within these dates.

When the matter came before the High Court, Mr Justice Keane inferred that photographs taken by Mr Larkin of the sticky floor must have been taken after 6 August 2016 and did not represent the floor at the time of the alleged incident. Mr Justice Keane dismissed the claim on that basis.

In the Dunnes Stores judgment, Judge Twomey referred to the “chilling effect” of claims on businesses, the State, private or charitable initiatives and the cost of insurance. He also noted the “social cost of human tendency to wish that an injured person be compensated”. He acknowledged that he felt some sympathy for the plaintiff, but noted that it was his duty to decide matters based on law, rather than “a desire to compensate for every personal injury suffered”.

The Larkin case highlights that a plaintiff is obliged to prove negligence and breach of duty on the part of the defendant and will not be compensated simply because they have suffered an injury.

Both cases demonstrate a strict adherence by the court to the legal principles of negligence, despite both judges expressing sympathy for the plaintiffs who sustained genuine injuries.

The effect of Byrne v Ardenheath continues to be felt and decisions in this area should be watched with increasing interest.