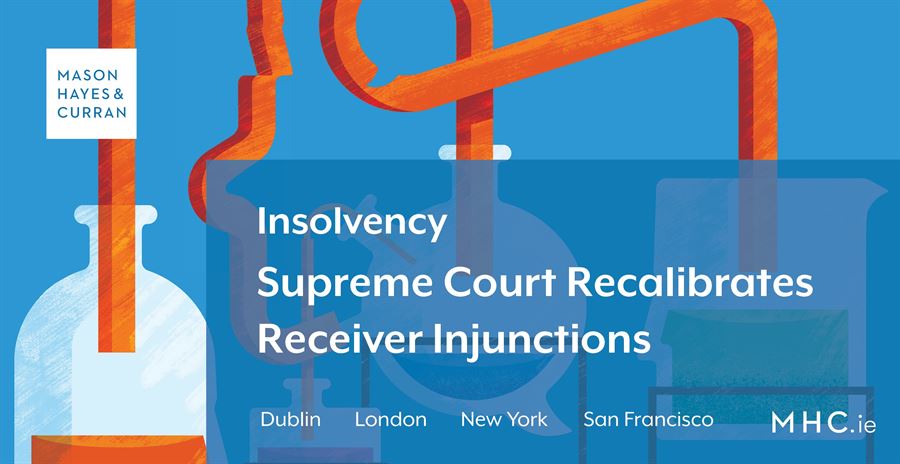 The Supreme Court has clarified how strong a case is required when receivers seek interlocutory injunctions and commented on the requirement to progress the litigation after obtaining these injunctions.

The standard to apply to receiver injunctions

One limb of the test that the courts consider in deciding whether or not to grant an interlocutory injunction is the apparent strength of the applicant’s case at a full hearing.[1] In particular, the courts will consider whether the applicant has:

The first reported mention of the Maha Lingham test in receiver litigation was in 2011,[4] when Laffoy J. held that although orders sought were phrased as mandatory, their effect was prohibitory in that they required the defendant to refrain from trespass.

In Charleton & anor -v- Scriven[5] the Supreme Court considered an appeal by a borrower against an injunction in favour of the receivers.

The Chief Justice, delivering the judgment of the Court, distinguished between orders enabling a receiver to collect rents (and retain them pending the full hearing) and orders that would essentially allow receivers to sell the property. He held that:

Was the appointment invalid?

The defendant argued that the receivers were therefore invalidly appointed.

The Court noted that the mortgages themselves defined the persons to be appointed as “receivers and managers” as “receivers”. It held it was arguable that the use of the word receiver in the deeds of appointment (as documents contemplated by the mortgages) would carry the same definition.

The Supreme Court’s view of this issue, albeit at an interlocutory stage, contrasts with the view taken by McDonald J., in the High Court, on effectively the same issue where he considered that the receiver “would have an uphill struggle in persuading the Court at trial that he has been validly appointed”.[6]

The Court also noted the length of time since the injunction was granted, without the proceedings being determined. The Chief Justice noted that there is an obligation on a party who obtains an injunction to have the issues finally determined in a timely way. He further noted that it may be open to a court to consider whether a party should be allowed to keep the benefit of an interlocutory injunction for a long period of time.

The Supreme Court has restated the principle that an interlocutory injunction is what it says on the can – an order to preserve the position pending the trial of an action.

Viewed through this lens it is entirely reasonable that it should be easier to obtain an injunction allowing the receiver to collect rents than to obtain one effectively allowing the sale of the property.

It is also reasonable that parties who have obtained an interlocutory injunction should take steps to bring proceedings to a conclusion. However, it indicates that receivers, and lenders issuing proceedings, need to be prepared to run the full proceedings, or risk losing the benefit of the injunction. This may bring a sharper focus to the drafting of proceedings and estimation of legal fee budgets before embarking on such litigation.

Separately, the Court’s consideration of the receiver v receiver and manager issue appears to provide a strong hint as to how this issue might be determined at a final hearing – likely upholding the validity of the appointment.

[1] The other limbs of the test are that damages would not be an adequate remedy and the balance of convenience favours granting the injunction.