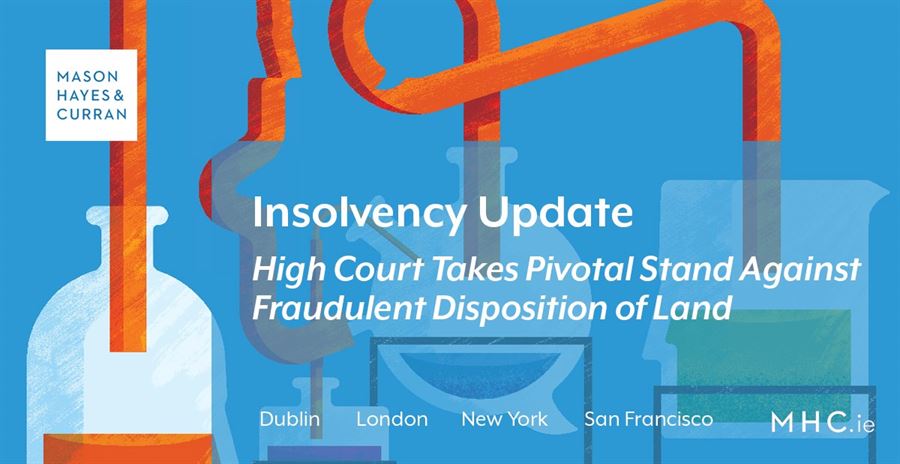 Section 74 of the Land and Conveyancing Law Reform Act, 2009 (Section 74) provides that any voluntary disposition of property made with the intention of defrauding a creditor or other person may be declared invalid, where by any person is prejudiced by those circumstances. The word “defraud” in this context has been deemed to carry the meaning of depriving creditors of their ability to recover property that would otherwise be applicable to their benefit.

Historically, fraudulent intent has been a difficult obstacle to overcome and many creditors have been deterred from initiating such proceedings.

In Allied Irish Banks Plc v Martin Burke and Deirdre Burke [2018] IEHC 767, Mr Burke made two voluntary transfers of certain property to his wife in 2017 and 2018. Both transfers were made after AIB obtained judgment in excess of €5million against Mr Burke in July 2017.

AIB provided evidence that the combined value of the two properties transferred was in excess of €1million. In defending the case, Mrs Burke relied on the fact that there was a third property owned by Mr Burke secured in favour of AIB that would carry an asking price of €5.5 million and would sufficiently discharge the debt owed to AIB. AIB argued, amongst other things, that the asking price of the property is very different from its value.

Moreover, AIB contended that, even if the value of the third property was as high as suggested by Mrs Burke, the test for the application of Section 74 is not whether a creditor might recover sufficient funds by taking a different approach, but rather whether the actions in question hinder the creditor in the recovery of the debt.

Mr Justice Twomey in delivering his judgment remarked “in a situation where AIB has judgment for over €5 million against Mr Burke, it is a necessary and probable consequence of the conveyance of the two properties at issue at the time when they were conveyed (i.e. shortly after judgment had been obtained against Mr Burke), that AIB would be hindered in its recovery of that amount.”

Accordingly, the Court held that the two transfers to Mrs Burke were made with the intention of defrauding creditors and were consequently void.

This judgment clarifies that it is not necessary to show that a creditor will be prejudiced by a transfer of assets to prove fraudulent intent. Rather, it is sufficient to show that prejudice is a probable consequence of the transfer.

As a result, this case is an important and useful precedent for creditors as it has clarified various aspects of fraudulent intent and fraudulent dispositions in the context of challenges to voluntary dispositions pursuant to Section 74.