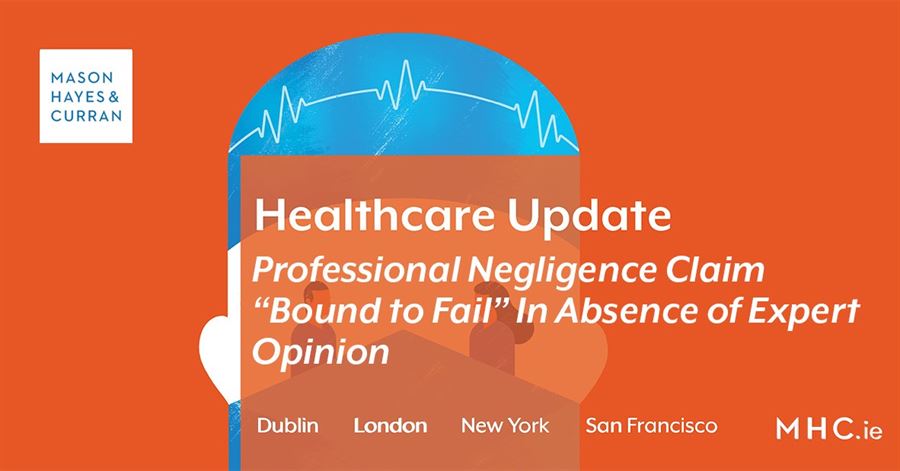 In February 2019, the Court of Appeal upheld the decision of the High Court in dismissing a medical negligence claim against two defendants due to the plaintiff not possessing expert medical evidence supporting a claim against those defendants. We look at the reasoning of the Courts in the case of Andrew Mangan (a minor) v Julian Dockeray and By Order Brian Denham and Mount Carmel Hospital.[1]

Mr Mangan issued a personal injuries summons (PIS), against the obstetrician only, in June 2008 alleging negligence relating to his antenatal care causing injury. No attempt was made to serve this PIS at the time and, subsequently, an application to renew the PIS was successfully made in July 2013. The obstetrician brought an application to join the paediatrician and Mount Carmel Hospital as third parties to the proceedings and this application was grounded on an affidavit sworn by the obstetrician’s solicitor on record. The affidavit stated that an expert report had been obtained which criticised the care provided by the paediatrician and maintained that Mount Carmel Hospital was an inappropriate setting to provide this type of neonatal care. It is relevant that the expert report itself was not exhibited to this affidavit. Requests for a copy of this expert report were denied and therefore, Mr. Mangan’s legal team never had sight of the obstetrician’s expert report.

During the time lapse from 2008 to 2013, Mr Mangan had undertaken very extensive investigations with medical experts. Their expert medical opinions were that Mr Mangan’s condition was not caused during the neonatal period. It was their opinion rather, that it was the obstetrician’s negligent antenatal management which caused Mr. Mangan’s injuries.

The application to join the paediatrician and hospital as third parties came before the court in November 2016 when the plaintiff successfully applied to have these parties joined as co-defendants. Mr Mangan served an amended PIS which pleaded that he did not possess any expert medical evidence supporting allegations of actionable and causal negligence against the paediatrician or the hospital. However, rather reliance was being placed upon the expert medical opinion of the obstetrician.

Application of the paediatrician and hospital to dismiss the claim

The paediatrician and the hospital relied upon several grounds including Order 19 Rule 28 of the Rules of the Superior Courts (RSC) in seeking a dismissal of Mr. Mangan’s claim. It was argued that no reasonable cause of action was disclosed and the claim was frivolous, vexatious and an abuse of process. It was submitted that the plaintiff’s pleadings openly admitted that he had no expert evidence to support the claim against the paediatrician or the hospital. Emphasis was placed on a number of High Court and Supreme Court decisions which set out that there is an obligation on any party intending to sue another alleging professional negligence to obtain supportive expert opinion first before embarking on this course – Reidy v National Maternity Hospital[2] and Cooke v Cronin[3]. They also contended that a plaintiff is not entitled to sue a defendant in professional negligence on the sole basis of an assertion made by another defendant. This means that a defendant should not be susceptible to a plaintiff “piggybacking” on a claim being made by a defendant against another party in a third party application.

Mr. Justice Binchy found in favour of the paediatrician and hospital in dismissing Mr Mangan’s claim against them. The following are the key points in reaching his decision:

Mr Mangan appealed the decision of the High Court. The Court of Appeal was asked to consider whether or not it should allow Mr Mangan further time to see if an expert report could be obtained for the purpose of maintaining a claim against the paediatrician and hospital. In summary, the appeal was dismissed. The Court of Appeal was satisfied that the High Court had correctly applied the law to the facts of the case and reached a conclusion which could not be criticized.

In coming to its decision the Court of Appeal was critical of the very long timeline that arose in the case and felt that the prejudice to the paediatrician and hospital if the Court were to allow Mr Mangan further time to obtain medical reports would far outweigh any benefit that might be gained by Mr Mangan.