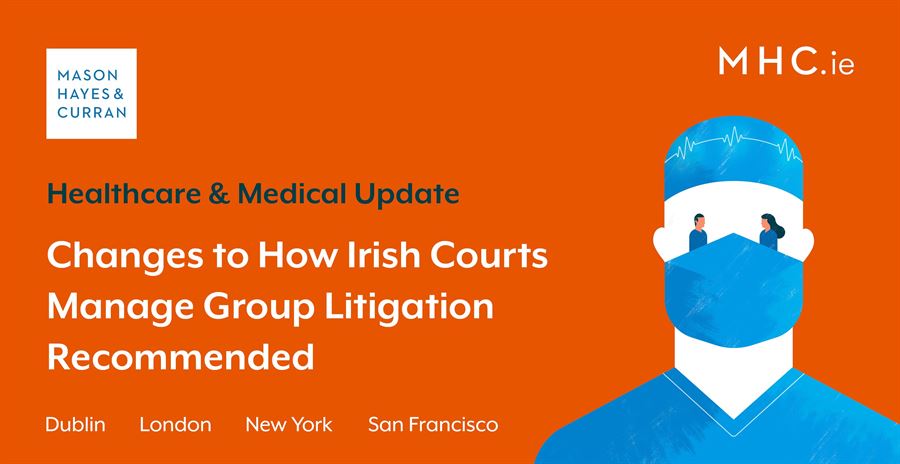 Multi-party actions in Ireland are currently not an option. Multi-party litigation in Ireland generally occurs by way of representative actions and test cases. However, there are strict requirements for representative actions which mean they are unsuitable for many cases. In addition, test cases do not avoid each claim having to be processed separately by the courts.

The Law Reform Commission in 2005 recommended that a comprehensive procedure of multi-party actions be considered. Since then, views calling for the introduction of a class action procedure in Ireland have received greater publicity, with a Private Members Bill in 2017. The government agreed to refer this issue to a Review Group for consideration as part of a Review of the Administration of Civil Justice. In December 2020, the Review Group’s recommendations were published.

The Review Group found that it was clear that there is a need to legislate for a comprehensive Multi-party Action (MPA) procedure in Ireland.

The Review Group agreed with the Law Reform Commission, preferring a model along the lines of the Group Litigation Order (GLO) procedure in England and Wales. The GLO model would be an “opt in” approach as opposed to the “opt out” approach under the US class action model.

The recommended MPA procedure – how would it work?

In addition, the Review Group considered whether it should supplement its recommendation by recommending the permission of third party litigation funding or contingency fee-based remuneration arrangements. However it considered that this raised issues of policy which required more detailed discussion. The Review Group simply noted the arguments in favour and against the options but did not express an opinion.

What kind of cases would this be useful for?

The Review Group noted that since the introduction of the GLO model in the UK, the bulk of the cases dealt with have been in consumer-focused areas. This included product liability claims, tax disputes, environmental claims and industrial disease claims.

In Ireland, it is clear that the MPA procedure could have a huge impact on healthcare litigation. If implemented, it could increase efficiency and reduce costs where multiple claims arise from the same or similar set of circumstances.

Without an MPA procedure in Ireland, we have seen alternative dispute resolution (ADR) schemes established to resolve claims outside of the court process. In 2015, there were approximately 1,000 claims regarding allegedly defective hip implants pending before the court. Each was estimated to last up to six weeks if it went to hearing. The court authorised the setting up of an ADR scheme to deal efficiently with these claims. The CervicalCheck Tribunal provides another example, although the take up thus far amongst plaintiffs has been limited. In the 1990s, the Army deafness settlement scheme allowed soldiers to settle claims without resorting to the courts.

Time will tell whether the recommended MPA procedure will come to fruition in Ireland. Certainly, if it does, it will change the conduct of many cases that come before the courts. In our view, this will be for the better both in respect of the efficient management of litigation and (hopefully) a resultant reduction in legal costs.

For more information, please contact a member of our Dispute Resolution team