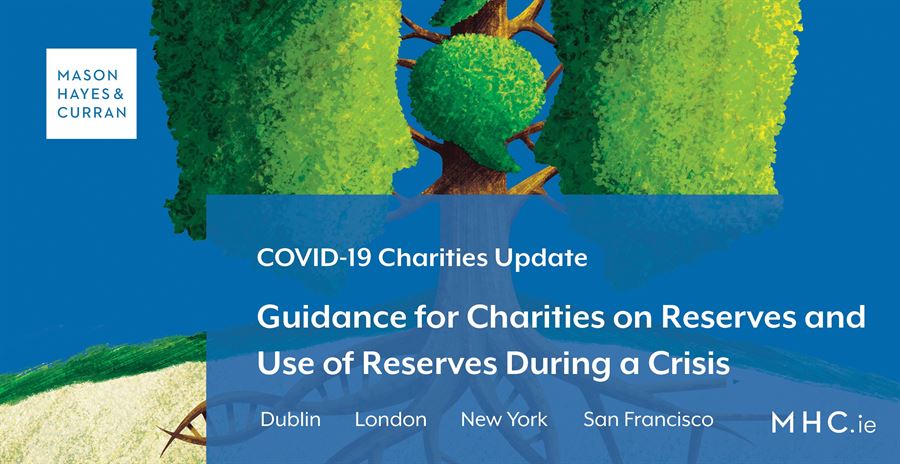 The Charities Regulatory Authority (CRA) announced on 13 May the publication of a guidance document titled “Guidance on Charity Reserves”.

The CRA recommends that the following should be included in a charity’s reserves policy:

What is an appropriate level of reserves?

The CRA recognises that the appropriate level of reserves will vary from charity to charity. Factors which charities should take into account in determining whether to have reserves include:

Charity trustees should also consider the purpose for which the charity requires reserves, such as if there is uncertainty over future income, or if the charity is planning for unforeseen emergencies.

We understand that many charity trustees are concerned about the significant impact that COVID-19 is having on their charities and the services they deliver. In times of crisis, charity trustees should meet to consider the financial situation of their charity, review their previously agreed short, medium and longer term plans, consider the options available to them and the changes which need to be made to minimize costs and maximize cashflow so that the charity can continue to carry out its charitable activities.

When considering the options available, charity trustees can consider which of their cash funds are available for use. Certain funds may be designated for a particular project, and if it is within the power of the charity trustees to change that designation, they might do so if they believe it is in the best interests of the charity. Other cash funds may be restricted, and the charity trustees are obliged to spend them in a specific way. This “restricted” designation should not be changed without taking advice. Subject to what the charity's existing reserves policy says, reserves can be used to help cope with unexpected events like those we are faced with at the moment. The CRA guidance states that reserves can be used by a charity to deal with unforeseen events.

We would be happy to advise you further if your charity is considering using its reserves or restricted funds at this time.

The CRA’s guidance on charity reserves is extremely timely as charity trustees are currently considering financial difficulties in their charity caused by COVID-19 and reviewing what funds they might have available for use.

The guidance provides charity trustees with useful advice about planning and managing reserves within a charity.

The guidance makes it clear that there is no “one size fits all” approach for charities in relation to reserves.