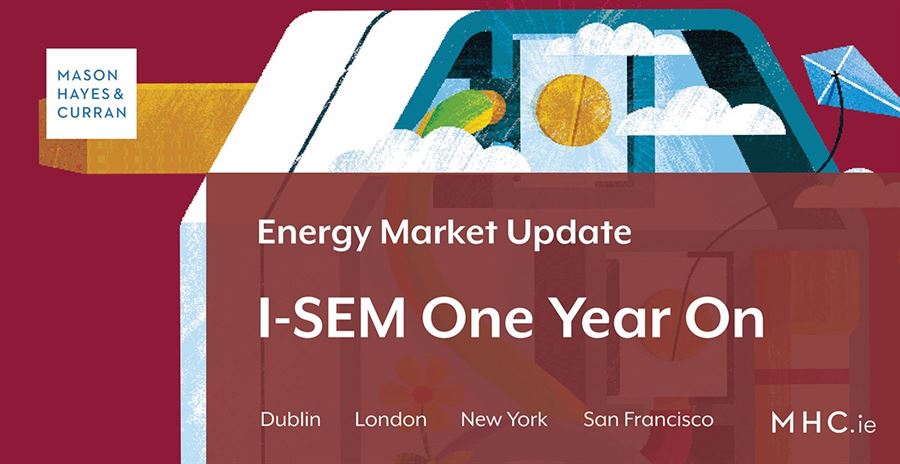 On 24 January 2019, little more than 3 months after I-SEM “go-live”, imbalance prices in the Irish wholesale electricity market hit a peak of €3,774/MWh on a half-hourly basis. These are the highest price spikes seen in the I-SEM to date, and an outcome market participants were led to believe would not occur. Through the operation of the capacity market contracts, this pricing event resulted in the Single Electricity Market Operator (SEMO) imposing very significant financial levies, in the form of ‘difference charges’, on Irish generators cumulatively totalling just over €7 million – for less than half a day’s market activity.

Mason Hayes & Curran acted for a major Irish generator in contesting these difference charges before an independent Dispute Resolution Board (DRB) established under the I-SEM Trading and Settlement Code (TSC). We successfully persuaded the DRB to substantially reverse the levy imposed by SEMO and we thereby recovered €1.69 million for our client. This is one of very few successful DRB determinations that have been made, to date, against SEMO, EirGrid and SONI under the TSC.

On the morning of 24 January 2019, SONI (the transmission system operator (TSO) for Northern Ireland) issued an amber alert warning that the difference between supply and demand was extremely tight.

This occurred due to a combination of unusual events. The previous day, Coolkeeragh 400MW power station had declared an unplanned outage due to technical problems. On 24 January 2019, wind in Northern Ireland was below forecast and renewable generation was very low.

As the lunchtime peak approached, there was an abundance of electricity in the South, but an increasing demand for power in the North. Despite there being more than enough power on an all-island basis, generators in the Republic of Ireland could not meet the demand in Northern Ireland. The North-South tie-line was flowing as much power from the South to the North as its operating limits would allow. Although there was an excess of power on an all-island basis, it was essentially trapped south of the tie-line.

To resolve the imbalance in Northern Ireland, the TSO dispatched two fast-acting plants paying prices of €6,342/MWh and €5,637/MWh respectively. This set ‘imbalance prices’ of between €981/MWh and €3,774/MWh, creating the price spikes illustrated in the graph below. 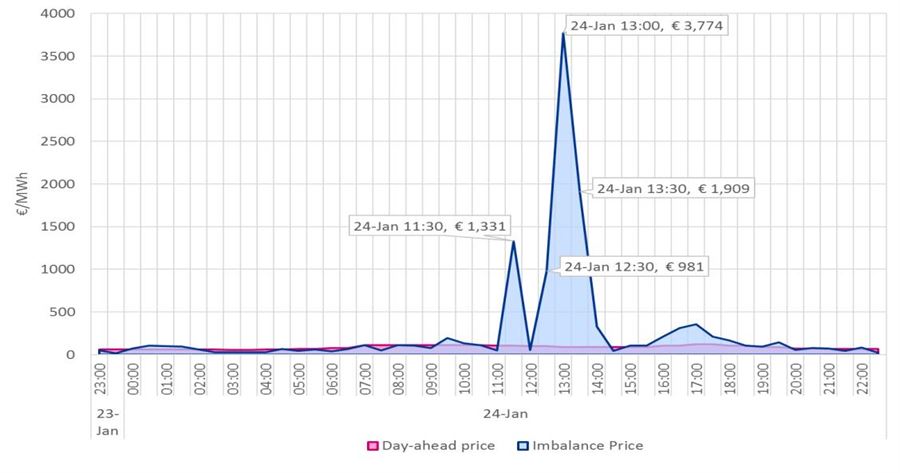 Generators holding “reliability options” (having been awarded these in the capacity market) were acutely impacted by these price spikes.

Reliability options are a type of contract for difference that are awarded under the I-SEM Capacity Market Code and financially settled under the TSC. They give generators a regular income stream from suppliers, but oblige generators to make payments back to suppliers when balancing prices spike above €500/MWh. Reliability options are designed to incentivise generators to ensure that they are available to generate when power is scarce and prices are high, in order to reduce their exposure to difference charges. In turn, reliability options protect suppliers against high electricity prices by effectively capping their exposure at €500/MWh.

The TSO’s balancing actions on 24 January 2019 resulted in imbalance settlement prices grossly exceeding the €500/MWh strike price. As a result, SEMO levied difference charges of over €7 million on generators with reliability options, despite the fact that there was nothing that generators in the Republic of Ireland could do to resolve the system imbalance in Northern Ireland, or to avoid these penalties. Although SEMO collected over €7 million from generators on 24 January, only €1.6 million was in fact paid out to suppliers in Northern Ireland.

Monies collected through difference charges under the TSC are held in a “socialisation fund”. The over-recovery of charges from generators relative to the needs of suppliers on 24 January 2019 resulted in the fund becoming over-capitalised to a very significant extent, creating a surplus of €5.4 million in one single day.

Disputes under the Trading and Settlement Code

After our client was levied with difference charges in excess of €2 million, despite being available to generate on the day at a fraction of the cost of the plant dispatched by the TSO, it initiated the dispute process under the TSC, raising a Pricing Dispute and a General Dispute against SEMO, EirGrid and SONI.

The TSC provides that, if disputes are not first resolved through good faith negotiations, they are referred to an independent DRB for determination. Following completion of the steps detailed in the TSC dispute procedure, and the exchange of detailed written submissions, our client’s disputes came before a DRB for hearing in June 2019. Rory Kirrane and Hannah Devoy of MHC conducted the hearing on behalf of our client.

Market response to the pricing events

Of particular significance to the disputes was the fact that the risks giving rise to the pricing events were known to the market prior to 24 January 2019. Events of a lower magnitude had occurred in October 2018, almost immediately after the introduction of the I-SEM trading arrangements.

This led to unsuccessful efforts by our client and other market participants to modify the TSC to remove this unmanageable and unintended market exposure. No modifications were made to the TSC, and instead a working group was established to consider the issue further.

After the price spikes of 24 January 2019, the SEM Committee directed SEMO to raise an urgent modification to the TSC to implement a specific change. This modification (MOD_09_19) removed certain constraints, including the North-South tie-line constraint, from the imbalance pricing process, to reduce the possibility of further extreme pricing events. This modification took effect from May 2019. Had it been in place on 24 January 2019, the price spikes the subject of the disputes simply would not have occurred.

The DRB found that, through actions of the modifications committee, the SEM Committee, and the Regulatory Authorities, the market had formed a clear consensus that the events of 24 January 2019 were undesirable and inconsistent with the objectives of the TSC. The market response had also acknowledged that generators could not properly manage or mitigate their exposure under their reliability options.

The DRB agreed that our client had been disproportionately affected by very material penalties, despite not being able to do anything to either resolve the system imbalance in Northern Ireland, or to avoid the charges. It was therefore entitled to recover €1.69 million from the socialisation fund, by way of equitable remedy.

A key element of the decision was the DRB’s acceptance our client’s case that the DRB was empowered - and in fact required under the TSC - to make a determination based on the principles of fairness and equity.

The DRB’s determination became final and binding in July 2019.

This was a significant outcome for our client and one of very few successful market participant awards, and possibly the most substantial, under the TSC since the introduction of the all-island market in 2007.

We will be hosting a workshop in October / November 2019 to mark the one year anniversary of the introduction of the I-SEM trading arrangements. For more information, please contact a member of our Energy, Utilities & Projects team.