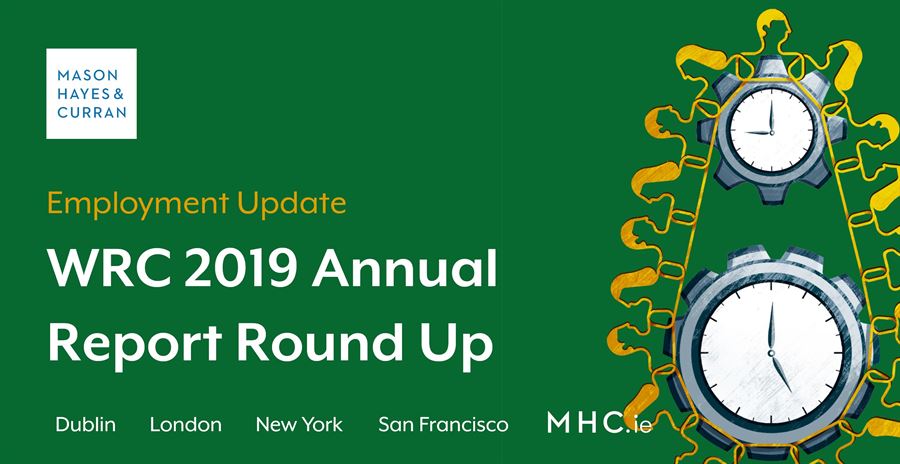 The Workplace Relations Commission Annual Report provides useful insights into the activities of the WRC and the numbers of complaints received in 2019.

The Report highlights several positive developments by the WRC. For 2019, these include a new regionalised office in Ennis which serves users in the WRC Mid-West region and a new website which is intended to be more interactive and process-oriented. The new website, introduced in May last year, is a welcome change for practitioners in particular, and will be subject to a review by user groups and stakeholders later this year. The WRC is also in the process of building out a new web-based, user friendly complaint form during 2020.

2019 complaints were largely broken down into the following categories:

Hours of work were by far the most common complaint submitted in 2019, with 6,266 complaints lodged in total. This is over three times the number of complaints of this type received by the WRC in each of the previous two years and now represents the highest complaint type (previously complaints relating to pay were the most prevalent). The Report notes however that this complaint category reflects the nature of the complaints submitted during the above mentioned “spike”.

Conversely, there is a noticeable decrease in equal status complaints lodged with the WRC. In 2019, 648 Equal Status claims were lodged, a 25% decrease from 2018. Other equality and discrimination complaints were down 14% on 2018 figures. Unfair dismissal claims remained largely comparable to 2018 figures, with 2,166 complaints lodged in 2019.

The Report notes a sizeable increase in recovery of unpaid wages by the WRC. €3.9m was recovered in unpaid wages in 2019, representing an increase of 20% on the 2018 figure.

Parties to a complaint may be offered the option of mediation where the WRC believes the case is suitable and where both parties are agreeable to the use of mediation. The WRC offers in person and telephone mediation. Of 2,000 cases where intervention was offered, mediation occurred in 1,024. Of those, about 25% were in person. Of the total number of cases proceeding to mediation, 45% were diverted away from adjudication. The WRC continues to actively promote mediation.

The Report outlines that roughly the same amount of adjudication hearings took place in 2019 when compared to the previous year, and notes that the numbers reflect an improved linking of related cases which reduces the numbers of hearings required.

The median time that decisions issued in 2019 was 230 calendar days from the date the complaint is received to the decision issuing. This marks a 51 calendar day improvement on 2018, and a vast improvement on the total waiting time that existed when the WRC was first established in 2015.

The number of fixed payment and compliance notices issued in 2019 decreased when compared to 2018 figures:

125 employers were convicted in summary proceedings in the District Court in 2019, close to a 100% increase on 2018 figures. Employers may have summary proceedings brought against them for failure to comply with a statutory obligation, for example employment permit or working time breaches.

The Workplace Relations Commission continues to play a pivotal role in Ireland’s employment law and industrial relations landscape. The 2019 report reflects the ongoing efforts of the Commission to adapt and improve its services for the benefit of all service users. The information contained in it also reflects the experience of employees and employers and the issues that bring them into conflict, some of which change from year to year to reflect trends in our society and economy. The impact of COVID-19 will make for interesting reading in the 2020 report.