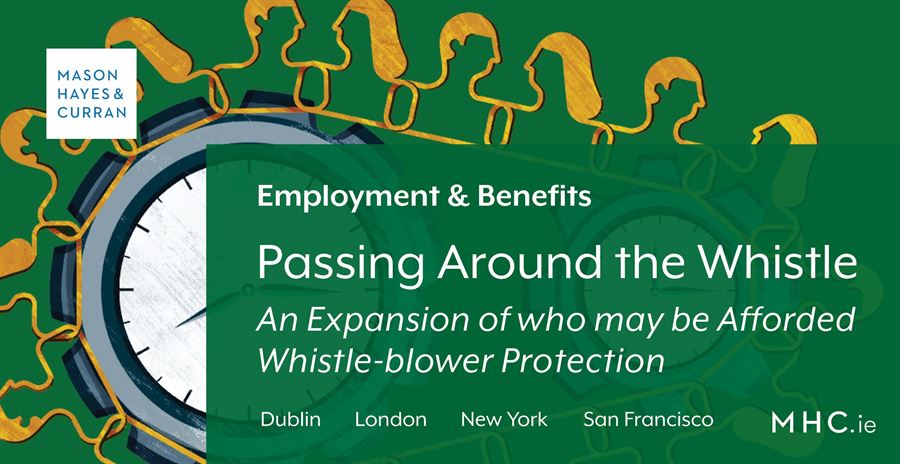 In Ireland, whistle-blower protection is provided by the Protected Disclosures Act 2014. The 2014 Act largely mirrors UK whistleblowing legislation. In both jurisdictions, to qualify for protection under the Act a person must come within the definition of a worker. In general, this requires that there is a contractual relationship between the person and an employer.

The definition of a worker under the Act includes contractors, sub-contractors, consultants, self-employed individuals, agency workers, interns, trainees and members of the Permanent Defence force and Reserve Defence force. However, the definition does not incorporate office holders, including judges, company directors, company secretaries, or board members.

Ms Gilham argued that whistle-blower protection should have been afforded to her disclosures and that she had suffered detriment, which included being undermined and bullied by fellow staff, as a result of her disclosures.

The Ministry of Justice successfully argued in the UK employment tribunal, EAT and Court of Appeal, that as a district Judge, Ms Gilham was an ‘office-holder’ and not a ‘worker’ for the purposes of UK protected disclosure legislation. As a result, it was determined by the tribunal that her disclosures could not avail of whistle-blower protection.

The UK Supreme Court allowed Ms Gilham’s appeal. The Court agreed with the lower UK courts in holding that a Judge is not a ‘worker’ for the purposes of the Employment Rights Act 1996, as a judge is not engaged in a contractual relationship. However, the panel of Supreme Court Judges unanimously agreed that the failure to grant Ms Gilham whistle-blower protection contravened the rights afforded to her under the European Convention of Human Rights (ECHR).

It was considered that in exercising her right to freedom of expression under Article 10 of the ECHR, Ms Gilham was treated less favourably than others, in a comparable situation, in relation to her exercise of that right i.e. she was not provided with whistle-blower protection whereas an individual who qualified as a ‘worker’ would have been. Article 14 of the ECHR provides that the enjoyment of rights shall be secured without any discrimination on grounds ‘such as sex, race, colour….or other status.’ The UK Supreme Court were satisfied that an occupation classification i.e. office holder, comes within the remit of ‘other status’. As such, Ms Gilham experienced discrimination in exercising her freedom of expression rights, due to her status.

The UK Supreme Court held that Ms Gilham was entitled to whistle-blower protection.

The EU Whistleblowing Directive[2] (Directive) was formally adopted by the European Council in October 2019 and is due to be transposed into Irish law by mid December 2021.

Although the Directive does not drastically vary the comprehensive whistleblowing measures in place in Ireland, it does extend the definition of ‘whistle-blower’ to encompass ‘legal persons’ as well as natural persons. The Directive further provides protection to company shareholders, non-executive directors, volunteers and unpaid trainees/interns.

Other notable changes flowing from the Directive are:

The new decade heralds not only changes in whistleblowing legislation but also the likelihood of a change in attitudes generally towards making protected disclosures. Many high profile disclosures which captured the empathy of the general public were made in the last decade. This societal shift away from fear or shame in making a protected disclosure has further been encouraged by the courts and by legislative efforts. In addition, the age of social media has given people the power to speak out in a manner like never before.

With the potential of an increase in the volume of disclosures, it is imperative that employers ensure they have comprehensive policies and procedures in place to facilitate employees who wish to make a protected disclosure and to investigate and address disclosures as an integral part of its business.

For expert advice on the likely impact of the EU Whistleblowing Directive on Irish employers, contact a member of our Employment & Benefits team.