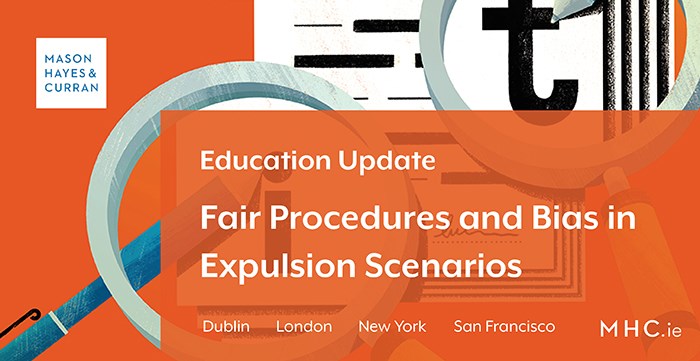 A student was suspended and subsequently expelled by the Board of Management for bringing a knife into a secondary school. His mother appealed the decision to expel to the Secretary General of the Department of Education and Skills under Section 29 of the Education Act 1998.

An appeals committee was appointed to hear the student’s case and an appeal hearing took place, which lasted two days. The student’s mother was assisted at that hearing by an advocate who played a very active role and raised numerous concerns in advance of and throughout the hearing. The appeals committee dismissed the appeal and upheld the Board of Management’s decision to expel the student.

The student’s mother then issued High Court Judicial Review proceedings regarding the decision of the appeals committee. The Board of Management was a Notice Party to those proceedings and was represented by our team.

Mr Justice Noonan dismissed the application and rejected all arguments of bias and unfair procedures. Judge Noonan found that it would be extraordinary if the mere fact of attendance at a school over 50 years ago were to be regarded as sufficient to disqualify a person from hearing a statutory appeal involving that school. He also held that there had been no breach of fair procedures in not allowing the admission of a document from the Chairman’s Facebook page. It was determined to be irrelevant and would have had no bearing on the outcome of the appeal

This judgment is an interesting decision on the issue of bias and fair procedures. From a school’s perspective it is important to keep in mind that the expulsion of a student is considered a last resort and only to be used in the most serious of situations. Boards of Management need to be aware of the need for fair procedures at all stages of the process.

If you would like to discuss the decision in greater detail, please contact a member of our Education team.