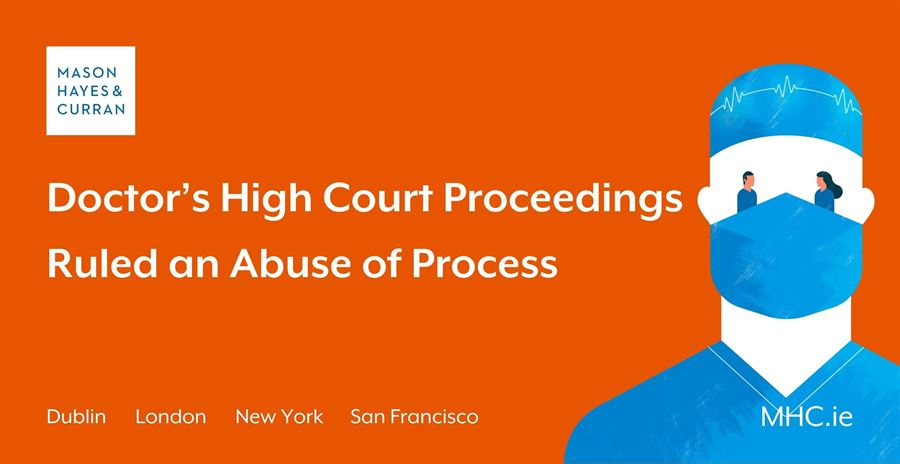 GP Dr Samuel Van Eeden was prosecuted, and subsequently acquitted, of the importation of medicinal products without a manufacturer’s authorisation, and of having procured the medicines without a marketing authorisation, in 2012. When the Medical Council (Council), became aware of those proceedings, a complaint was made to the Council’s Preliminary Proceedings Committee. This complaint was referred to the Fitness to Practise Committee in 2015, and a Notice of Inquiry was served on Dr Van Eeden in 2016.

Dr Van Eeden has tried to halt these proceedings since 2017. In April of the same year, he sought leave to judicially review the Council’s decision to undertake an Inquiry. When this was unsuccessful, he issued proceedings against the Council seeking declarations regarding the proposed holding of an Inquiry.

In his judgment, Mr Justice Twomey considered that Dr Van Eeden was “challenging the decision of the CEO of the Medical Council to issue a Notice of Inquiry.” He considered that this was essentially a matter of administrative decision-making/exercise of discretion of a public authority, and in substance, was judicial review by another, improper, means.

While Dr Van Eeden was refused leave to bring a judicial review in 2017, Mr Justice Twomey agreed with the Council’s position that the issues raised by Dr Van Eeden should more properly have been argued then. Having not done so, and given that all the facts Dr Van Eeden was relying on were available to him when he received the Notice of Inquiry in 2016, the current proceedings amounted to an abuse of process. On that basis, Mr Justice Twomey considered that the proceedings should be struck out.

Justice Twomey observed that proceedings of this nature can have a “chilling effect” on administrative activity. He added that it is important that decision-makers have as much certainty as possible surrounding their decisions. Mr Justice Twomey underlined the importance of having finality “at the earliest opportunity” on decisions or actions which can be the subject of judicial review proceedings, or those which are judicial review in substance.

This finality is to ensure that administrative activity, of all types, is not unduly curtailed. Mr Justice Twomey considered that there is a “strong public interest” in claims being made as early as possible. This seeks to limit situations like those that arose here, where no Inquiry had taken place five years after a Notice of Inquiry had been served. Mr Justice Twomey found that there was a “very clear prejudice” to the Council arising from Dr Van Eeden’s failure to raise all the issues he could at the time he brought judicial review proceedings.

Res judicata and claims of discrimination

He added that, even if the same matter had been decided by the District Court, there was a legitimate public interest in the Medical Council investigating the matter, to ensure that the public can “have trust in the medical profession generally and doctors individually.”

Similarly, Mr Justice Twomey disagreed with Dr Van Eeden’s claim that the holding of an Inquiry would constitute a breach of Article 40.1 of the Constitution, and his right to equal treatment. He argued that a non-professional person acquitted of a criminal offence would be free to return to work with no restrictions. Mr Justice Twomey considered that it was “perfectly legitimate” for different standards to apply to health care providers as a matter of public interest, given the “position of trust which they occupy”.

Strict time limits are imposed on the exercise of the High Court’s function in judicial review, other than in exceptional cases. In those latter cases, there must be “good and sufficient reason” for extending the time limit. The failure to seek review at an earlier point must also have been outside the control of the applicant or could not reasonably have been anticipated by them. In this case, where the facts grounding Dr Van Eeden’s application were known to him in 2016, he was not permitted to seek to bring judicial review proceedings under another guise.

This decision is welcome further confirmation of the courts’ position that litigants must raise matters at the earliest opportunity. Failure to do so, other than in the most exceptional circumstances, will be a bar to relief. While the courts should be utilised in appropriate circumstances to allow for oversight of the exercise of public authority, the available mechanisms cannot be abused.

Public bodies and those who make their decisions should be comforted by Mr Justice Twomey’s decision and by time-bound limitations for review of their decision-making. While decisions can be subject to appropriate review, the judgment is a warning against improper use of court time and public resources.

For more information or with any questions, contact a member of our Public, Regulatory and Investigations team.