Dispute Resolution During the COVID-19 Pandemic 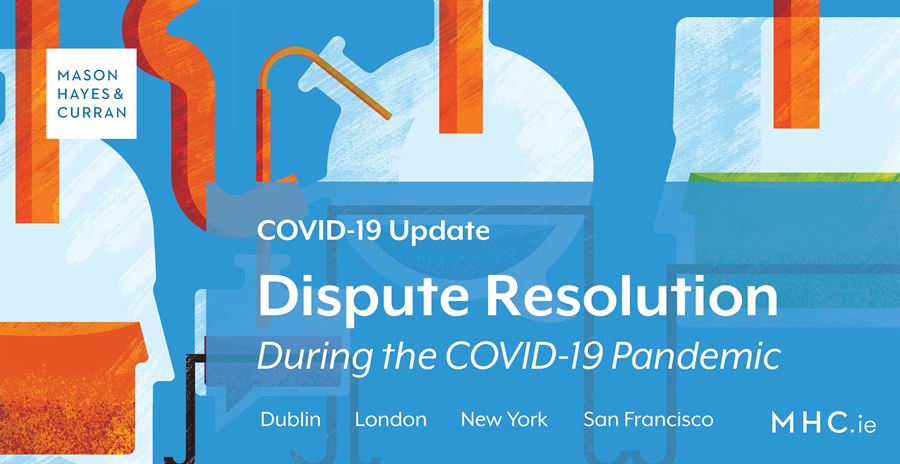 The Courts Service recently announced widespread general adjournments of non-urgent applications and other cases. This, coupled with the Taoiseach’s speeches on 24 and 27 March announcing that persons should only attend work in exceptional circumstances and where essential services are being provided, has had a massive impact on the ability of parties to progress on-going litigation.

The Courts Service announced plans, on 31 March, to facilitate remote court hearings which would comply with the constitutional obligation that justice be administered in public by granting access to the press and the presence of the Court Registrar in the court. It is hoped that a pilot facility will be available for the new law term which begins on 20 April. This decision reflects the reality that while many matters are not urgent they should be dealt with promptly and cannot be subject to an indefinite period of adjournment. This will continue to evolve as the courts come to terms with engaging with the various technologies available, parties’ rights and public access.

It should be remembered that the current crisis does not restrict the general ability of persons to issue proceedings. The Courts Service has stipulated that any attendance at public offices, such as the Central Office of the High Court, is for urgent business only, and all other communications should be by phone, post or the use of drop box facilities.

So far no measures have been introduced for the continued running of limitations periods. Therefore it should be taken that the Statute of Limitations is operating as normal. The Law Society is pressing for an amendment to the Statute to protect the interests of solicitors and their clients.

The Mediation Act 2017 introduced a new pre-condition for solicitors issuing proceedings on behalf of clients through the swearing of a declaration that they have advised the client on mediation. Mediation involves a neutral third party facilitating the negotiation of a dispute through to conclusion by means of a mediated settlement.

The current restrictions on operations of the courts accentuate the relevance of mediation, as an alternative immediate option. We are involved in a number of mediations which are continuing through the use of video conference technology.

For additional information on the application of the Mediation Act 2017, see our recent article here.

The current crisis has also opened up  the possibility of arbitration, where parties agree to have their dispute resolved by an independent third party arbitrator. The Arbitration Act 2010 incorporated the UNCITRAL Model Law in Irish law. Article 8 of the Model Law requires a court to refer the parties to arbitration, unless the arbitration agreement is found to be null and void, inoperative or incapable of being performed.

Arbitration case management can be carried out by the relevant arbitrator, or by a virtual arbitration platform. Both of these methods would involve the filing of various documents such as statements of claim and witness statements. Arbitration hearings are very similar to a court case because of the determination’s binding nature. Virtual arbitration can provide a viable option to parties in circumstances where, unlike our courts, there is no obligation to conduct hearings in public.

Not even the Coronavirus can deprive parties of their Constitutional right of access to justice. This means that hearings can be arranged for cases where there is a real urgency. Hearings can also be facilitated if they are likely to be short in duration and involve a small number of participants.

In addition, the courts are currently exploring the possibility of holding interlocutory and case management applications remotely, using applications such as Zoom. Last week the UK Supreme Court heard submissions by video link. There seems to be no reason why this should not occur in our courts once the Press are allowed access to the process and can report on it.

The Chief Justice in his most recent announcement has noted that judges will strive to bring their delivery of reserved judgements up to date. The Courts Service has announced that the default position for now will be that written judgments of courts will be delivered by means of a copy of the judgment being sent electronically to the parties and posted on the Courts Service website.

Restricted access to the courts and restrictions on other gatherings do not need to unduly curb the availability of dispute resolution. There are now opportunities for new channels of dispute resolution to be explored which allow for innovations that will hopefully outlast the vestiges of COVID-19.

For more information on successfully achieving favourable resolutions to your disputes during the COVID-19 crisis, contact a member of our Dispute Resolution team.

COVID-19: The Irish Courts and the COVID-19 Crisis

COVID-19: Impact for the Banking Sector