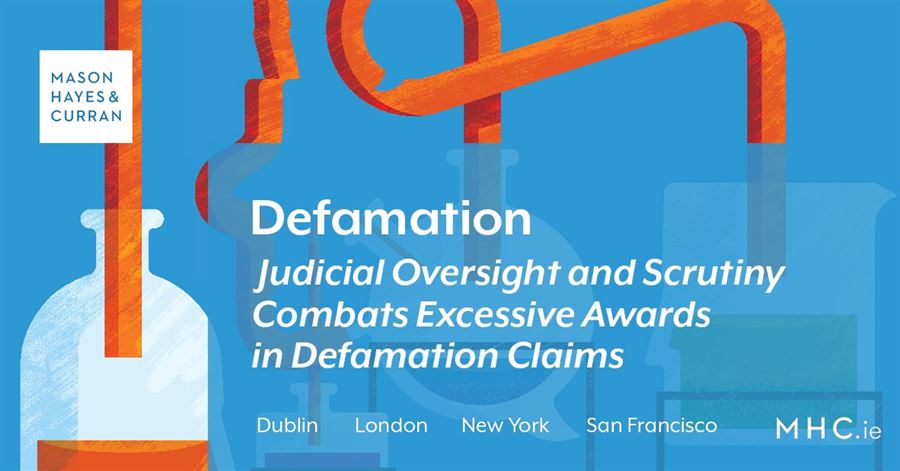 Although the right to trial by jury has been removed in most civil proceedings in Ireland, it has been retained in defamation claims before the Irish Superior Courts and importantly, the assessment of damages remains a role for juries.

Prior to the 2009 Defamation Act, a number of high awards of damages by juries led to criticism of the Irish defamation regime for having a chilling effect on freedom of speech.  Recent jurisprudence, including the decision of the Irish Court of Appeal in Kinsella v Kenmare Resources, indicates a judicial willingness to scrutinise jury awards and marks a move towards more measured awards of damages.

Trends in damages in defamation claims

A number of high profile defamation cases in the late 1990s and the 2000s saw a series of escalating awards made by juries to successful plaintiffs. In 1999, Denis O’Brien was awarded IR£250,000 (€317,000) following a finding that he had been defamed by an allegation that he bribed a Government minister and engaged in corrupt practices. When the Supreme Court found the figure disproportionate and sent the case back to the High Court for retrial, the jury more than doubled the award to €750,000. In 2008, a jury awarded Martin McDonagh €900,000 where he was wrongly accused by a newspaper of being a “Traveller Drug King” and a loan shark. In 2009, a jury awarded former Government press adviser Monica Leech €1.87 million for defamation arising from a statement that she had an affair with a Government minister and profited from the relationship. This was later reduced to €1.25 million by the Supreme Court on appeal.  The highest jury award came in 2010 when Donal Kinsella was awarded €10 million for defamation arising from a press release which stated that he was to resign from a senior position in Kenmare Resources because of an incident involving a female colleague on a business trip.

The question of damages in defamation and the escalation of awards proved highly controversial leading ultimately to statutory amendment in this area by way of the Defamation Act 2009. In addition, in 2017, the European Court of Human Rights highlighted the dangers of unpredictably high damages when it ruled that Ireland had breached Article 10 of the European Convention on Human Rights on freedom of expression after Independent News and Media had argued that the €1.25 million defamation award by the Supreme Court to Monica Leech had a chilling effect on journalism.

Two cases heard by the Court of Appeal in 2017, Christie v TV3 and Speedie v Sunday Newspapers Ltd, were dealt with under the new 2009 framework. In Christie, the Court of Appeal reduced the amount of damages awarded by the jury from €200,000 to €60,000 prior to applying a further discount of 40% on account of the use of the “offer of amends” procedure set out in the 2009 Act, reducing the final award to €36,000. In Speedie, the Court rejected the plaintiffs argument that damages should be increased and held there was no basis for interfering with the jury’s award of €85,000.

In Kinsella v Kenmare Resources, the Court of Appeal examined the €10 million in damages awarded to Donal Kinsella in 2010. The Court engaged in a comprehensive analysis of the authorities in this area, considered what was proportionate, and ultimately reduced the award from €10 million to €250,000. The Court of Appeal highlighted the factors to be considered in assessing proportionality and this included a comparison of awards in other defamation actions as well as in personal injury actions.

One reason for excessive awards in the past was that those cases were heard under the old, pre-2009, defamation rules. In these cases, juries were only allowed general directions from the court as to the quantity of damages to be awarded. Defamatory statements made after 1 January 2010 come under the Defamation Act 2009 which provides for more detailed directions from the court to juries on the quantum of awards (s.31).

Although the appellate courts in Ireland have a common law power to set aside and substitute an award where the award is so disproportionate that no reasonable jury would have made it, the 2009 Act also gives an explicit substituting power to the Supreme Court and the Court of Appeal even in circumstances where the jury award is not obviously disproportionate (s.13).  An equivalent provision in the UK has led to an accepted maximum level for appellate court approved awards and the jurisprudence there indicates that the maximum figure the Court of Appeal of England and Wales will sanction is Stg£275,000 to Stg£300,000.  It is logical to assume that the Irish appellate courts will continue to provide similar guidance on what is now acceptable to award in such defamation cases to that provided in recent appeal cases such as Christie, Speedie, and Kinsella. This is likely to make windfall defamation awards running into the millions a thing of the past in Ireland.

For more information relating to successful resolution of defamation claims, contact a member of our Dispute Resolution team.

This article was written by Colin Monaghan and Louise Mitchell. The content of this article is provided for information purposes only and does not constitute legal or other advice.