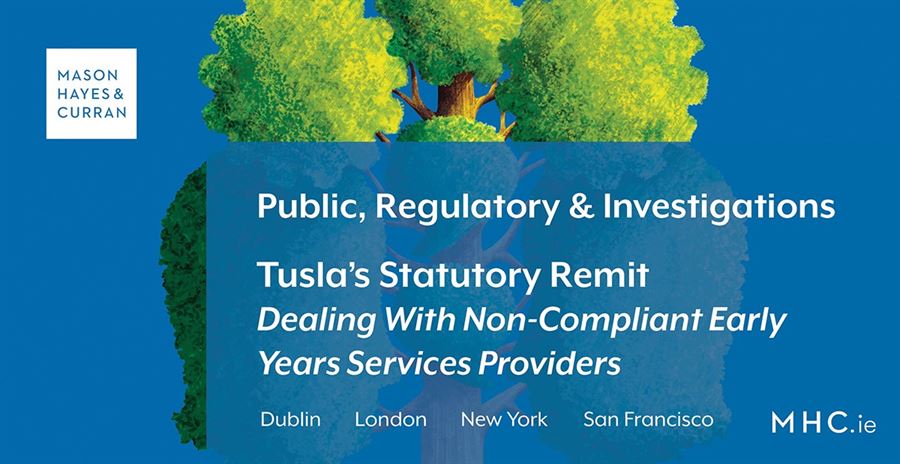 It is a fundamental principle of administrative law that a public body may only do what it is empowered or required to do by statute, whether expressly or by necessary implication, and must also act in accordance with its statutory functions and duties.

The Child and Family Agency, also known as Tusla, is the regulator of childcare services in Ireland. The agency and its powers have come into sharp focus recently, following RTÉ’s Prime Time Investigates documentary, “Creches, Behind Closed Doors”. In particular, Tusla’s powers, or lack thereof, to address poor standards in certain crèches in Dublin and other issues of non-compliance by early years services’ providers. We explore the extent of Tusla’s powers in this area.

Tusla’s powers governing the supervision of early years services are provided in Part VIIA of the Child Care Act 1991, as amended.[1]

Tusla has limited powers in dealing with registered early years services where issues arise, or with unregistered services.

Tusla has the following powers to enforce Part VIIA of the 1991 Act:

Tusla does not have statutory authority to shut down a registered service where it determines that a provider is not in compliance with the Early Year Services Regulations, or a provider that is operating an early years’ service without ever being registered.

In respect of a non-compliant registered provider, Tusla can deregister the provider by the giving of 21 days’ notice, which is appealable to the District Court. Deregistering a provider does not, however, guarantee that it will in fact cease operations.

Tusla also has the power to apply to the District Court for a warrant to enter and inspect any premises where it has reasonable grounds for believing that it is an unregistered or deregistered early years service.

If a deregistered or unregistered provider continues its operations, Tusla does not have the statutory authority to shut down such operations. At present, Tusla would have to issue legal proceedings in the District Court for an order requiring the provider to cease operations. On conviction, the provider may be liable to a fine and/or a prohibition order preventing it from operating early years services for a specified period.

Tusla is also constrained in its ability to inform parents about any concerns regarding registered and unregistered providers of childcare services. At present, parents can only be informed about potential child protection issues affecting their child if that child has been specifically identified as being at risk. Tusla does not, however, have any statutory or legal basis to contact parents if it has concerns regarding a provider.

Since RTÉ’s documentary, Tusla and the Minister for Children and Youth Affairs have recognised the requirement for changes to strengthen Tusla’s enforcement powers for early years services

When it appeared before the Oireachtas Committee on Children and Youth Affairs to answer questions arising from the documentary, Tusla expressly called for greater powers to more effectively regulate the sector.[2] The Minister has also instructed that a Professional Regulator for the sector be established and asked for a review of regulatory powers nationally and internationally to ascertain what additional powers can be given to Tusla in this regard.

New powers being explored include:

Tusla’s powers in regulating early years services will also be further extended, with the recent announcement by the Minister of plans to extend the scope of regulation and inspection to all paid, non-relative childminding carried out by the childminder in their family setting.[3] We await these developments with interest.

For more information on the scope of Tusla's powers and the future regulation of this sector, contact a member of our Public, Regulatory & Investigations team.