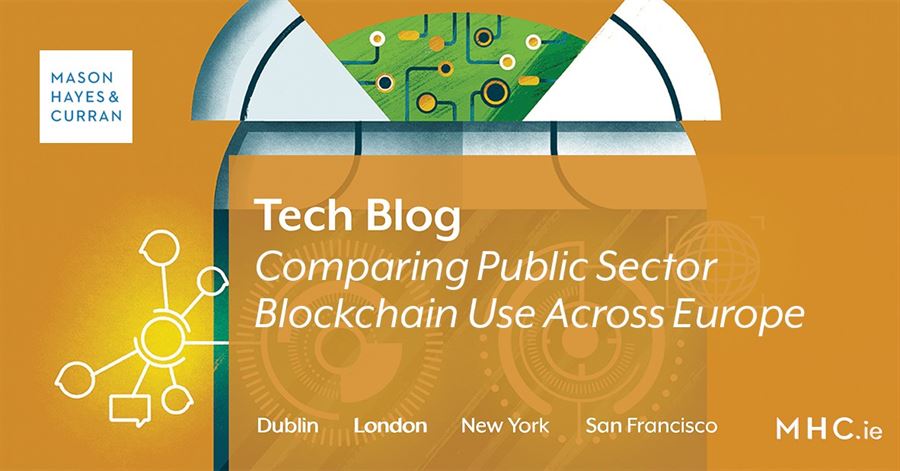 Blockchain technology has the potential to transform a variety of public sector functions. GovChain, a non-profit research group, has published a report comparing the adoption and regulatory treatment of blockchain in the public sector across 20 countries. We look at how the report ranks the EU, the UK and Estonia, and what lessons Ireland can learn from the experiences of the surveyed countries.

Territories like the UK, Estonia and the EU are ranked as ‘green’ on the report’s traffic light system. Green ranked territories are implementing blockchain friendly policies or are testing the technology in the public sector in proof of concept projects or other trials.

Countries like France are seen as ‘orange’ as their public sector is investigating the potential of blockchain but haven’t fully committed to it.

China and Brazil are judged as blockchain sceptics and therefore fall under the ‘red’ category. This is largely due to not adopting any public sector blockchain projects or general government suspicion towards the technology.

The report indicates that the British government has been assessing the potential applications of blockchain for some time. The UK government’s innovation agency announced it is investing £19 million into the technology. There is a parliamentary group tasked with analysing the impact of blockchain and the positive effects that it can bring to the UK economy in both the public and private sectors.

The UK public sector has been exploring the use of blockchain in areas such as national security, taxation, food standards, cyber-security and public procurement. It has also tested blockchain systems that may be able to implement social welfare payments distribution, streamline immigration and customs processes, and facilitate a digital land registry system.

Estonia is praised in the report as one of the earliest adopters of blockchain and distributed ledger technology (DLT) at a governmental level. It is well known that Estonia has been testing and implementing blockchain for public services for many years. As early as 2007, the Estonian government was testing blockchain applications as part of a resolution to be resilient to outsider cyber-attacks.

The Estonian government has recently trialled blockchain solutions across a wide range of government services, including the national health, legal, security and commercial code systems. For example, Estonia’s e-health record system uses blockchain technology to help ensure data integrity and security. Examples like this demonstrate how the Estonian government is harnessing the power of blockchain in its public sector.

Irish stakeholders will be most interested in how the report ranks the EU. Thankfully, it gives the EU a ‘green’ light in recognition of its approach to blockchain.

The report praises EU policymakers for measures they have put in place to promote blockchain and encourage its adoption in the public sector. The EU Parliament’s policy document on Blockchain from December 2018 identifies the benefits to member states of widespread blockchain implementation. It also recommends gradual policy steps to enable the technology to function across the public and private sectors.

Nearly all EU member states, including Ireland, have joined the EU Blockchain Partnership. The ambition of the partnership is to develop a trusted, secure and resilient European-wide blockchain services infrastructure.

The EU has also set up the EU Blockchain Observatory & Forum which aims to accelerate blockchain innovation and the development of blockchain within the EU.

Drawing on the experiences of the areas analysed in the report, GovChain recommends that all governments should look at the successes of blockchain in the ‘green’ ranked areas. They should also consider the benefits of upgrading their own public sector digital systems to use blockchain and distributed ledger technology. While the report highlights that there is varying level of adoption of blockchain across the surveyed countries, it allows those interested from an Irish perspective to understand the emerging trends and patterns, such as the use of innovation hubs and regulatory ‘sandboxes’ for testing. As can be seen from the UK and Estonia, there is potential to use blockchain across many public sector areas. In addition, the latest legislative initiatives in the EU certainly suggest a strong will to build a solid regulatory framework that would include Ireland.

How can Ireland get in on the act?

Ireland has made recent progress but there is still a lot of work to do to catch up with other EU member states. Having a clear plan and vision when it comes to adopting blockchain for public sector IT systems is vital to ensuring success. It will also require appropriate technical expertise and sufficient resources to test and refine the practical applications. This initiative needs to be supported by both the public and private sector, through a mix of collaboration, investment and innovation.