Civil Procedure: What Take-outs are there from the FBD Decision? 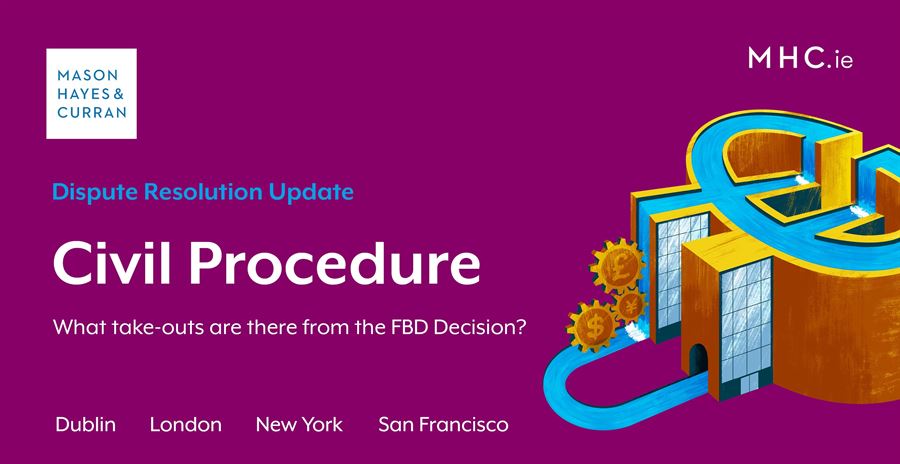 Irish publican and hotelier policy holders and insurance companies collectively held their breath while awaiting the result of the FBD case. The High Court delivered its judgment last month and found largely in favour of the four publican plaintiffs on all but one aspect of their claim. Our Insurance and Risk team have published an analysis of the case itself.

While the dispute primarily concerned an insurance policy, the judgment clarifies several issues relating to contract law, and civil procedure in general. We review the legal issues dealt with in this case.

Exception to the rule against extrinsic evidence

There is a well-established rule of contract law that prevents extrinsic evidence from being admissible for the purposes of varying, contradicting or subtracting from the written terms of an agreement. It follows that evidence concerning the behavior of parties after they have signed a contract cannot be considered in the interpretation of the contract.

Notably, in the FBD decision, the High Court considered an exception to the traditional rule. The plaintiffs wished to admit in evidence a folder of internal FBD communications which included discussions of its potential exposure to COVID-19 related business interruption claims by pubs. These discussions came after FBD entered into the insurance contracts with the plaintiffs.

FBD objected to the admissibility of these documents on the basis of the rule. They argued that any intentions referenced or expressed in the folder and any conduct of FBD following the conclusion of the contract were not admissible in evidence.

The High Court agreed that the rule against extrinsic evidence did not preclude the admission of this evidence.

Interestingly, following this ruling, FBD decided against pursuing the business efficacy argument and consequently the FBD folder was not admitted into evidence.

The FBD judgment also clarified the position on the admissibility of expert evidence in civil cases.

The Rules provide that expert evidence shall be restricted to that which is reasonably required to enable the Court to determine the proceedings.

The High Court noted the similarity to English Civil Procedure Rules and on that basis, it considered English case law in interpreting the provision. The Court noted that the burden of establishing that expert evidence is both admissible and reasonably required is on the party who is seeking to have the evidence admitted. Here, that burden fell on FBD.

The Court stated that the first question to be addressed was whether the evidence in issue was in fact admissible. The Court flagged, however, that just because expert evidence is admissible, it does not mean it should be admitted.

In order to determine whether evidence is reasonably required, the Court considered the English decision of British Airways v Spencer[1] and the approach it adopted:

The Court concluded that, as well as considering these three elements, a balance must always be struck to assess the proportionality of the admission of expert evidence.

The judgment provides welcome clarity on the criteria that must be established by a party seeking to admit expert evidence.

The essence of this judgement is that a court will not look beyond the written terms of a contract provided that they are sufficiently clear, thereby underscoring the importance of good legal drafting. However, in appropriate cases the courts will allow extraneous evidence on issues of a factual nature or where expert evidence may assist the court.

Looking forward, the issues of quantum and costs remain to be determined and are certain to be the subject of intense debate. Time has not yet been called on this case.