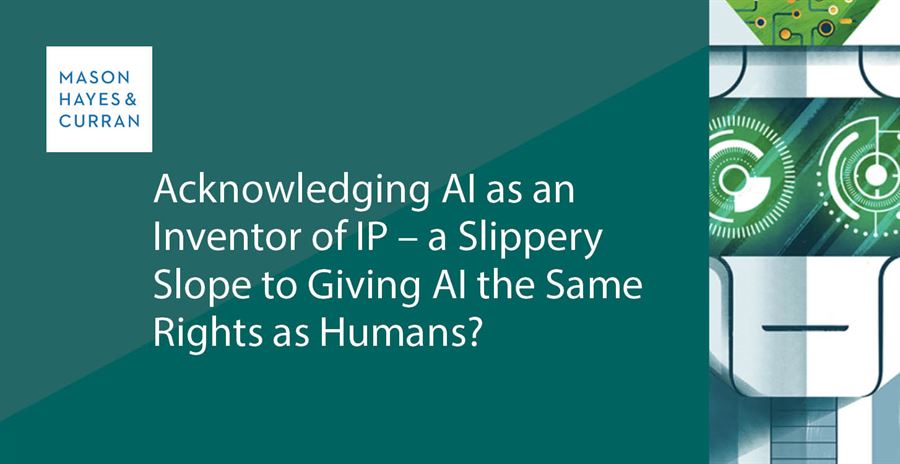 Recent patent applications were filed in the US, Europe and the UK which sought to identify the inventor of a particular patent as DABUS, an AI device. The applications were ultimately refused on the grounds that the inventor had to be a natural person. However, now the applicant has sought an appeal of the decisions of the EPO and the UKIPO. The inadequacies of IP law have been brought to light by the DABUS matter and the European Parliament have further addressed these concerns in their Report on Intellectual Property Rights for the Development of Artificial Intelligence Technologies 2020/2015.

In 2018 and 2019, an applicant, Stephen Thaler, attempted to file a patent with the USPTO, the EPO and the UKIPO which claimed that the inventor of the patent was in fact an AI machine by the name of DABUS (Device for the Autonomous Bootstrapping of Unified Sentience). The application claimed that DABUS had identified the novelty of its own idea before a natural person had and on that grounds should be identified as the inventor.

All three offices refused the applications on the basis that the legal frameworks applied by each of them require an inventor to be a natural person or human – of which DABUS, a machine, is not.

The European Patent Convention (EPC) stipulates that the inventor of a patent must be established by means of their family name, given names and full address. The EPO held that the interpretation of the EPC gave rise to the conclusion that the inventor had to be a natural person. The EPO further explained that in order to exercise the legal rights conferred by inventorship, one had to have a legal personality, of which “AI systems or machines do not enjoy.”

In the UK, case law suggests there are two requirements that must be fulfilled in order for an inventor to be the “actual deviser” of the invention. These are as follows:

On these grounds, the UKIPO agreed with the EPO that a “natural person” refers to a human. Both of these decisions are now under appeal.

The USPTO refused the patent application on the grounds that it did not “identify each inventor by his or her legal name.” The USPTO relied on the US Code which defines “inventor” as an “individual or…individuals collectively who invented or discovered the subject matter of the invention.” The USPTO cited the dictionary definition when reaching the conclusion that the word “whoever” suggests a “natural person” and further noted that an inventor who executes an oath or a declaration must be a “person”.

The patent office further relied on US Court of Appeal decisions in which the court indicated that “patent laws required that an inventor be a natural person.” In reaching its conclusion, the USPTO directed the applicant to the Manual of Patent Examining Procedure in which “conception” is defined as “the complete performance of the mental part of the inventive act” formed in the “mind of the inventor".

Ultimately, the patent office held that US law does not permit a machine to be named as the inventor in a patent application.

Issues arising from the decisions

The main issue at hand is whether an AI machine should be allowed to claim inventorship. On the one hand, the applicant claimed DABUS came up with the innovation by itself and to not recognize DABUS as the inventor would mislead the public.

However, that gives rise to the question: what level of input is enough for a human to still claim the status of inventor? If the DABUS decision acts as a precedent, AI devices will not be able to obtain patents identifying them as the inventor. In a worst case scenario this may lead to the inventions being un-patentable.

If we are to allow AI devices to claim the legal rights awarded to inventors, are we diluting the fundamental rights of humans by equating their rights to that of a machine? The European Parliament has already introduced a framework of ethical aspects of artificial intelligence in order to protect the fundamental rights of citizens in areas such as biased decision-making and discrimination. While the ethical framework doesn’t touch upon the IP rights of AI devices, the European Parliament released a Report on 2 October 2020 which acknowledges these concerns.

The Report considers the inadequacies of IP rights which need to be addressed in light of the developments around AI technologies and further emphasises that “creating an environment conducive to creativity and innovation by encouraging the use of AI technologies by creators must not come at the expense of the interests of human creators, nor the Union’s ethical principles.”

The Report states that “strong safeguards are crucial to protect the Union’s patent system against abuse...a human-centred approach to AI that is compliant with ethical principles and human rights is needed if the technology is to remain a tool that serves people and the common good.” Therefore, the Report recognizes technology as a tool to assist humans rather than it being a standalone entity and also that humans must be at the core of all AI in order for it to uphold its function.

In the Report, the European Parliament takes the stance that it would not be appropriate to impart legal personality onto AI technologies and they are of the view that to do so would have a negative impact on incentives for human creators. Furthermore, the Report points out that AI-generated creations create regulatory challenges for IP rights protection and raises questions of ownership, inventorship and appropriate remuneration, as well as issues relating to potential market concentration.

The European Parliament considered that works autonomously created by AI and robots, such as books and paintings, may not be eligible for copyright protection. To do so would not uphold the principle of originality which is linked to the natural person. On this basis, the European Parliament held that if such AI-generated works are to be considered eligible for copyright, the ownership of the rights should only be assigned to the natural or legal person that created the work.

The Report also includes the Opinion provided by the Committee on Culture and Education. In their Opinion, the Committee addressed the question of “the extent to which a work created by AI can be traced back to a human creator”, and draws attention to the “need to assess whether there is such a thing as an ‘original creation’ that does not require any human intervention.”

The Committee holds the view that “traceability should be an indispensable condition in allocating responsibility, as it acts both as a basis for legal action and enables the diagnosis and correction of malfunctions.” Therefore, it could be argued, a human is better suited to take responsibility for a creation, as an AI machine cannot be held accountable for its output.

Considering the recent DABUS decisions and the Report published by the European Parliament in relation to intellectual property rights for the development of artificial intelligence technologies, it appears that the shared standpoint across multiple jurisdictions is to safeguard human intellectual property rights by not allowing AI to claim those legal rights as their own. It will nonetheless be interesting to follow the appeals of the UKIPO and EPO decisions, but for the moment it seems that DABUS has been put back in its box.