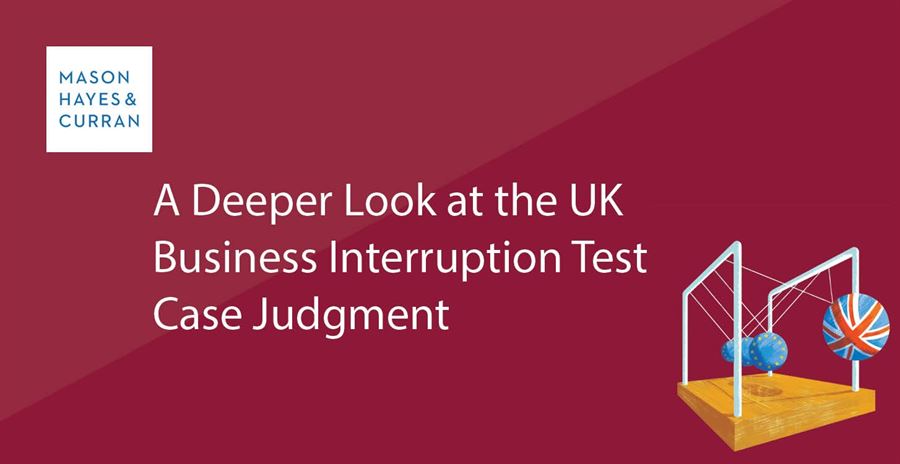 In this e-zine, we take a deeper dive into the judgment handed down on 15 September 2020 in the test case brought before the UK High Court by the UK Financial Conduct Authority (“FCA”) on behalf of the business interruption policy holders of eight specified insurers.

In the business interruption test case judgment the Court analysed various types of clauses found in each of the 21 policies, which were assessed. We look at the conclusions that were reached and their significance.

While prevention of access clauses were held to be subject to a more restrictive interpretation than disease clauses, some of the policy wording considered did allow coverage under those clauses. Holders of UK policies with disease or hybrid clauses similar to the samples assessed by the Court will certainly welcome the decision. Six insurers had issued a fast tracked appeal of the judgment to the Supreme Court, which was due to be heard before the end of the year. However, those appeals were withdrawn last week.

The position in Ireland remains undetermined as yet, pending the hearing of the FBD test case. Counsel for the various plaintiffs in the four cases being heard will certainly be asking the Irish court to take into account the FCA judgment.

FBD recently changed the wording of its commercial policies to specifically exclude COVID-19 which is perhaps reflective of the effect the FCA judgment has already had in this jurisdiction.

You can read our previous coverage of the UK case here: “A Victory for Business Interruption Policyholders: Landmark UK Test Case Judgment Handed Down”.