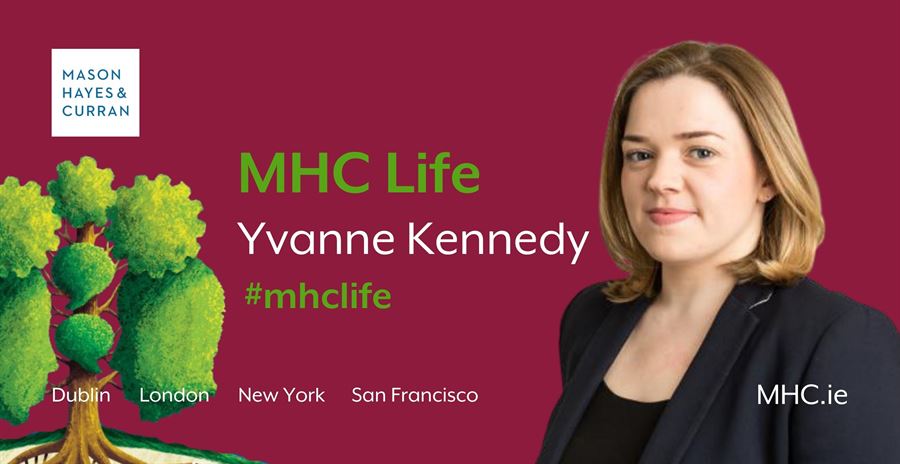 This week in our MHC Life Series, we speak to Public, Regulatory and Investigations Associate Yvanne Kennedy. Yvanne tells us about her journey to MHC and what led her to choose Law, her typical day working from home, and her newfound love for sport.

Tell us a bit about you and your career journey to MHC – What inspired you to get into this career?

My dad is a retired prison officer, and as soon as I was old enough, I was constantly asking about his work. He always believed in rehabilitation, and was appropriately compassionate, but realistic.  While I never wanted to follow immediately in his footsteps, I was always interested in how the legal system could be used in public service and in helping those in vulnerable times in their lives.

I briefly considered training as a barrister, but quickly realised that working as part of a team, and directly with clients, was too important for me. I trained in MHC and was lucky to have a position open up on the Professional Regulatory team just as I was qualifying. Our work is particularly people-centred, which I really enjoy, both with our clients and those who help with our investigations, as well as within the team. The work is varied and interesting, and there is a great sense of satisfaction which comes at the end of each case. There’s also just enough advocacy in our work to keep me on my toes – and to confirm that I made the right decision to stick to this side of the legal profession!

My first “job” was a lucrative babysitting operation! I translated those skills into my first “real” job which was as a teaching assistant on weekend courses and summer camps for primary school children. I always remember it being such a fun job, and I came home with the most hilarious stories that the children would tell us at any given opportunity. I worked there throughout college, and for some time after, and moved up to teaching law and criminology to secondary school and pre-college students.

This gave me a chance to talk to a captive audience on a weekly or daily basis, which frankly everyone at home was thrilled about, as I eased up on trying to tell them, and it was very rewarding to see the students develop over the length of a course. Some of my former students have ended up on the MHC internship in recent years, which is so great to see, but also very unusual because I could have sworn they were still teenagers! Tutoring or lecturing is something I’d love to pick back up, so hopefully the opportunity might arise again.

My non-negotiable starting the day is to leave the apartment for a walk before beginning work. Even if I can only fit in a short one, getting that time at the start of the day sets me up much better. That, and picking up coffee while out on the walk!

I listened to the book “Eat That Frog” during lockdown and now try to deal with the most complex piece of work when I first sit down. It doesn’t always happen, but it’s a good aim. I tend to spend a large part of each day on the phone, taking witness statements, following up with experts, or making hearing arrangements. I try to spread these calls out over the day if I can, but I’m much more likely to pick up the phone or ask someone for a Zoom now than I was previously. I’ve found, for me, when it’s suitable, it’s a nicer way to discuss issues with clients and the rest of the team and gives the chance to check in with everyone regularly as well.

Thankfully, I can finish reasonably early most days, and have been trying to schedule in some activity at least a few days a week now that we can again.  In the interest of balance, some days that’s going for dinner, some days it’s a bootcamp class, and other days it’s putting in time to stream the Great British Bake Off at the same time as friends in different parts of the world and commentating non-stop on WhatsApp to the point we miss what’s happening on screen. My partner is also a solicitor, which thankfully means the shop talk is necessarily limited, and we can both switch off when we’re finished for the day. That doesn’t stop us switching on some form of crime drama or documentary to “unwind” though!

I’m very much a city/active, more than a relaxing sun holiday person. This may have something to do with the fact I turn pink just looking at the sun, or possibly says I’m bad at sitting still. My favourite holidays were a US East Coast trip from Washington DC to Boston via New York and Philadelphia, and time spent touring the Amalfi Coast. I missed a trip to the Silverstone F1 Grand Prix earlier in the year as it was on the last weekend before non-essential travel re-started, so that will be something to reschedule into next summer. However, the trip I’m most looking forward to now is to visit family in Brussels, including to see the newest member of the family, my nephew, who I haven’t met yet. That will be a special one!

I was never a team sports person when I was younger, and my hand-eye coordination leaves a lot to be desired, but I recently started playing gaelic football - in a very casual way. Apparently, by some people’s standards, not picking up the ball during a match doesn’t count as a successful game, but I’m enjoying it! It’s another great opportunity to socialise with a different group and with really no pressure on play. It also makes sure I leave the desk behind at a reasonable hour on a Monday evening and is something to look forward to at the start of the week.

A Social Worker. Social Work was next on my CAO form behind Law, and I do sometimes wonder how things might have gone if I ended up following that path. I have huge admiration for so many working in that field, but I don’t think I would ever make the pivot into it now – I’m pretty set where I am!