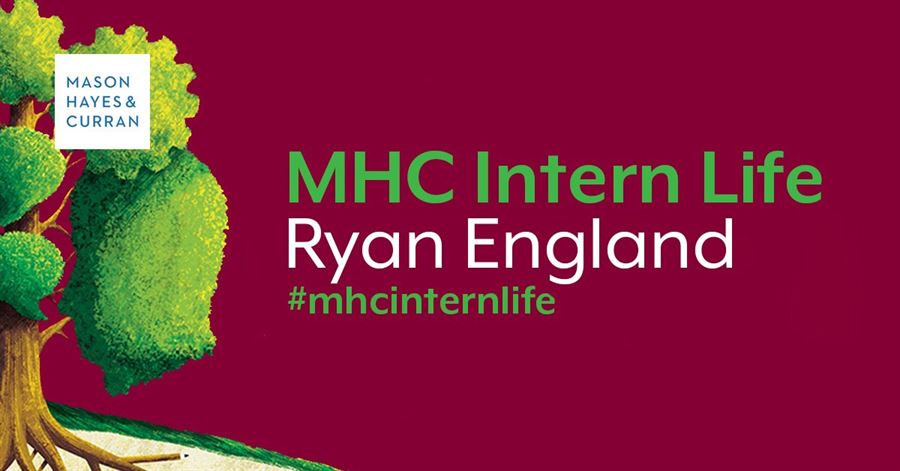 Ryan England tells us about his experience as an intern in MHC, studying in the Netherlands and working at Barack Obama Plaza.

What inspired you to venture on this career path/why did you choose law?

At first I was uncertain as to what career I should follow or what to study in university. The only thing I knew was that I did not want to pursue any career which heavily involved maths. Law was recommended to me due to it being a degree which would leave my options open, as the skills you learn during the course are present in a number of careers. There was also the fact that I would argue with anyone about almost anything. The longer I studied law the more interested I became, particularly with the problem-solving aspects of the law. I was also involved in mock trial in first year, which didn’t go very well as I was knocked out in the second round. However, despite my bitterness due to the loss, it did show me that law was a career path that I was interested in pursuing.

Where did you study and why?

I study in Trinity College Dublin which was unusual for someone from Offaly. All of my friends from back home went to NUIG. TThis was one of the main reasons I chose to study were I did- as it would give me more of an opportunity to branch out and meet new people. Of course my parents also had a say in the matter and they insisted that I put down Trinity. During the Leaving Cert, I was also concerned about living in a big city. This contributed to me choosing a university in Dublin, rather than the rest of Ireland.

The best thing about MHC for me has been how easy it is to communicate and get to know the other people I work with. I am only a new intern in the corporate department but the open plan working environment makes it easy to ask questions and get to know the people around you. There’s no need to panic about having to knock on someone’s office door, worrying about interrupting or disturbing them! The social life in MHC has also contributed to this environment. From the team building exercises with other interns to the volunteering which we did for An Taisce before heading out to a BBQ. All of this makes you feel like a part of the firm and that you are involved in it.

One of my favourite sports is tennis. I don’t take it particularly seriously but it’s a good game to play with friends during the summer months! Not to mention how enjoyable it is to watch, whether it be the French Open or Wimbledon. I’m also a big fan of skiing, sadly I don’t get the opportunity to very often in Ireland. However my family always try to go once a year and recently a lot of my friends have gone through university. Hopefully that will lead to more ski trips in the years to come!

Last year during my Erasmus I got the chance to study in Leiden in the Netherlands and it was one of the best experiences I have ever had. It’s an Old Dutch university city with canals and beautiful brick buildings. Think of Amsterdam without the tourists! It was also in a great location, nearby to The Hague, Rotterdam, Utrecht and Amsterdam making it a fantastic place for exploring the country.The Netherlands is such a fantastic country, it has such a relaxed and laid-back atmosphere which was so different from what I was used to after living in Dublin for my first two years of university. Living there for a year really allows you to immerse yourself in the culture, whether it was heading to Amsterdam for Kings Day or trying some stroopwafels and poffertjes.

My first job was dishing up pizzas in Papa Johns in the Barack Obama Plaza. It was an experience that really taught me how to work independently. After my third day I was thrown into the deep end, opening up the shop by myself and quickly trying to learn the ropes, be pleasant to any customers and ensure the food I was providing was up to scratch. It could be a particularly gruelling day after a big GAA game as hurling and Gaelic football fans alike descended into the shop leaving a queue out the door! It was at these times in particular where teamwork and communication were important. If your communication broke down it would mean huge delays, leading to angry customers. It was a learning experience which ensured I worked hard and communicated correctly with other staff, all the while providing a good customer service.