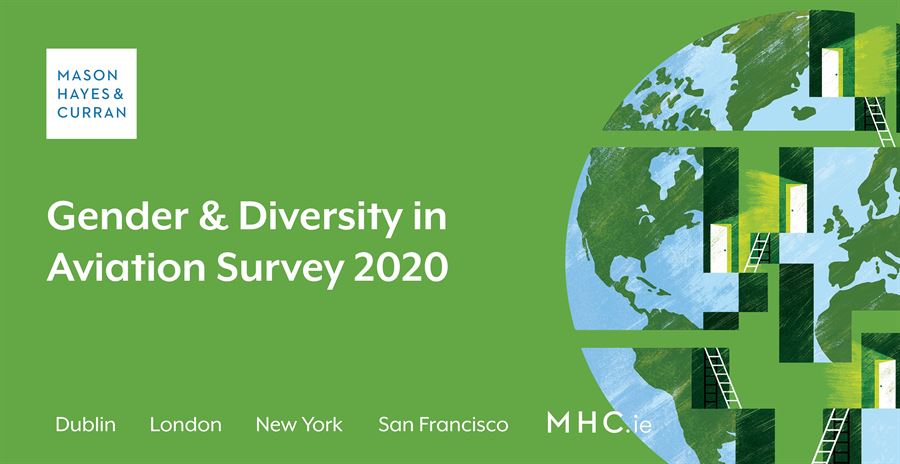 COVID-19: 30% more females than males believe working from home will have a negative effect on their promotional prospects

We have released the results of the Gender & Diversity in Aviation Survey 2020. This is the fifth year of the survey, which was carried out against the backdrop of the COVID-19 pandemic. The survey reveals that there is still no major uptick in the number of respondents stating that they are part of a minority group, but 23% of those surveyed stated that the percentage of females in senior roles in their organisations is greater than 30%, a significant increase on 2019 when only 16% of those surveyed reported that the percentage of females at senior level was 30% or more.

The 2020 survey data also shows that a significant number of female/ minority group candidates were hired at entry level within the last 12 months. 33% reported that more than 30% of candidates hired an entry level were female/ minority group candidates, however only 8% of those surveyed reported that more than 30% of senior level new hires were female or from a minority group. 53% of those surveyed stated that less than 10% of their board of directors are female or from a minority group. Diversity & Inclusion committees are not yet common practice in the industry, with a majority (53%) stating this year that their organisation does not have such a committee. However, this does show improvement on 2018, when 82% of those surveyed reported that their organisation did not have a Diversity Committee. The 2020 survey also shows a state of unpreparedness for gender pay gap reporting legislation, with only 12% of those surveyed stating that they were aware of their organisation conducting a gender pay gap analysis.

Commenting on the results, Christine O’Donovan, Head of International Asset Finance and Chair of Mason Hayes & Curran LLP, said “Since our last survey in 2019, the aviation industry has experienced a sustained and significant shock. The industry continues to be severely impacted by the COVID-19 global pandemic and the timeline for full recovery is uncertain. The focus for many in the aviation sector is on survival and demonstrating resilience. Given Ireland’s position as an aviation hub, the recovery of the aviation industry is key to the recovery of Ireland as a whole. Business leaders, by advocating for and promoting a diverse workforce, can foster positivity and confidence amongst employees as we all work to get through the current crisis.”

Unsurprisingly, those surveyed are pessimistic about the effect the pandemic will have on their careers. 48% of women and 37% of men state that they believe the current crisis and working from home will have a negative effect on their career, meaning 30% more women than men believe their careers will be adversely affected. A majority (53%) also believe that working from home during the pandemic will not shield employees from discrimination and unconscious bias. Despite all of this, 49% of females surveyed and 35% of males surveyed expressed a preference for working from home on a part-time basis, even after the COVID-19 restrictions are lifted. 18% of women and 19% of men surveyed stated a preference for working for full-time working from home, signalling changes which may affect our working lives for years to come.

“The pandemic has shown that many employees operate very efficiently and effectively from their homes, and this may become a feature of their working lives into the future”, continued Ms O’Donovan. “As we emerge from the current crisis, the aviation sector, like many others, may of necessity avail of more flexible working arrangements. The survey results repeatedly demonstrate that achieving a good ‘work life balance’ remains a persistent issue in aviation and adapting roles and job specification to facilitate home-working and flexible hours can address this issue and bring about some positive change and improvements.”

“The challenge now for leaders in the aviation industry is to keep diversity and inclusion high on their agendas”, concluded Ms O’Donovan. “As a global industry, aviation can take the lead as we emerge from the crisis, embedding a culture of equality and inclusion that will ultimately help the industry recover and thrive into the future.”