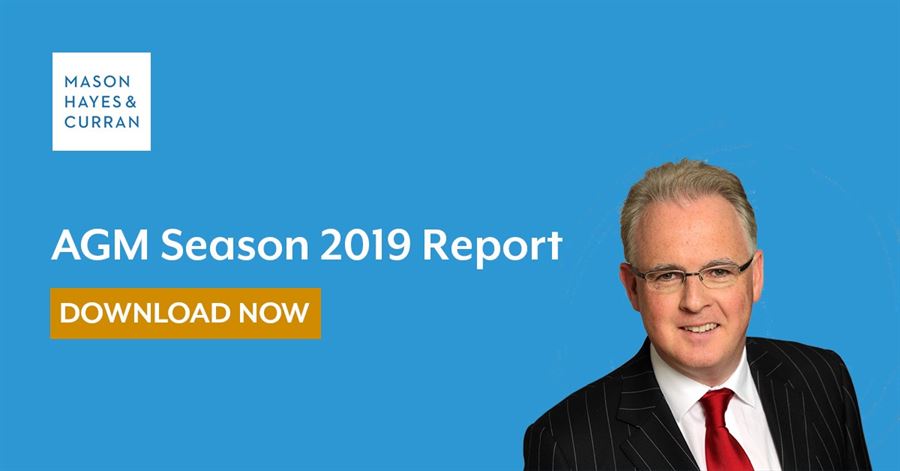 We have launched our AGM Season Report 2019, which provides an in-depth analysis and explanation of the issues that have arisen at annual general meetings of Irish listed companies in the 2019 season. Now in its 3rd year, the report looks at the resolutions typically proposed at the annual general meetings and provides statistics on the form, frequency and approval rate for resolutions during the AGM Season.

As mentioned in the previous reports, there is still no statutory requirement for Irish listed companies to put their remuneration reports or policies to a shareholder vote, advisory or otherwise. However, once the Shareholders’ Rights Directive (which came into force on 9 June 2017) which amends EU Directive 2007/36/EC on shareholders’ rights is transposed into Irish law, shareholders of Irish listed PLCs will be able to express their view on director remuneration twice.

Board Diversity
In the Institute of Directors in Ireland’s 2019 Diversity in the Boardroom report, 83% of respondents stated that board diversity leads to enhanced board effectiveness. We can see positive progress in 2019, with 25% of board seats on Irish listed PLCs are held by female directors, up from 19% in 2018. In 2018, 2 companies had no female directors. In 2019, only Datalex has an all-male board.

Trivia
Once again in 2019, the majority of AGMs of Irish main-market listed companies took place in May. The most popular day to convene an AGM in 2019 was a Tuesday, compared to a Friday in 2018. There were no AGMs convened in the months of February, March or August or on Mondays.