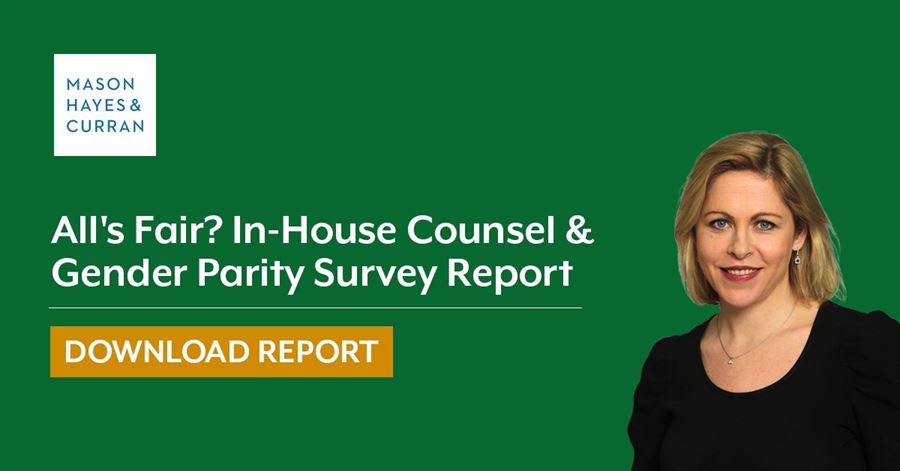 The majority of both male and female in-house lawyers in Ireland believe that the main cause of the gender pay gap is the role of family carer falling mainly to women instead of men. This was among the key findings of research carried out among in-house counsel in Ireland by Mason Hayes & Curran. Now in its second year, the survey was carried for the first time in 2018 amongst female in-house lawyers. This year both male and female lawyers are included.

58% of women and 41% of men surveyed believe the main cause of the gender pay gap is women tending to be the main carers for children and other family members.

“2019 has seen the introduction of new parental leave entitlements for employees in Ireland, but our survey data shows that there is still work to be done in order to encourage equality to begin at home with men taking leave at a similar rate as women to share the caring burden”, said Vanessa Byrne, Partner, Co-Head of Real Estate.

There is positive progress reported elsewhere in other key findings of the research. In the 2018 survey, 11% of respondents reported that more than half of the senior roles in their organisation were filled by females. In 2019, this rose to 18% of respondents, which represents a significant increase.

“The Gender Pay Gap Information Bill is likely to be enacted over the coming months, which means that many organisations will have a good deal of work to do in terms of preparing their data and communicating with their employees prior to publication”, commented Vanessa Byrne.

There is stronger support for interventions at an organisational level rather than government intervention as a way to fix the pay gap. The majority of respondents indicate that greater internal pay transparency and clearer communication from management on how pay and bonuses are determined would be the most effective ways to address the issue.

“There are now more practicing female lawyers in Ireland than male” said Vanessa Byrne. “This year’s results show that, despite these higher volumes of women entering the legal profession, they are still likely to encounter a pay penalty if the role of family carer falls on their shoulders. The publication of gender pay gap data, while by no means perfect, will shine a light on where inequalities may exist and encourage companies to formulate a plan around narrowing the gap.”