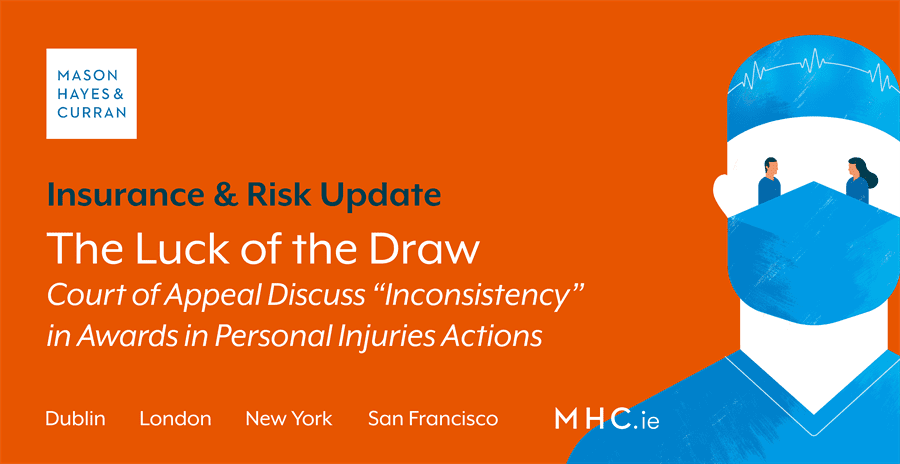 The recent judgment in Emma McKeown v Alan Crosby & Mary Vocella discusses the need for consistency and predictability in the assessment of damages in personal injury cases and points out that the level of awards should not be a “lottery”, depending on what judge is drawn.

The plaintiff was involved in a road traffic accident on 21 March 2017. The defendants conceded liability and the case ran as an assessment in the High Court.

The defendants appealed the decision on quantum and the plaintiff cross-appealed the award of €5,000 for pain and suffering into the future.

In the Court of Appeal, Mr Justice Noonan found that the plaintiff had sustained soft tissue injuries to her left shoulder, arm and hand, which had completely resolved within 4 months of the accident. However, her primary complaint related to her cervical spine. She was prescribed pain relieving medication for the first 10 months post-accident and used occasional over the counter medication after that. Her medical reports suggested that she did not commence physiotherapy for over a year following the accident.

At 2 years post-accident she was left with intermittent lower back symptoms which her orthopaedic surgeon felt would continue to improve over time. Overall, Mr Justice Noonan felt that there was nothing to suggest that the plaintiff was “inhibited in any way from leading a full and normal life”.

However, he did note that Ms Justice O’Hanlon had focused on the fact that the plaintiff had been required to change jobs as a result of her back issues. In her opinion, the plaintiff had “suffered a significant enough loss of the amenities of life as shown in the job changes that she had to make to keep in the workforce and I admire her hugely for that”.

Factors to consider when assessing damages in personal injury cases

In the Court of Appeal, Mr Justice Noonan focused on the requirement for consistency and predictability in assessing damages in personal injury cases and he outlined the following factors which should be considered by the court:

Mr Justice Noonan also noted that there is “potential for injustice” arising from the fact that the judge “drawn” can result in varying outcomes. He said that “it cannot be fair to either the plaintiff or the defendant that the value of their case depends on the identity of the trial judge” and that “personal injury litigation should not be a lottery”.

In allowing the defendants’ appeal and dismissing the plaintiff’s cross appeal, Mr Justice Noonan awarded the plaintiff €25,000 for her lower back injury and €5,000 for her neck and shoulder injury. He awarded €5,000 for pain and suffering into the future and the agreed special damages of €6,000, bringing the total award to €41,000.

In coming to his decision, he carried out an extensive analysis of the factors outlined above and in particular of the various bands/injury levels in the Book of Quantum. He placed her back injury in the moderate category, which attracts damages of €21,400 to €34,000, and said that it would have fallen within the minor category had it not been for the findings of the trial judge that the plaintiff was required to change jobs as a result of the injury. He placed her neck and shoulder injury in the minor category, which attracts damages of up to €14,800.

He also noted that “the trial judge’s award was not proportionate when viewed against the measure of the maximum award for the most serious injury” and that it did not bear “any relation to the range identified in the Book of Quantum”.

The decision of the Court of Appeal is a useful restatement of the factors to be considered when assessing damages in personal injury cases. The focus on consistency and predictability regardless of the trial judge assigned to the hearing will be widely welcomed by all parties to litigation.

It is particularly interesting that Mr Justice Noonan made specific reference to the fact that the courts are aware of the impact of their decisions on the cost of liability insurance, which has been a contentious issue in the media for some time.

It is certainly a very encouraging decision from the perspective of insurers and defence practitioners and follows a distinct trend over the last year or so of more positive judgments which we continue to watch with interest.

For more information, contact a member of our Insurance & Risk team.