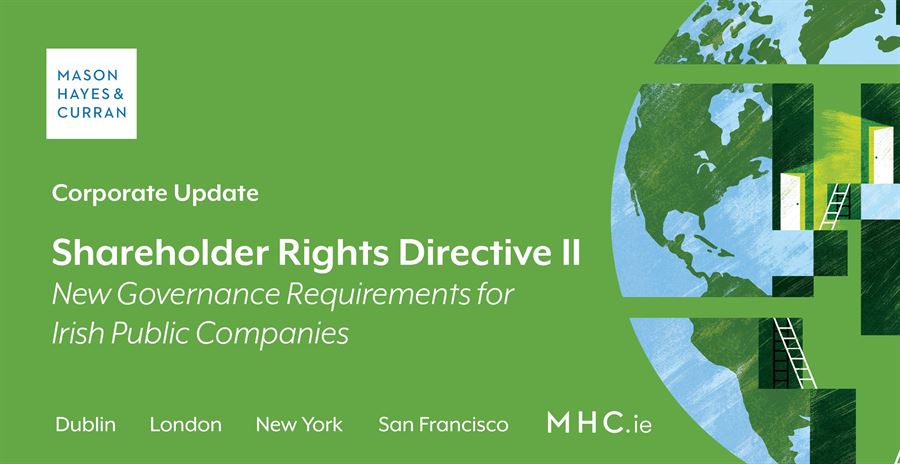 The Irish regulations implementing SRD II were adopted in March 2020. They introduce three new chapters into Part 17 of the Companies Act 2014, covering the three principal subjects of SRD II:

Chapter 8B, which is addressed to institutional investors, asset managers and proxy advisors, takes immediate effect. Read our article on this Chapter here.

Chapter 8A, which contains provisions relevant to issuers, is principally addressed to shareholder intermediaries, and takes effect from 3 September 2020. Read our article on this Chapter here.

For issuers, the obligations in Chapter 8C are predominantly matters that will not be relevant until the 2021 AGM season at the earliest. As for SRD I, the issuers in question are Irish PLCs listed on regulated markets, such as the regulated market of Euronext Dublin or the Main Market of the LSE. In Ireland, however, the obligations specifically exclude UCITS and AIFs (traded PLCs).

For traded PLCs, many of the new obligations are either not new in practice, e.g. shareholder approval of remuneration reports and policies, or already apply to them via the applicable Listing Rules, e.g. related party transactions.

The Regulations require traded PLCs to prepare a remuneration report and remuneration policy on directors’ remuneration, both which must be voted on at general meetings:

By default, resolutions on a remuneration policy or report are advisory only, unless the traded PLC provides for such resolutions to be binding via its constitution.

While these requirements are new in Irish law, it has been the practice of almost all Irish traded PLCs to follow the example of UK PLCs, which have long been required by the UK Companies Act 2006 to hold votes on directors’ remuneration reports and remuneration policies. As a result, the new SRD II requirements do not require any substantive change in existing practice for Irish traded PLCs.

However, certain additional information requirements are required by SRD II that must be reflected in the remuneration policy and report. Some of the principal new obligations (compared to existing Irish/UK practice) can be summarised as follows:

For most traded PLCs, these “new” requirements will only impact annual general meetings from 2021 onwards, on the basis that:

The Regulations impose new statutory restrictions on traded PLCs for the disclosure and approval of related party transactions. The requirements in this area mirror to the existing Listing Rule requirements for a company with a listing on the regulated market of Euronext Dublin or the LSE.

Similarly, there are minor differences between the Listing Rules and the Regulations with respect to the announcement to be made in the case of a related party transaction:

Again, traded PLCs must check that any announcement satisfies both requirements.

Despite the differences identified above, in general terms, the requirements for the notification and approval of related party transactions will not be surprising for traded PLCs and broadly mirror their existing obligations under the Euronext Dublin or UKLA Listing Rules.

For Irish PLCs, the new governance obligations under SRD II are predominantly matters that will not be relevant until the 2021 AGM season at the earliest. As noted, the Regulations impose relatively few new obligations on PLCs, and in many cases, the new obligations are already widely practiced by or already applicable to Irish PLCs. However, PLCs should be mindful of their new statutory obligations and, in particular, of the slightly different requirements of the Listing Rules and the Regulations in this regard.