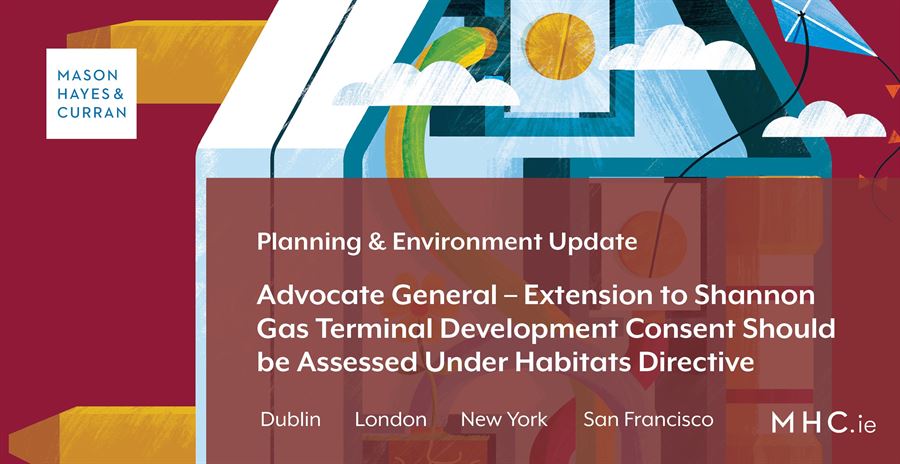 According to an Advocate General of the Court of Justice of the European Union (CJEU), an extension granted in 2018 to the development consent for the Shannon LNG gas terminal is subject to Article 6(3) of the Habitats Directive. Under that article, plans or projects not directly connected with or necessary to the management of a European site but likely to have a significant effect thereon, either individually or in combination with other plans or projects, shall be subject to appropriate assessment of its implications for the site in view of the site's conservation objectives.

In March 2008, An Bord Pleanála granted a 10-year development consent for a liquefied natural gas (LNG) terminal at the Shannon Estuary, County Kerry. The project site is located close to two special areas of conservation. The developer subsequently applied for and was granted an extension to the construction phase for a further five years to 31 March 2023.

Friends of the Irish Environment (FIE) challenged the extension decision before the Irish High Court. The High Court then referred questions to the CJEU on compliance with the Habitats Directive.

Obligation to carry out a prior assessment

In her Opinion published on 30 April 2020,[1] Advocate General Kokott concludes that the extension decision triggers Article 6(3) of the Habitats Directive. She considers a number of factors in coming to that view:

An assessment under Article 6(3) of the Habitats Directive must be carried out “where it cannot be ruled out, having regard to the best scientific knowledge in the field, that the plan or project might affect the conservation objectives for the site”. An earlier assessment of the same plan or project can rule out that risk only in so far as it contains complete, precise and definitive findings capable of removing all reasonable scientific doubt as to the effects of the works.

According to the Advocate General, the screening exercise to be carried out by the authorities should close any gaps in the earlier assessment of the project. It should also take account of whether:

The Advocate General’s Opinion is not binding, although the CJEU in the majority of cases follows the Advocate General’s reasoning in its judgment. The judgment will be watched with interest by parties seeking extensions of expiring development consents, particularly where the original consent was granted at a time when the Habitats Directive was applicable, but the project may not have been assessed in compliance with it.

For more information on this development, contact a member of our Planning & Environment team.